Henry Ossawa Tanner was the United States’ first African-American celebrity artist. His training at the Pennsylvania Academy of Fine Arts (under the guidance of Thomas Eakins) and at the Académie Julian in Paris (with Jean-Léon Gérôme) put him in the unique position of having experienced two vastly different approaches to painting— American Realism and French academic painting. He was also one of the few artists to have had such training at a time when there were many barriers to education for African-Americans. Though Tanner lived most of his life in France and became well known for his lush biblical paintings, The Banjo Lesson is his most famous work and the painting that has become emblematic with his oeuvre.

Henry Tanner painted The Banjo Lesson in 1893 after a series of sketches he made while visiting the Blue Ridge Mountains of North Carolina four years before. Tanner had been studying and working in Paris until he developed a bout of typhoid fever and was advised to return to the United States to recover his health and dwindling finances. While taking up a teaching post at Clark University in Atlanta, Tanner’s doctor told him to take in some mountain air. His trip to North Carolina opened his eyes to the poverty of African-Americans living in Appalachia.

The legacy of slavery

The United States had abolished slavery only twenty-four years before, in 1865, and the physical and psychological wounds of that brutal institution would continue to be a palpable presence in African-American communities—especially so in the South. Though Tanner was born in Pittsburgh within the tight-knit world of highly-educated members of America’s burgeoning African-American intelligentsia, Tanner’s mother Sarah had been born a slave and had escaped north to Pennsylvania through the Underground Railroad. His middle name, Ossawa, was chosen by his father, Benjamin Tucker Tanner, a Methodist minister and abolitionist, after Osawatomie, Kansas—the site of the abolitionist John Brown’s bloody confrontation with pro-slavery partisans on August 30, 1856. Throughout his education and advancement in the art world in both the United States and Europe, the legacy of slavery haunted Tanner as he tried to establish a niche for himself as painter to be regarded on his own terms. The Banjo Lesson grew out of a set of photographs and illustrations (above) that Tanner made for the periodical Harper’s Young People in 1893. The illustration is of an elderly man teaching a young boy how to play the banjo, accompanied a short story by Ruth McEnery Stuart called “Uncle Tim’s Compromise on Christmas,” in which the titular character imparts his most prized possession, a banjo, to his grandson on Christmas morning. Tanner had spent years refining a style of his own that combined elements of American Realism and the European Old Master tradition. The Banjo Lesson has its roots in the genre paintings of African-Americans by William Sidney Mount and Thomas Eakins (above) and in Renaissance and Flemish paintings, notably Domenico Ghirlandaio’s An Old Man and His Grandson and Johannes Vermeer’s Woman with a Lute (below). While studying in Paris, Tanner was also inspired by the works of the French Realists, namely Gustave Courbet and Jean-François Millet, in their depictions of the rural poor. Millet’s The Angelus, with its quiet, intensely spiritual portrayal of a farmer and his wife praying amid the fields at dusk, is a palpable influence on Tanner’s The Banjo Lesson. 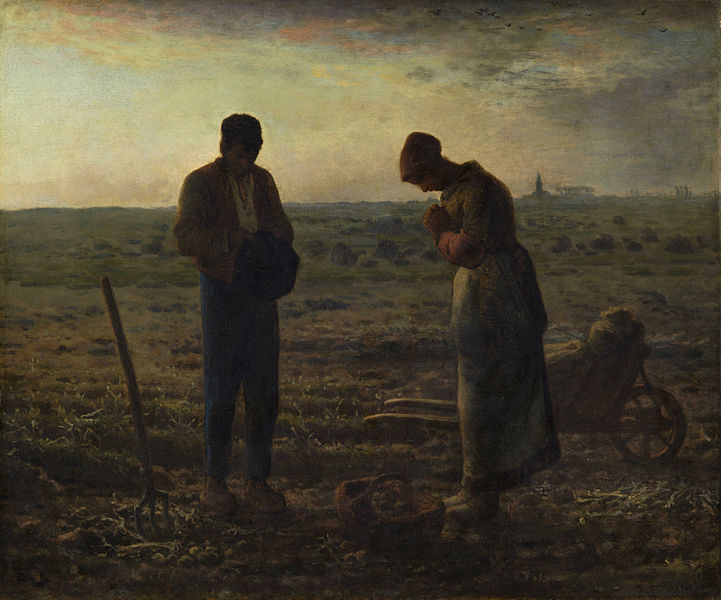 This theme of spiritual solace that Tanner encountered in the paintings of French Realists like Millet resonated with his own upbringing as the son of a Methodist minister. He hoped to find a way of highlighting the dignity and grace of poor African-Americans in the manner that he had seen in France—an approach that would be radically different from stereotypical images of the overly servile “Uncle Tom” figure (named after the main character in Harriet Beecher Stowe’s iconic 1852 novel) that was familiar to Americans in countless advertisements (like this one, for Ayer’s Cathartic Pills [The Country Doctor], c. 1883) and popular magazines.

In The Banjo Lesson, Tanner’s desire to show us his vision of the resilience, spiritual grace, and creative and intellectual promise of post-Civil War African-Americans is fully realized. The scene is staged within the small confines of a log cabin with the cool glow of a hearth fire casting the scene’s only light source from right corner, enveloping the man and the boy in a rectangular pool of light across the floor. The boy holds the banjo in both hands, his downward gaze a reflection of his focused concentration on his grandfather’s instructions. The older man holds the banjo up gently with his left hand so that the boy is not encumbered by its weight, yet the staging shows us that the man wants the boy to come into the realization of the music and its rewards through his own intuition and hard work. The contrast between the man’s age and the boy’s adds to the narrative tension within in the painting as in the Ghirlandaio, a counterpoint between age and experience, and youth and the promise of achievement. The boy is bathed in the glow of the fire’s warmth with a glimmer of white light shining across his forehead, the center of knowledge and understanding. The older man is submerged in the cool shadows of the room. This carefully orchestrated play of warm and cool, of shadow and light, conveys that the success of future generations is built upon the legacy of previous ones. Bathed in muted cool tones of grays and blues, the grandfather is the past, the old America of slavery and The Civil War, of oppression, racism, and poverty, while the boy, caught in the warm glow of the fire’s light, is the new America, of renewed opportunities, advancement, education, and new beginnings.

Certainly Tanner would have seen a great deal of his own life played out in this tender scene. As the educated son of a former slave and a minister and abolitionist, Tanner was always striving to live up to his potential as an artist in the post-Civil War, post-Reconstruction era America. It is also important that the instrument that leads the boy towards enlightenment is the banjo, an instrument highly significant to African-American slave culture and the music of the American South. The banjo evolved from the gourd instruments of Africa and the West Indies and became integral to the music of enslaved people throughout the eighteenth and nineteenth centuries.

By Tanner’s time, it was a mainstay of minstrel shows, popular variety entertainment that featured white actors in blackface performing songs and skits. In minstrel shows, it was the custom to portray African-Americans as boisterous, jaunty, buffoonish, and dim-witted. This portrayal fed into the preconceived notions of white racial superiority—that African-Americans, even if they were no longer slaves, would still be infantile and incapable of self-determined action or remarkable achievements. The entire visual and popular culture of Uncle Tom imagery and minstrel shows were part of the pernicious psychological chains of slavery that persisted in America throughout much of the nineteenth and twentieth centuries. The shows also depicted African-Americans as having an innate musicality, which acknowledged their talent but undermined their intelligence.

For Tanner, painting this image of generational torch-passing, was a way of debunking the entrenched derogatory stereotypes of African-Americans propagated by minstrel shows. In Tanner’s painting we see the grandfather and the boy as intelligent, noble, graceful people engaged in an intimate act of sharing creative knowledge. Their lesson becomes emblematic of the larger African-American journey of the late nineteenth and early twentieth century, from Emancipation, Reconstruction, the terrors and injustices of the Jim Crow laws, the exodus of the Great Migration, and the foment and dynamism of the Harlem Renaissance. 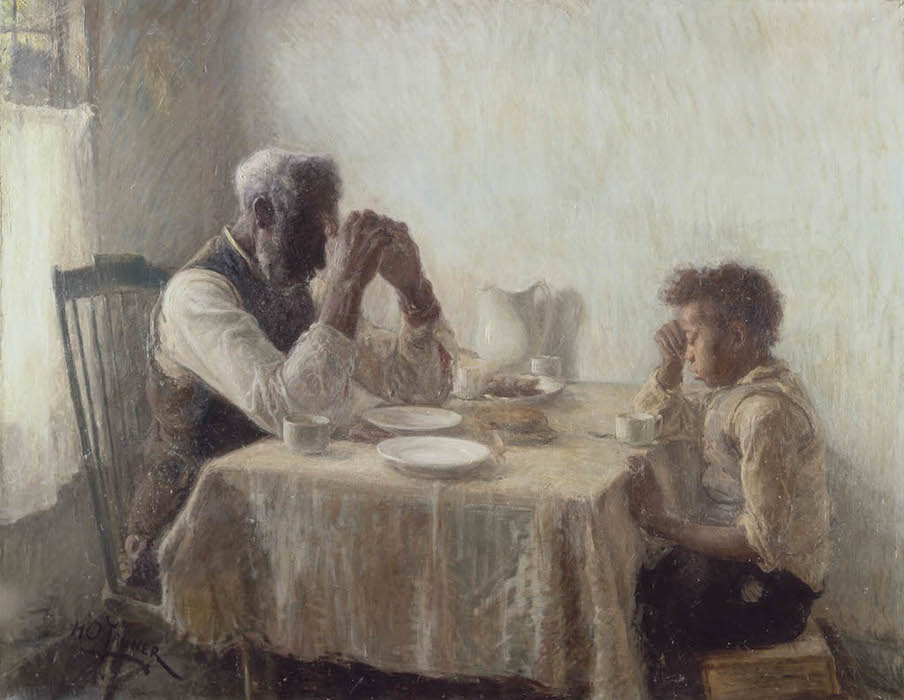 After painting The Banjo Lesson and The Thankful Poor (above), Tanner moved back to Paris where he would remain for most of his life. Tanner felt that France was less encumbered with the baggage of racial prejudice towards people of color than the United States. “In America, I’m Henry Tanner, Negro artist, but in France, I’m ‘Monsieur Tanner, l’artiste américaine.‘”[1] His desire to be recognized by the quality of his talent would inspire him to paint prolifically throughout his life, traveling through the Middle East and North Africa in search of authentic imagery for biblical paintings that would become the hallmark of his later career. When World War I was declared in Europe, Tanner enlisted in the Red Cross, serving as a medical volunteer as well as making numerous sketches and various paintings of the soldiers in France and Belgium. In 1923, he was awarded the Legion of Honour by the French government for his service during the war.

But it is The Banjo Lesson that has become the iconic painting of his entire career. Its economy of scale, its emotional delicacy, its nuanced orchestration of light and shadow and symbolism situates it in a resonant space in American art history. Both The Banjo Lesson and The Thankful Poor were remarkable achievements for Tanner—works that according to the art historian Judith Wilson, “invest their ordinary, underprivileged, Black subjects with a degree of dignity and self-possession that seems extraordinary for the times in which they were painted.”[2] It is a testament to Tanner’s vision as an artist, and his personal convictions as an African-American, amid the possibilities offered by twentieth century, that these two paintings continue to speak so profoundly to us now.