At the time of the Civil War

Today, Eastman Johnson is most well known for the small genre paintings he completed during the middle of the nineteenth century. In several of these images—Old Kentucky Home–Negro Life in the South (1859) is a good example—Johnson focused on the status of race in the United States right about the time of the American Civil War. If this was the first painting he completed that centered attention on the issues of slavery and race in America, then A Ride for Liberty—The Fugitive Slaves is perhaps a just as famous second. 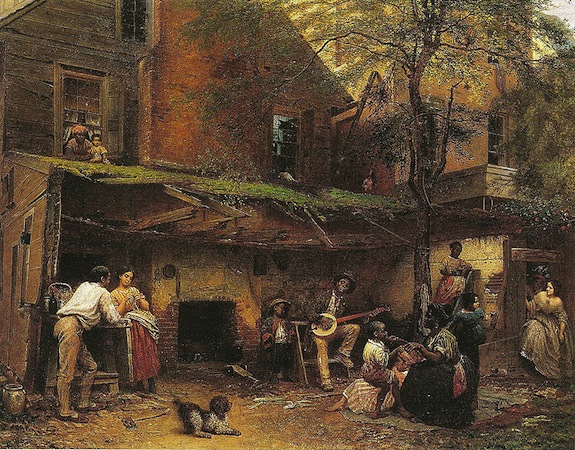 In A Ride for Liberty, Johnson recreates an event commonly seen during the American Civil War, that of slaves crossing battlefields from the Confederate South to the Union North in order to escape the horrors of their bondage. In this painting, Johnson depicts three African Americans—presumably a family consisting of a father, mother, and small child— on horseback. The horse gallops from right to left across the nearly barren battlefield. Each family member looks in a different direction. The father, ahead to the promise of the future, the wife looks back to the hardships of the past, while the child stares downwards at the excitement of the present. 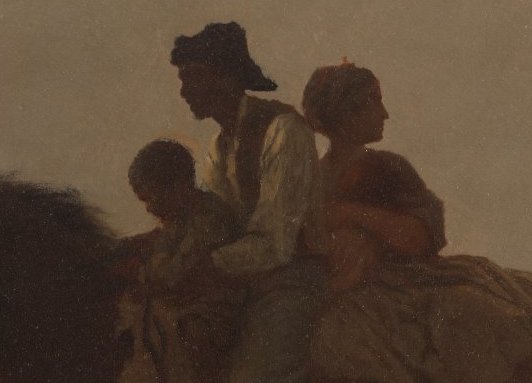 In addition to the directions of their gazes, the placement of the figures on the canvas has importance. Previous artists often depicted African Americans on the edge of the composition as if to marginalize their importance. William Sidney Mount’s The Power of Music (1847) is but one example. In contrast, Johnson chose instead to focus the composition on the African Americans and their dramatic escape to the free North. The sympathetic depiction and the year in which it was painted—1862—strongly speaks to this image being one that visually speaks to the Union causes in the American Civil War, and more specifically to the abolition of slavery. 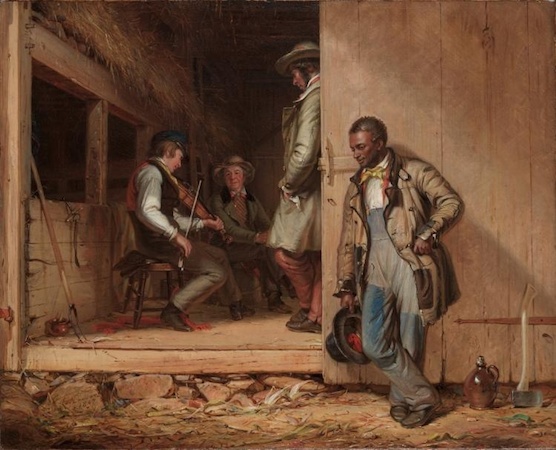 Moreover, Johnson later claimed that this panting was not an artistic flight of fancy, but was instead an accurate rendering of something he saw firsthand. The event he depicted happened on 2 March 1862 on the battlefield in Manassas, Virginia. In the left background, Johnson recreated the Union army, then under the command of General McClellan. As McClellan marched southward, slaves often fled to cross his Union lines and secure their freedom. 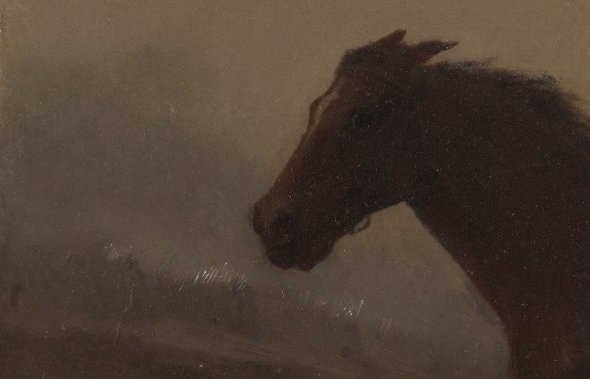 On close examination, further details emerge. During the time period surrounding the Civil War, horses were often characterized by the number of “white socks” they had. It was then believed that the fewer the number of white socks, the greater a horse’s value. Indeed, during the middle of the nineteenth century horse traders believed there was a direct relationship between the amount of white on a horse’s lower limbs and its stamina. Thus, a horse having only one—or more preferably, none at all—white sock would increase its potential value.  When applying this to Johnson’s painting, we can observe that the horse the soon-to-be-free slaves ride has only one white sock, and it is a small one at that. This indicates—for the nineteenth-century viewer, at least—that the horse has been stolen in this noble cause was both valuable and of good breeding.

From Maine to Dusseldorf

Without doubt, Johnson’s life experiences impacted the subjects he aspired to paint. He was born in Lovell, Maine—a free state, of course—and later moved to Washington, D.C., a locale with both free and slave populations. Johnson’s formal artistic education began at the age of sixteen when he was apprenticed with a Boston lithographer. In 1845, Johnson moved to the nation’s capital and began completing portraits, demonstrating nearly equal skill in chalk, crayon, and charcoal. The fact that Johnson could support himself from his art without extensive formal instruction at such an early age is a profound testament to his innate artistic skill.

Since colonial times, artists from North America have traveled abroad in search of artistic instruction. During the 18th century, for example, American artists traveled to London to study in the studio of Benjamin West. John Vanderlyn broke this trend by travelling to Paris and studying at the Ecole des Beaux Arts. During the middle of the nineteenth century, however, artists began to travel further east into the continent in search of innovative artistic instruction. In 1849 Johnson joined other international artists in Germany to study at the Düsseldorf Akademie, an institution that specialized in instruction in genre and landscape painting. During his two-year stay in Germany, Johnson became acquainted with Emanuel Leutze, and both painted small genre paintings. After his tenure at the Düsseldorf Akademie, Johnson continued his international studies at The Hague for three years. His deep admiration and emulation of Dutch painters earned him the nickname of “American Rembrandt.”

However, the subject matter of the Dutch Rembrandt and the American Rembrandt were clearly very different. Indeed, Eastman Johnson’s A Ride for Liberty—The Fugitive Slaves is different from much of the art seen even in antebellum United States. The artistic focus on African Americans during the Civil War was not completely new—Winslow Homer’s art from the early 1860s comes to mind—but Eastman’s sympathetic treatment was relatively rare. Rather than pushing African Americans to the border of the composition, Johnson instead focuses the composition on their plight. In all, this composition forcefully and clearly speaks to the abolition of slavery and the Union cause in the American Civil War. As such, A Ride for Liberty—The Fugitive Slave, maintains a justifiable position in the history of American art.

This painting in the Brooklyn Museum

Eastman Johnson Papers in the Archives of American Art 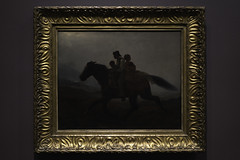