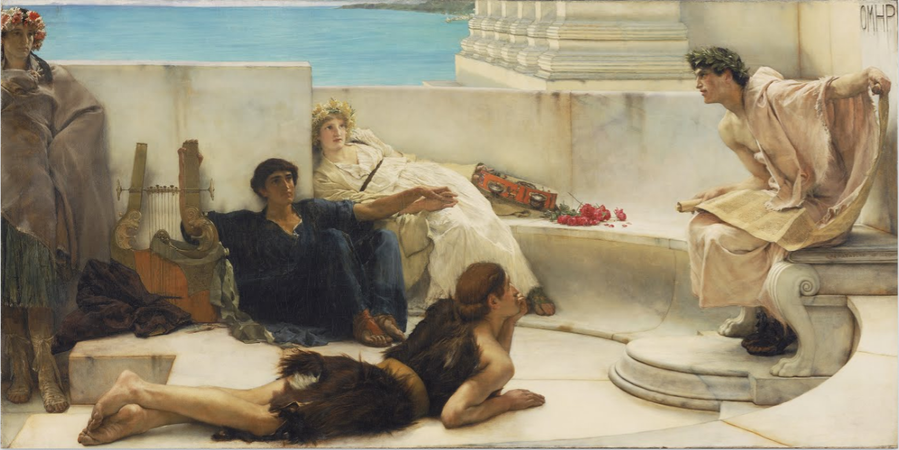 The title is A Reading from Homer. And yet, we see no indications of anyone reading (either to themselves privately or aloud to others). In fact, the storyteller at right, crowned in a wreath of laurel leaves and gesticulating with his left arm, is decidedly looking away from the scroll that unfurls on his lap. Moreover, this painting does not even illustrate a specific scene from Homer’s Iliad or Odyssey.

Despite the title, then, Alma-Tadema’s painting showcases the oral transmission of culture across the ages. Unlike the Victorian (male) elite, who spent long hours studying ancient Latin and Greek texts in pedantic exercises at grammar schools and at university, Alma-Tadema favored a vision of the ancient world that was anything but dry. His paintings were accessible to those outside academia and thus more democratic in their appeal. In A Reading from Homer, the marble bench even seems to curve towards the viewer’s space, as if offering us an invitation to participate in this gathering.

In fact, at the Royal Academy exhibition of 1885, art critic Claude Phillips perceived the populist element of this painting, although he interpreted it negatively. While acknowledging that the painting demonstrates Alma-Tadema’s “usual mastery . . . of light, color, texture, and drawing,” Phillips nonetheless disapproved of the figures themselves: “The facial types, though they have an air of realistic truth, are of a low order, and not such as should have been selected for such a subject.”¹  Here Phillips draws upon the contemporary pseudo-scientific discourse of phrenology and physiognomy, which argued that an individual’s character was legible through the shape of the head and facial features.  For Phillips, the supposedly “low” nature of the figures’ faces was corroborated by their lethargic attitudes, and he preferred paintings with classical themes that elevated the viewer by featuring noble people doing noble deeds. 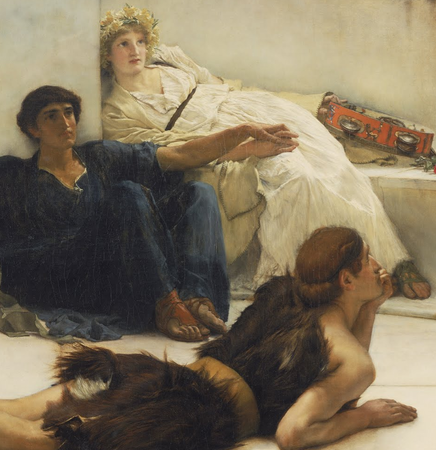 A different kind of Classicism

Alma-Tadema’s vision of antiquity was decidedly different than that. He was a key figure in the mid- to late-Victorian Classical Revival. We can think back to the Neo-classical movement of a century before. A product of the Enlightenment, Neoclassical art favored the cerebral over the sensual and themes that promoted reason, civic virtue, and heroism. Think of Jacques-Louis David’s Oath of the Horatii (1784), which shows three brothers who vow to go to war and sacrifice their lives for Rome. By contrast, in A Reading from Homer, Alma-Tadema shows a group of languorous figures enjoying the sensory delights of a warm Mediterranean day by the sea, withdrawing into private worlds of reverie rather than being urged into collective, public action. 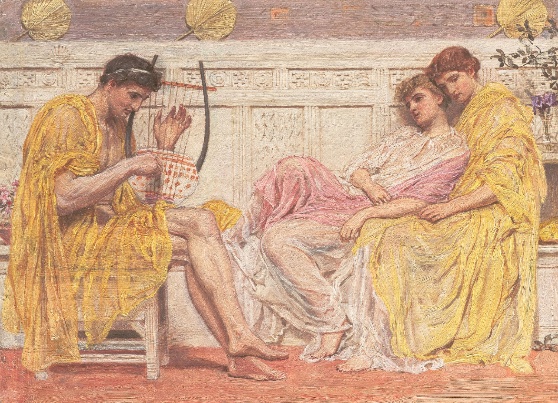 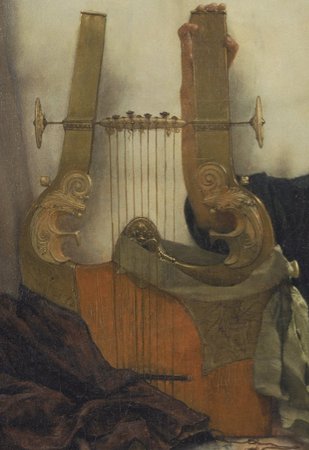 Here Alma-Tadema’s classicism also engages with the mid-Victorian Aesthetic movement (which emphasized the aesthetic qualities of art over the narrative), and A Reading from Homer resembles Albert Moore’s A Musician of c.1867. The lyres in both Moore and Alma-Tadema’s paintings underscore the Aesthetes’ “musical” approach to painting, encouraging the viewer to look at painting in terms of harmonies, rhythms, and contrasts rather than offering any specific narrative moment or moral meaning.  In A Reading from Homer, the viewer can appreciate a series of visual contrasts that offer a pleasing sense of balance and harmony: the angular geometries of the marble architecture at left, which transforms into the sweeping curve of the bench at right; the figures resting in cool shadow against the bright, glowing marble and sun-lit water; the palette of whites, blues, and browns punctuated by the loud accents of the red tambourine and fuschia roses.

Alma-Tadema delighted in the day-to-day materiality of the past. In A Reading from Homer we can see the skill with which he depicted the translucency of the marble, tinged blue by the light from the sky and water; the soft fur tunic worn by the reclining man; and the lyre with all strings carefully delineated.

Alma-Tadema’s attention to artifacts and architecture represents an archaeological approach. The second half of the nineteenth century was a great age of archaeological study and excavation, with discoveries being made in Mediterranean and Near Eastern sites such as Knossos, Mycenae, and even the famed Homeric city of Troy. Alma-Tadema himself regularly visited Pompeii, the Museo Nazionale in Naples, the Vatican Museum, and Rome for archaeological inspiration; at home in London he also had a great resource in the British Museum.

An instance of Commercial Materialism?

Because of Alma-Tadema’s pleasure in depicting the material objects and structures of the past, critics have sometimes been unkind in their view of him. Critic and curator Roger Fry, who helped introduce Post-Impressionism to Britain, denounced Alma-Tadema as representing “an extreme instance of the commercial materialism of our civilization.”²

This view was further cemented by the fact that his art was collected by the wealthy capitalists of his day. A Reading from Homer was purchased by American financier Henry Marquand, then President of the Metropolitan Museum, to go in the music room of his New York mansion. Marquand also commissioned Alma-Tadema to design a suite of furniture for this room, most notably a grand piano made of exotic wood, ivory, and mother-of-pearl. 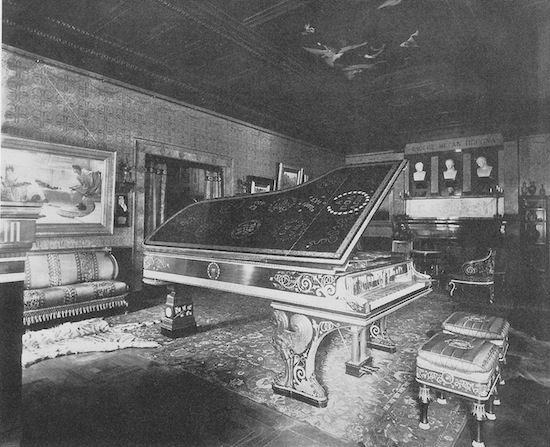 Music Room in the mansion of Henry Marquand

A Reading from Homer offered visitors to Marquand’s home a sort of mirror for their own behavior. Like the figures in the painting, these Gilded Age elite would gather in the music room to listen to a performance or recital. They would also witness Alma-Tadema’s artistic performance by proxy, in the form of this painting. Inscribed on the seat beneath the storyteller is Alma-Tadema’s signature, suggesting the artist’s identification with this figure. Like the Homeric storyteller, Alma-Tadema captivates his audience through his artistic performance, bringing visions of the ancient world to life.

This painting up close in the Google Art Project

Alma-Tadema in the Google Art Project

The Aesthetic Movement from the Victoria and Albert Museum 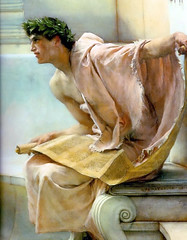