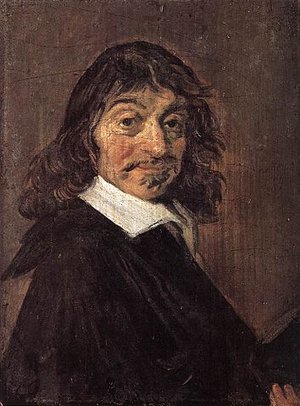 I want to raise Cartesian philosophy here. The word is capitalized because it refers to the philosophy of the proto-Enlightenment thinker René Descartes. Even if you have never heard of this great rationalist, it is likely that you will recognize one of his phrases such as “I think, therefore, I am.” This odd sentence is the result of his effort to find irrefutable proof that he actually existed. Philosophers often ask questions that are meant to reveal fundamental truths. Can you imagine for a moment asking yourself this very question–How can I actually prove that I exist? Descartes realized an elegant solution, his very ability to ask the question was the proof of independent consciousness and therefore, of his existence.

With such questions, Descartes raised many considerations that would shape the modern world. Sometimes these questions raised, in turn, conclusions seemingly at odds with each other, such as his skepticism of both perception and of self-evident assumption.

Ironically, such thoughts would eventually lead to a reappraisal of our confidence in society’s scientific empiricism. Empiricism relies upon objectivity. You will remember that the word “objective” means a truth that is beyond personal experience. In contrast, the word “subjective” is directly linked to personal experience.

Here is an example. Imagine a minor accident between a taxi and a city bus. A patrolman comes along to reconstruct the event. Does he only ask the cab driver what took place or does he also ask the passenger in the back of the cab and the bus driver and the riders on the bus? The cop’s goal is the reconstruct what “actually” happened. But if we take a post-Cartesian position we might ask whether there really was a single actual (objective) event or whether there were actually multiple (subjective) truths, each the result of each witness’s perspective. Let’s take a more directly applicable example. Look about the room that you are currently in. It probably has six sides: four walls, a floor, and a ceiling. When an architect drew a diagram of your room, he/she would have conceptually stepped outside of the space so that it could be understood in total.

But is this objective view a false one? Now in the built room, you cannot see its totality in a single moment. We can only see bits and pieces of the room at any one time and must rely upon memory to understand the room as a whole. Your more subjective experience has historically been considered less important than the architect’s objective conception even though you experience directly and the architect knows the room only theoretically. Regarding the traditional hierarchical relationship between objective and subjective, Cézanne seems to ask, “which is more true?” and his conclusion mirrors an important development of modernism. In Still Life with Plaster Cupid, it is the subjective view that constructs the space. Cézanne has placed a plaster cast (copy) of an ancient Roman sculpture of a cupid (the son of Venus) on a tabletop so that it dominates the composition.

To an artist of the 19th century such classical sculpture would refer to the great humanist triumph of the Greeks and Romans and the birth of naturalism. In fact, one of the most prominent features of such sculpture would be its contrapposto (you remember this: axial shifts responding to weight borne by one leg). Actually, Cézanne’s li’l god-ling is also twisting at the waist, creating a subtle spiral torsion. Again, the space is odd, the floor especially, seems to rise up too steeply with the stacked canvases forming its uneven perimeter. Have you noticed that the canvases that line the floor, shape the space of the room and that this “shaping” is related to the twisting of the cupid? Let do this point by point. The right foot of the sculpture points roughly towards us and aligns, more or less, with the receding orthogonal of the table. The figure’s hips have turned. They are aligned with the plane of the canvas at the extreme left that is partly hidden behind the blue tablecloth. The Cupid’s shoulders are turned even further and align with the canvas that rests behind the godling’s torso. This is clearly not the objective space of the architect. Cézanne has clearly sought to match the perception of space to the movement of the the body. But isn’t that what we really experience? When you walk into a room, do you see the room as an objective whole? No. We can only see a fragment at a time. But as we’ve already established, we don’t actually see in fragments; we see continuously and space is shaped by our continuous movement through it. Try it. Focus on any straight line in the room you are now in. Lean forward, and as you might expect, the angles of the room shift. In Still Life with Plaster Cupid, we see Cézanne’s attempt to render true human vision, vision that is subjective, continuous, and informed by memory.

This painting at the Courtauld Gallery

Brice Marden (video) on Cezanne and his own painting 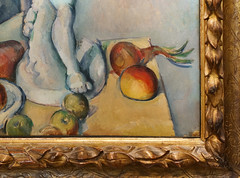