Ford Madox Brown’s great modern life study The Last of England (1852-55) captures a familiar scene in England during the 1850s. A man and woman aboard a crowded ship gaze out at the viewer. A brisk wind blows the woman’s bonnet ties and turns the sea into a mass of white caps, suggesting the potential for a rough passage. The deck behind them is packed with people also making the journey, while green cabbages hanging on the rope railings hint at the long voyage ahead. The predominately somber color scheme, the chilly look of the sea and the sky, and the mournful expressions of the main figures tell the story. The painting is dominated by the two figures, based on the artist and his wife, Emma. Their close proximity and clasped hands identify them as a couple, yet they both stare straight ahead, each locked in their own silent reflections. Barely noticed at first glance is the small hand emerging out of the woman’s cloak, the unseen child that is potentially a nod to the future. The umbrella propped up to shield them from the spray of the sea also blocks their view of the iconic white cliffs of Dover receding in the distance, representing what is left behind. The unusual circular format of the painting acts almost like a telescope, adding a voyeuristic quality to the scene, as if the viewer is spying on this moment of personal grief and introspection. In a catalogue of his paintings written in 1865, Brown described The Last of England as “the parting scene in its fullest tragic development.” He also alludes to the superior class status of the couple compared to most of those in the background as “a couple from the middle class, high enough, through education and refinement, to appreciate all they are now giving up.” Inspiration for the painting came from the departure of the sculptor Thomas Woolner, an original member of the Pre-Raphaelite Brotherhood, who joined the exodus to dig for gold in Australia in 1852. This came during a period of massive emigration from Britain—between circa 1815 and 1914 approximately ten million people sailed away, primarily to the U.S., Canada, Australia, and New Zealand, hoping to improve their personal prospects. Unlike Woolner, who returned (without gold) to England in 1854, many of these people never saw their homeland again. Nor were they expected to return, which explains the couple’s mournful expressions. Other painters of the day addressed the subject of emigration, most notably Richard Redgrave in his The Emigrant’s Last Sight of Home (1858). However, Redgrave’s depiction of a family leaving a small village to begin their long journey is far more optimistic. In Redgrave’s work, the sunny sky, vivid green landscape, and the father’s theatrical wave of his hat as a final gesture of farewell create a feeling of hope largely missing from Brown’s painting. Brown worked on this image over a period of years. Painted for the most part in his backyard, the artist worked on cold days using his family and local people as models. For example, when the painting was nearing completion, he recorded in his diary “it was the weather for my picture & made my hand look blue with the cold as I require in the work, so I painted all day out in the garden.” The minute detail of the purplish flesh on the exposed hands of the man in the foreground attests to Brown’s attention to detail. The glowering expression on the man’s face may also relate to Brown’s own emotions, as at the time he was struggling to achieve commercial success and himself entertained the idea of emigration. The Last of England is a poignant reminder of the journey made by millions of people during the 19th century. At a time when many people are interested in genealogy and learning where they came from, it is a visual reminder of the hope and despair that these emigrants must have felt as they left their homes and families behind in search of a better life.

A watercolor version of The Last of England at the Tate 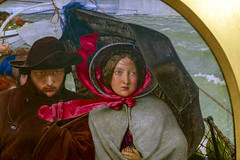