When it appeared at the Royal Academy annual exhibition of 1850 Christ in the House of his Parents must have seemed a serious departure from standard religious imagery. Painted by the young John Everett Millais, a member of the Pre-Raphaelite Brotherhood (P.R.B.), Christ in the House of his Parents focuses on the ideal of truth to nature that was to become the hallmark of the Brotherhood. 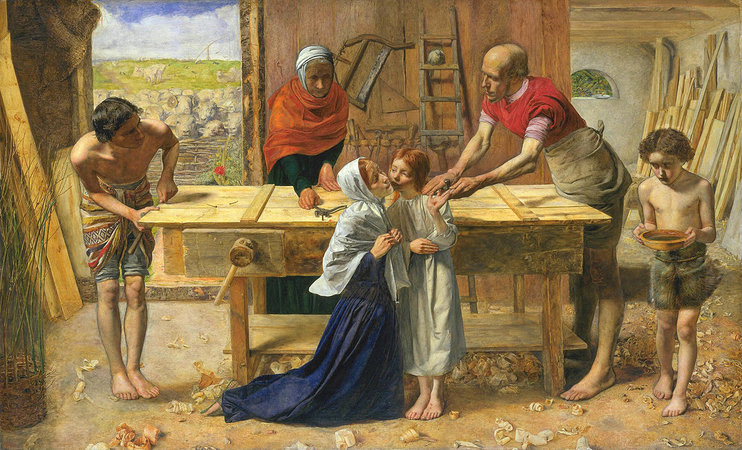 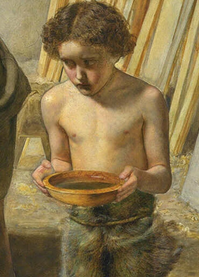 The picture centers on the young Christ whose hand has been injured, being cared for by the Virgin, his mother. Christ’s wound, a perforation in his palm, foreshadows his ultimate end on the cross. A young St. John the Baptist carefully brings a bowl of water to clean the wound, symbolic of Christ washing the feet of his disciples.  Joseph, St Anne (the Virgin’s mother) and a carpenter’s assistant also react to Christ’s accident. At a time when most religious paintings of the Holy Family were calm and tranquil groupings, this active event in the young life of the Savior must have seemed extremely radical. 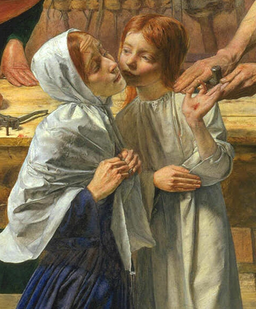 The same can be said for Millais’ handling of the figures and the setting in the painting. Mary’s wrinkled brow and the less than clean feet of some of the figures are certainly not idealized. According to the principles of the P.R.B., the attention to detail is incredible. Each individual wood shaving on the floor is exquisitely painted, and the rough-hewn table is more functional than beautiful. The tools of the carpenters trade are evident hanging on the wall behind, while stacks of wood line the walls. The setting is a place of work, not a sacred spot.

Painted in a carpenter’s shop 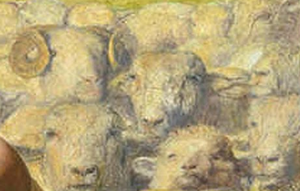 William Michael Rossetti recorded in The P.R.B. Journal that Millais started to work on the subject in November 1849 and began the actual painting at the end of December. We know from Rossetti and the reminiscences of fellow Brotherhood member William Holman Hunt that Millais worked on location in a carpenter’s shop on Oxford Street, catching cold while working there in January. Millais’ son tells us that his father purchased sheep heads from a butcher to use as models for the sheep in the upper left of the canvas. He did not show the finished canvas to his friends until April of 1850.

Although Millais’ exhibit at the Royal Academy in 1849, Isabella, had been well received, the critics blasted Christ in the House of his Parents. The most infamous review, however, was the one by Charles Dickens that appeared in his magazine Household Words in June 1850. In it he described Christ as:

a hideous, wry-necked, blubbering, red-haired boy in a nightgown, who appears to have received a poke playing in an adjacent gutter, and to be holding it up for the contemplation of a kneeling woman, so horrible in her ugliness that (supposing it were possible for any human creature to exist for a moment with that dislocated throat) she would stand out from the rest of the company as a monster in the vilest cabaret in France or in the lowest gin-shop in England.

The commentary in The Times was equally unfavorable, stating that Millais’ “attempt to associate the Holy Family with the meanest details of a carpenter’s shop, with no conceivable omission of misery, of dirt, of even disease, all finished with loathsome minuteness, is disgusting.” The painting proved to be so controversial that Queen Victoria asked that it be removed from the exhibition and brought to her so she could examine it.

At the Royal Academy

The attacks on Millais’ painting were undoubtedly unsettling for the young artist. Millais had been born in 1829 on the island of Jersey, but his parents eventually moved to London to benefit their son’s artistic education. When Millais began at the Royal Academy school in 1840 he had the distinction of being the youngest person ever to have been admitted.

At the Royal Academy, Millais became friendly with the young William Holman Hunt, who in turn introduced Millais to Dante Gabriel Rossetti, and the idea for the Pre-Raphaelite Brotherhood was born. The young artists exhibited their first set of paintings in 1849, all of which were well received, but the paintings shown in 1850 were universally criticized, although none with as much fervor as Christ in the House of his Parents. 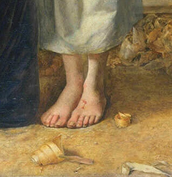 Millais’ Christ in the House of his Parents is a remarkable religious painting for its time. It presents the Holy Family in a realistic manner, emphasizing the small details that bring the tableau to life. It is a scene we can easily imagine happening, but it is still laced with the symbolism expected of a Christian subject. It is Millais’ marriage of these two ideas that makes Christ in the House of his Parents such a compelling image, and at the same time, made it so reprehensible to Millais’ contemporaries.

Millais on The Victorian Web