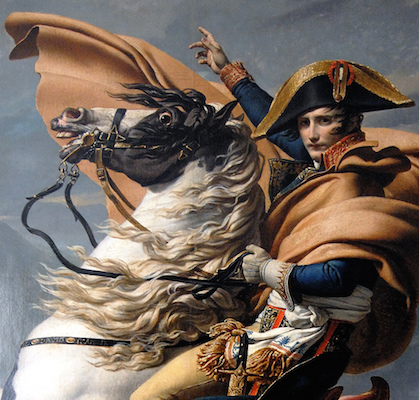 Few world leaders have had a better understanding of the ways in which visual art can do political work on their behalf than did Napoleon Bonaparte. From the time he ascended to power during the French Revolution until his ultimate removal from office in 1815, Napoleon utilized art (and artists) to speak to his political (and sometimes his military) might. One of the best-known images that serves this exact end is Jean-Auguste-Dominique Ingres’s 1806 painting Napoleon on His Imperial Throne. In this painting, Ingres shows Napoleon not only as a emperor of the French, but almost as if he were a divine ruler.

Shortly after the turn of the nineteenth century, Ingres was one of the rising stars and fresh voices of the French neoclassical movement, an artistic style that was in part founded by Ingres’s prestigious teacher, Jacques-Louis David. By 1806, David had painted Napoleon many times. Two of the most famous of these works are Napoleon Crossing the Alps (1801) and The Coronation of Napoleon (1805–1807), the latter, a painting that is contemporary with Ingres’s portrait. In both of these images, David went out of his way to glorify his patron. This too was one of Ingres’s primary goals, and the portraitist utilized furniture, attire, and setting to transform Napoleon from mere mortal to powerful god. Napoleon sits on an imposing, round-backed and gilded throne, one that is similar to those that God sits upon in Jan van Eyck’s Flemish masterwork, the Ghent Altarpiece (1430-32) (comparison above). Its worth noting that, as a result of the Napoleonic Wars, the central panels of the Ghent Altarpiece that include the image of God upon a throne, were in the Musée Napoléon (now the Louvre) when Ingres painted this portrait. The armrests in Ingres’s portrait are made from pilasters that are topped with carved imperial eagles and highly polished ivory spheres (left).

A similarly spread-winged imperial eagle appears on the rug in the foreground. Two cartouches can be seen on the left-hand side of the rug (below). The uppermost is the scales of justice (some have interpreted this as a symbol for the zodiac sign for Libra), and the second is a representation of Raphael’s Madonna della Seggiola (1513-14), an artist and painting Ingres particularly admired. 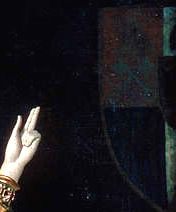 One final ancillary element should be mentioned. On the back wall over Napoleon’s left shoulder is a partially visible heraldic shield. The iconography for this crest, however, is not that of France, but is instead Italy and the Papal States. This visually ties the Emperor of the French to his position—since 1805—as the King of Italy.

It is not only the throne that speaks to rulership. He unblinkingly faces the viewer. In addition, Napoleon is bedazzled in attire and accouterments of his authority. He wears a gilded laurel wreath on his head, a sign of rule (and more broadly, victory) since classical times. In his left hand Napoleon supports a rod topped with the hand of justice, while with his right hand he grasps the scepter of Charlemagne. Indeed, Charlemagne was one of the rulers Napoleon most sought to emulate (one may recall that Charlemagne’s name was incised on a rock in David’s earlier Napoleon Crossing the Alps). An extravagant medal from the Légion d’honneur (like the one below, right) hangs from the Emperor’s shoulders by an intricate gold and jewel-encrusted chain. 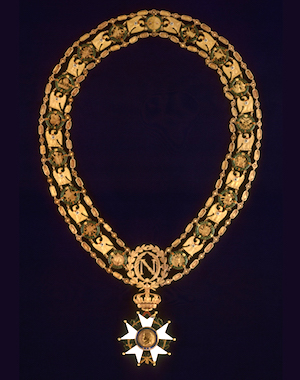 Necklace of the Grand Master of the Order of the Legion of Honor, owned by Napoleon I (Musée de l’Armée)

Although not immediately visible, a jewel-encrusted coronation sword hangs from his left hip (image below). The reason why the sword—one of the most recognizable symbols of rulership—can hardly be seen is because of the extravagant nature of Napoleon’s coronation robes. An immense ermine collar is under Napoleon’s Légion d’honneur medal. Ermine—a kind of short-tailed weasel—have been used for ceremonial attire for centuries and are notable for their white winter coats that are accented with a black tip on their tail. Thus, each black tip on Napoleon’s garments represents a separate animal. Clearly, then, Napoleon’s ermine collar—and the ermine lining under his gold-embroidered purple velvet robes—has been made with dozens of pelts, a certain sign of opulence. The purple color of the garment was a deliberate choice, and has a long tradition as a hue restricted for imperial use. Indeed, Roman emperors had exclusive right to wear purple, and it was through this tradition that Jesus also came to wear violet robes. All these elements—throne, scepters, sword, wreath, ermine, purple, and velvet—speak to Napoleon’s position as Emperor. 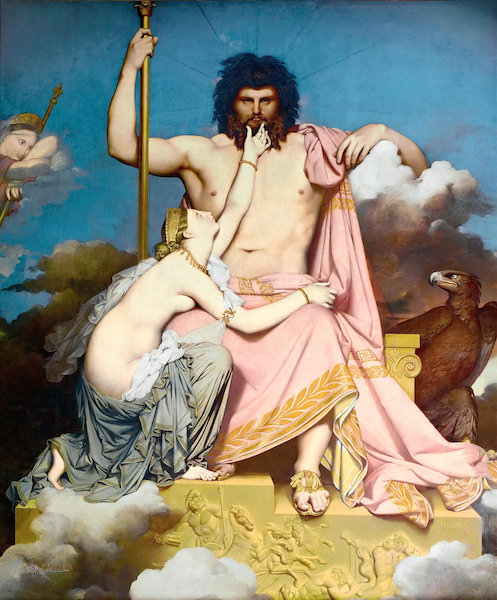 But it is not only what Napoleon wears. It is also how the emperor sits. In painting this portrait, Ingres borrowed from other well-known images of powerful male figures. Perhaps the most notable was a long-since-destroyed but still well known image of Zeus (the ancient Greek God, king of the gods of Mount Olympus) that Phidias, one of the most famous of Greek sculptors, made around 435 B.C.E. This ‘type’ showed Zeus seated, frontal, and with one arm raised while the other was more at rest. Indeed, this is the posture Jupiter takes in a slightly later Ingres painting, Jupiter and Thetis (1811). Thus, Ingres is working in yet another rich visual tradition, and in doing so, seems to remove Napoleon Bonaparte from the ranks of the mortals of the earth and transforms him into a Greek or Roman god of Mt. Olympus. Never once accused of modesty, there is no doubt that Napoleon approved of such a comparison.

Looking at Ingres’s Napoleon on His Imperial Throne is a visually overwhelming experience. Its colossal size (it measures 8’6” x 5’4”) and neoclassical precision eloquently speak to Napoleon’s political authority and military power. The low eye level—about that of Napoleon’s knees—also indicates that the viewer is looking up at the seated ruler, as if kneeling before him. The sum total of this painting is not just the coronation of Napoleon, but almost his divine apotheosis. Ingres shows him not just as a ruler, but as omnipotent immortal.

This painting at the Musée de l’Armée, Paris
The Legacy of Jacques Louis David on The Metropolitan Museum of Art’s Heilbrunn Timeline of Art History
Ingres, Napoleon on His Imperial Throne from learner.org 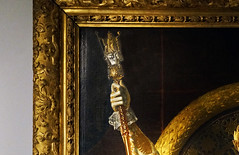 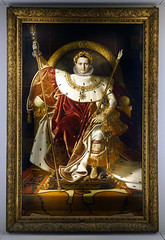 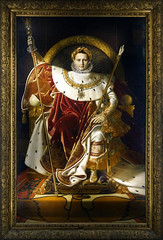