Just one bite. Surely that can’t hurt. Or can it? It took less than one bite to destroy the mythological goddess Proserpine’s life. This tragic maiden was gathering flowers when she was abducted by Pluto, carried off to his underground palace in Hades – the land of the dead, and forced to marry him. Distraught, her mother Ceres pleaded for her return. The god Jupiter agreed, on condition that Proserpine had not tasted any of the fruits of Hades. But she had—a single pomegranate seed—and as punishment she was destined to remain captive for six months of each year for the rest of her life in her bleak underground prison.

The English painter and poet Dante Gabriel Rossetti produced at least eight paintings of Proserpine trapped in her subterranean world, the fatal pomegranate in her hand. He also wrote a sonnet to accompany the painting, which is inscribed in Italian on the painting itself and in English on the frame, cited below. This is the seventh version of the painting. It was produced for the wealthy ship-owner and art collector Frederick Leyland from Liverpool and is now in the Tate collection, London. The original idea was to paint Eve holding the forbidden apple, a scene from Genesis; and in fact the two stories are almost directly comparable. Eve and Proserpine both represent females banished for their sin of tasting a forbidden fruit. Their yielding to temptation has often been seen as a sign of feminine weakness or lack of restraint. 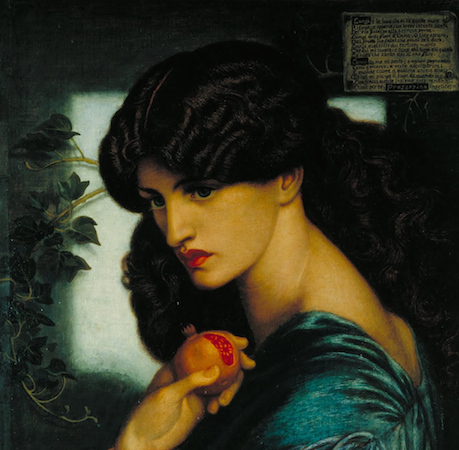 At first glance the painting appears still, subdued—muted like the colour scheme. Proserpine is motionless, absorbed in thought, and the only sign of movement is the wisp of smoke furling from the incense burner, the attribute of the goddess. But look closely, and the painting appears to bristle with a tortuous, pent-up energy. It is full of peculiar twists and turns. Take Proserpine’s neck: it bulges unnaturally at the back, and looks as though it is slowly being screwed or twisted like rubber. Her hands too are set in an awkward grip. Try mimicking this yourself—it is difficult to hold this pose for long. This is a painting of almost tortured stillness: a body under strain.

This underlying unease is also apparent in the lines and creases of Proserpine’s dress. Notice how it does not form natural-looking folds. Instead it looks like the fabric is covered in clinging, creeping ridges that seem to slowly wind their way around the goddess, ensnaring and rooting her to the spot. These ridges could be compared to the tendril of ivy in the background, which appears to sprout directly from her head. Ivy is a plant with dark connotations—an invasive vine, it has a tendency to grip, cover and choke other plant-life. It is often associated with death, and is a common feature in graveyards. Rossetti wrote that the ivy in this painting symbolises ‘clinging memory.’  But what are these memories that cling so tightly?

As many have pointed out, this painting of Proserpine strikes a chord with Rossetti’s personal life. The writer Theodore Watts-Dunton, Rossetti’s close friend, wrote that “the public… Has determined to find in all Rossetti’s work the traces of a morbid melancholy… Because Proserpine’s expression is sad, it is assumed that the artist must have been suffering from a painful degree of mental depression while producing it.” Rossetti had, in fact, suffered a nervous breakdown just two years before he produced this painting. He suffered from acute paranoia, and was becoming increasingly reliant on alcohol and chloral for relief. There are doubtless many reasons for this, one of which was the death—or perhaps suicide—of his wife Lizzie Siddal in 1862, of a laudanum overdose. Rossetti and Lizzie’s relationship had been fraught and unstable. He was haunted by memories of her for the rest of his life. 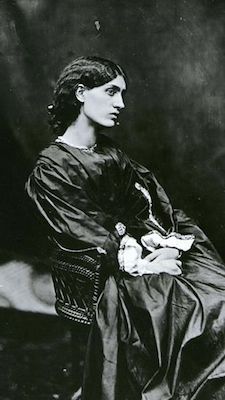 But the plot thickens. When he painted Proserpine, Rossetti was entangled in a complicated love triangle. He was completely infatuated with the model for this painting, Jane Morris, easily recognizable by her thick raven hair, striking features and slender, elongated figure—though here they have been molded into the typical Rossettian type. Rossetti called her a “stunner.” The problem was that this stunner happened to be the wife of his good friend William Morris. When this was painted, the three were living together at Kelmscott Manor (Oxfordshire). Morris appeared either to tolerate or ignore the intimacy that cleaved Rossetti and his beloved Jane together. Many have noted the similarity between Proserpine and Jane’s personal predicaments: both were young women trapped in unhappy marriages, longing for freedom. But perhaps it is also a meditation on Rossetti’s own situation. Unable to contain his feelings for Jane, he had given in to temptation and for this was destined to live part of his life in secrecy and withdrawal. Rossetti himself had tasted the fatal fruit and was living with the consequences.

The problematic pleasures of taste 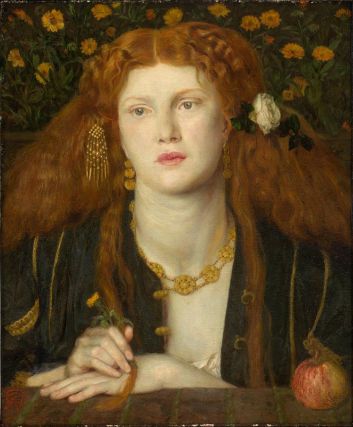 In this painting, a clear correspondence is set up between Proserpine’s improbably large lips and the pomegranate in her hand. While the rest of the painting has been completed in cool, sometimes murky colors—Rossetti called it a “study of greys” —the lips and pomegranate are vivid and intense, painted in warm orange and red tones. It is significant that these features—the mouth and the fruit—have strong associations with the pleasures of taste. It is as though Rossetti is presenting both as objects ripe for consumption, tempting the viewer to take a taste. This is not as improbable as it first sounds: one of Rossetti’s earlier paintings, Bocca Baciata (left), which also shows a single female figure with a fruit (an apple in this case) was considered capable of stirring an erotic, physical response in viewers. The artist Arthur Hughes, a contemporary of Rossetti’s, said that the owner of this painting would probably try to ‘kiss the dear thing’s lips away.’ In fact, the title of the painting itself translates as “the mouth that has been kissed.”

This sensual, carnal side of Rossetti’s work caused controversy during his lifetime—for a Victorian artist, he was venturing into dangerous territory. Even today some find his sexualized vision of feminine beauty difficult to stomach. Rossetti argued however that work was not just a study of the sensual in life. He insisted that his art was an attempt to synthesize the sensual and the spiritual. His fried Theodore Watts-Dunton defended this in an article “The Truth about Rossetti.” To Rossetti he wrote, “the human body, like everything in nature, was rich in symbol… To him the mouth really represented the sensuous part of the face no less certainly than the eyes represented the spiritualized part.” adding that if the lips of Rossetti’s women appear overly full and sensual, this is always counter-balanced by the spiritual depth invested in their eyes.  It is true that in this painting there does appear to be a haunting melancholy in Proserpine’s eyes, but whether Rossetti fully achieves this synthesis of the sensual with the spiritual is still up for debate.

Afar away the light that brings cold cheer
Unto this wall, – one instant and no more
Admitted at my distant palace-door.
Afar the flowers of Enna from this drear
Dire fruit, which, tasted once, must thrall me here.
Afar those skies from this Tartarean grey
That chills me: and afar, how far away,
The nights that shall be from the days that were.
Afar from mine own self I seem, and wing
Strange ways in thought, and listen for a sign:
And still some heart unto some soul doth pine,
(Whose sounds mine inner sense is fain to bring,
Continually together murmuring,) –
“Woe’s me for thee, unhappy Proserpine!”

Another painting on this subject at the Birmingham Museums & Art Gallery

This painting and subject on the Victorian Web

Proserpine on the Rossetti Archive