Monet’s painting, The Gare Saint-Lazare, overwhelms the viewer not though its scale (a modest 29 ½ by 41 inches), but through the deep sea of steam and smoke that envelops the canvas. Indeed, as one contemporary reviewer remarked somewhat sarcastically, “Unfortunately thick smoke escaping from the canvas prevented our seeing the six paintings dedicated to this study.”[1] 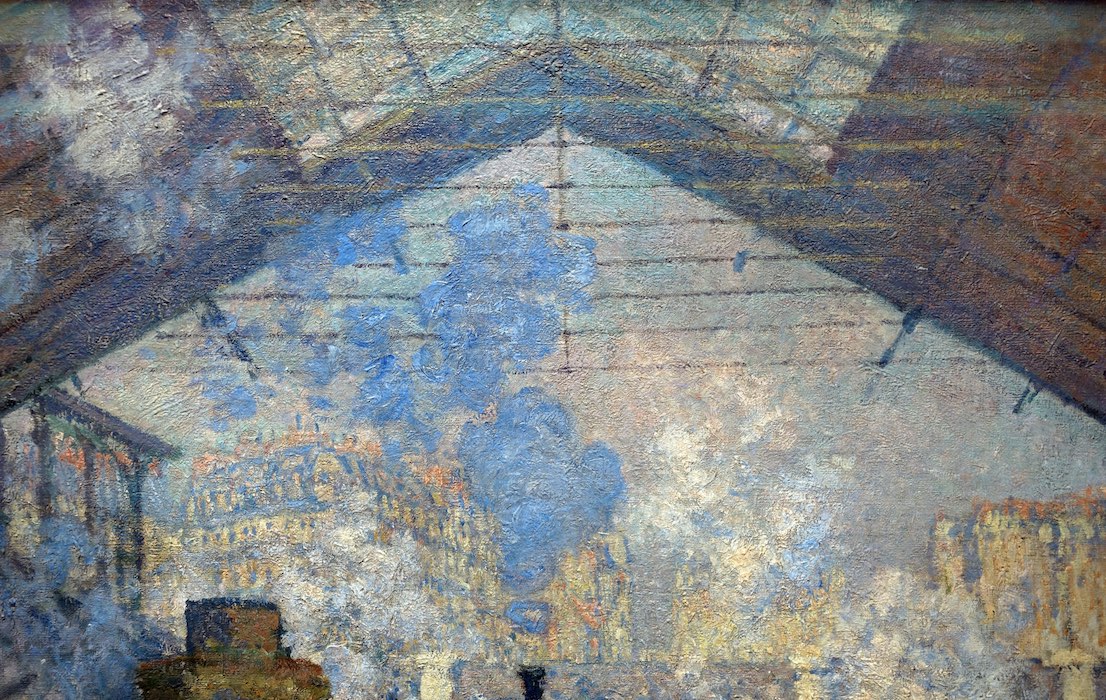 Monet’s achievement is extraordinary, and The Gare Saint-Lazare, the Auteuil Line has rightfully been singled out as among the most impressive paintings of Impressionism. Monet renders the steam with a range of blues, pinks, violets, tans, grays, whites, blacks, and yellows. He depicts not just the steam and light—which fill the canvas—but also their effect on the site—the large distant apartments, the Pont de l’Europe (a bridge that overlooked the train station), and the many locomotives—all of which peak through, and dematerialize into a thick industrial haze.

Train and shed as subject

Against the bright background, Monet represents the station’s vast iron roof in copper and tan tones that stand out against The Gare Saint-Lazare, the Auteuil Line’s low key palette, with its swirling blue, gray and purple background. The trains—here represented by no less than three locomotives and a large box car—are shown as both the source of the steam and distinct from it. However, in 1877, a number of critics were worried the smoke would completely engulf them. Gorges Maillard, writing in the conservative journal Le Pays, made just this point, describing the paintings as “the rails, lanterns, switchers, wagons, above all, always these flakes, these mists, clouds of white steam, are so thick they sometimes hide everything else.”[2] 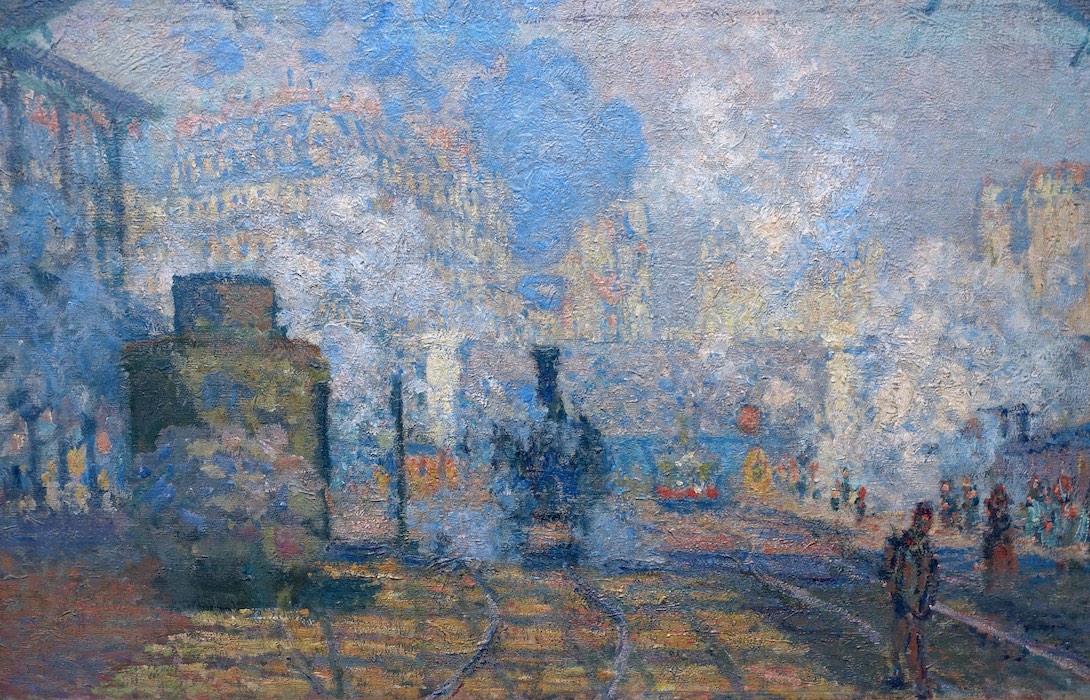 The Gare Saint-Lazare, the Auteuil Line and the other paintings of the Gare Saint-Lazare by Monet are hardly an isolated moment in the artist’s oeuvre. In the 1870s Monet—along with most of the other major Impressionists including, Caillebotte, Pissarro, Renoir, Degas, Guillaumin, Raffaëlli, and even Manet—had shown a steady interest in the railroad as a subject within their paintings of modern of life. In fact, the six to eight paintings Monet exhibited at the Third Impressionist Exhibition were shown along with Caillebotte’s monumental Le Pont de l’Europe (below) that likewise shows the train yards of the Gare Saint-Lazare. Caillebotte’s painting though shows the site from the great iron bridge that crossed over the yards—the Pont de l’Europe. Interestingly, Caillebotte’s painting of genteel strollers set in the bourgeois world of Paris’s grand boulevards drew praise, while Monet’s paintings of trains, steam and industrial activity were severely criticized. Perhaps the criticism is due to the fact that Monet shows the locomotives as the main subject, rather than as background elements. He shows them unapologetically, in their natural element, among the steam, workers and activity of the bustling train station. Four paintings in the set of twelve, including The Gare Saint-Lazare, the Auteuil Line, show the large and distinctive cast iron spans that covered the platforms. However, the other paintings show the exterior, the yards, workers, tunnels, switches, sheds, and engines of the station. Indeed, even in The Gare Saint-Lazare, the Auteuil Line and the other so-called interiors of the of the train shed, Monet includes workers, steam, and industrial machines. In fact, what he does not show is the grand hotel, lavish entrance or sculpture of the station’s impressive façade. Even in the interiors, the paintings are very much the business end of the station.

These common subjects—train, steam, and industrial activity—raise the question of whether the works should be regarded as series. Though scholars have frequently discussed the works, and particularly the four interiors, as part of series, only two of the works show a repeated (or serial) view. When taken as a whole the group does not seem to be the manifestation of an interest in serial painting or an exploration of subtle changes only evident in repeated views (as Monet will later do with his series of grain stacks) bur rather as an effort to capture the varied aspects of the station by rendering its many faces in paint.

This painting at the Musée d’Orsay

Monet, Gare St. Lazare at the Art Institute of Chicago 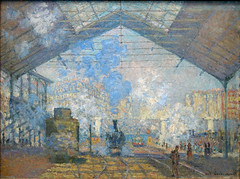 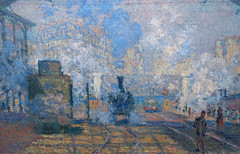 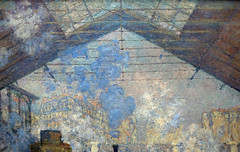 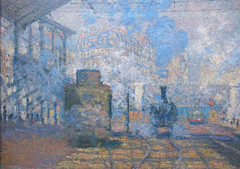