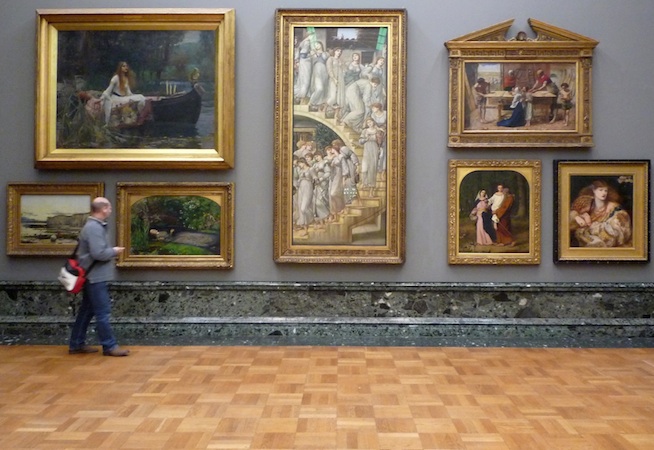 A seemingly endless stream of young women descending a spiral staircase is the subject of Sir Edward Burne-Jones painting The Golden Stairs. The passive beauty of their faces is typical of the artist, and a quality that can also be found in many of the paintings of his early mentor Dante Gabriel Rossetti. Clothed in vaguely Renaissance costumes, the women are painted in a monochromatic palette designed to create a sense of mood and timelessness. One of the artist’s first attempts at working on such a large scale, the very vertical structure of the canvas draws the viewer’s eye downward through the long parade of nearly identical women.

A painting that has no specific subject matter, The Golden Stairs, shows the growing influence of the Aesthetic Movement, a style that demanded beauty, but not a direct link to a source. Instead it is the aesthetic quality of the picture and the mood it created that are important. F.G. Stephens commented in The Athenaeum (May 8, 1880) that the women move “like spirits in an enchanted dream, each moving gracefully, freely, and in unison with her neighbors.”

More frequently commented on is the association between the painting and music. Many of the women hold musical instruments, and several of the titles initially proposed by Burne-Jones for the painting were musically related. The power of music to evoke a mood without a particular story is something celebrated by many in the Aesthetic Movement, such as the painter James Whistler. In the words of the Aesthetic critic Walter Pater in his Renaissance (1873) “all art constantly aspires towards the condition of music.”

Burne-Jones and the Pre-Raphaelites 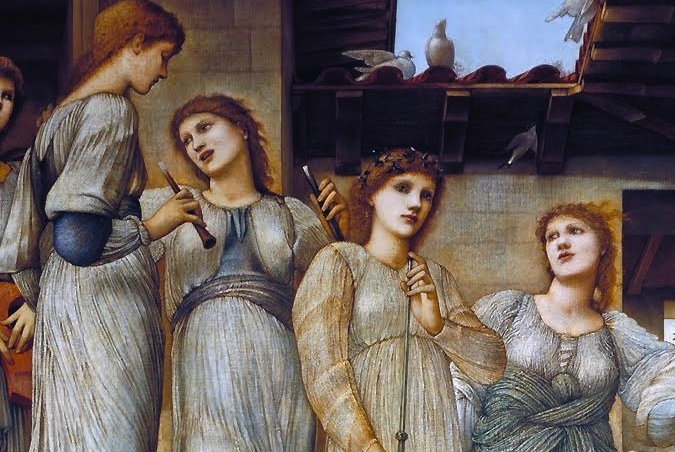 Born in Birmingham in 1833, Burne-Jones went to Exeter College, Oxford in 1853, intending to enter the church. At Oxford he met William Morris, and the writings of Ruskin and the paintings of the Pre-Raphaelites inspired the pair. They both decided to devote themselves to art, eventually meeting Rossetti and working with him on a scheme to paint murals in the Oxford Union on the subject of King Arthur. Burne-Jones and others helped Morris to found Morris, Marshall, Faulkner and Co. in 1861, for which Burne-Jones provided designs for stained glass, tapestries and other decorative elements. From the 1860s onward, Burne-Jones began to develop his distinctive style of painting, a fusion of the Pre-Raphaelite style with the developing Aesthetic Movement.

A new way of exhibiting art 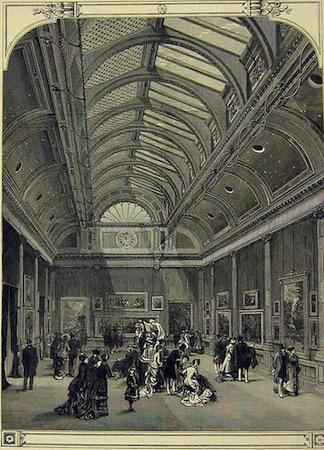 The Grosvenor Gallery of Fine Art, May 5 1877, engraving, from the Illustrated London News

Burne-Jones was one of the first artists to exhibit at the Grosvenor Gallery, contributing 8 paintings to the opening exhibition in 1877. The vision of Sir Coutts Lindsay and his wife Blanche, the Grosvenor Gallery was an alternative to the Royal Academy, and many of the more avant-garde artists of the day exhibited there.

One of the innovations of the Grosvenor was a new style of hanging the works of art. Instead of a floor to ceiling riot of art with frames virtually touching as was seen at the Royal Academy, the Grosvenor hung each painting with space around it, allowing the viewer space to contemplate each individual work of art.

Paintings such as The Golden Stairs firmly established Burne-Jones’ image of the slender, pale, and vaguely wistful young woman as the aesthetic standard of beauty. So popular was this picture that apparently one of Burne-Jones’ patrons suggested to W.S. Gilbert that he base an opera on The Golden Stairs. In April 1881 Patience by Gilbert and Sullivan, a comic operetta satirizing the Aesthetic Movement, opened in London. The curtain rises to reveal a stage full of young women in aesthetic dress playing musical instruments and singing, much like the women in the painting. In The Golden Stairs, Burne-Jones captured an image that resonated with the Victorians, but his evocation of mood and vision of beauty are timeless.

Burne-Jones in the Google Art Project

How paintings were exhibited at the Royal Academy 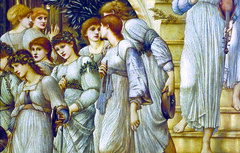 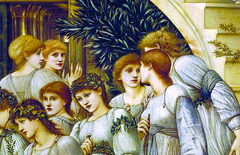 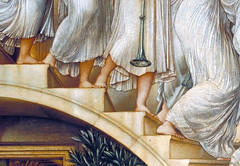 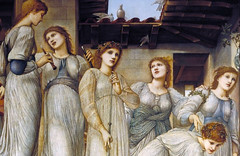