The massive canvas of Courbet’s A Burial at Ornans still surprises viewers in the Musée d’Orsay in Paris. A little over ten feet high and twenty feet across, we confront a line of over forty life-sized figures mostly dressed in black. It is a funeral, and the grave itself—a painted hole in the ground at the bottom of the canvas—lies at our feet. It is as if we have just stumbled upon these people on our way through the galleries. The Parisian public who attended the annual exhibitions expected to see paintings that affirmed their taste and were morally uplifting, like Thomas Couture’s enormous The Romans of the Decadence, a moralizing painting of ancient Romans luxuriating on epic scale. Images of peasants were also acceptable if they were small and in the style of the quiet laborers of Jean-François Millet’s The Gleaners. No, instead of these, Gustave Courbet shows us the middle-class citizens of a provincial town standing around a grave at a funeral. In A Burial at Ornans , Courbet defies expectations—there is no transcendence, no moment of grief and beauty as we envision the soul of the departed ascending to the heavens. Instead, we have a box (the coffin) borne by the pall-bearers on the left-hand side of the canvas with a crucifix carried beside them. A priest utters blessings over the grave, as a dog and two men in breeches stand nearby, and the mourners look about themselves while paying little attention to his words. In the background, the chalky cliffs of Franche-Comté (a region in eastern France) frame the scene with a grey sky overhead. The painter, Gustave Courbet, has shown a funeral as it really was; after all, he was the man who later said that painting “can only consist in the representation of real and existing things.”[1]

In 1849, Gustave Courbet had left Paris and went home to the provincial town of Ornans, as he did every summer. This time was a little different because his maternal grandfather (a veteran of the French Revolution), had recently died. In his grandfather’s house that summer, Courbet set up a studio and began his first major work, A Burial at Ornans, painting his family and neighbors, and challenging everything about French artistic tradition. Peter Paul Rubens, view in the Louvre of three paintings from the 24-picture cycle Rubens painted for the Medici Gallery in the Luxembourg Palace, in Paris, 1621–25. From left to right: The Presentation of the Portrait of Marie de’ Medici, The Wedding by Proxy of Marie de’ Medici to King Henry IV, Arrival (or Disembarkation) of Marie de Medici at Marseilles. Before A Burial at Ornans, paintings on this scale typically depicted the great and the divine. Courbet could have seen many such history paintings, such as Peter Paul Rubens’s Medici Cycle in the Louvre Museum, and he knew the rules of French art. History painting (the most noble form of art, according to this reasoning) had to show queens, gods, saints, and heroes, and these paintings never showed everyday people as the subject. Courbet did something entirely new, acknowledging the dignity of everyday citizens by depicting them on the scale (20 feet wide!) previously reserved for those who held power. When he submitted his painting of common people from the French provinces to the Paris Salon, he expected controversy.

What did he have to lose? He was thirty years old and had not yet achieved the success he craved. Up until then, most of his work had been a series of portraits and self-portraits in a more or less Romantic style that reflected the influence of earlier artists from Rembrandt van Rijn to Francisco de Zurbarán. While he had moderate success, no one would call him an important artist in Paris. Courbet, who would later call himself “the most arrogant man in France,” took a risk with A Burial at Ornans and created the work that helps to define Realism in French painting.

Who came to the funeral?

Courbet showed the mourners gathered in a new cemetery just outside of Ornans. The priest (in black, just to the left of the kneeling gravedigger) led the procession into the cemetery followed by the crucifix, the coffin, and three generations of mourners who have stopped at the graveside before the final interment. Courbet pushed all of the figures to the foreground creating a frieze of bodies in black. A gravedigger in shirtsleeves kneels in front along with a dog that seems to have just wandered into the scene on the other side of the grave, enhancing the sense that Courbet has depicted exactly what occurred. While the painting was carefully composed and painted over time, he worked hard to make it seem as if we are witnessing life as it happened.

Who were these people attending a country funeral? The oldest generation stands closest to the grave. Those men in old-fashioned breeches represent the generation of the deceased man, Courbet’s great-uncle, who had all lived through the French Revolution of 1789. It’s possible that one of the pall-bearers at the far left represents Courbet’s maternal grandfather, M. Oudot, who had died just before Courbet began the painting. Courbet’s parents and their friends are found throughout the grouping, with his father in the top hat at the center of the group, and his mother comforting the deceased’s daughter at the far right. Among the younger generation are Courbet’s three sisters, shown with their handkerchiefs to the right. These are mostly middle-class provincial people, but kneeling near the grave is Antoine Joseph Cassard, the gravedigger. He was a skilled craftsman but he did this work at the cemetery to make extra money—like any regular citizen, a man who might be found anywhere in France. The landscape of Ornans

That striking horizontal line of figures dominating the foreground takes our attention away from the landscape in the background. Two Ornans landmarks, the cliffs of the Chateau d’Ornans and Roche du Mont, rise up on either side of the canvas. These sites and other places well-known to Courbet frequently appear in his work. The Painter’s Studio: A Real Allegory Summing Up Seven Years of My Life as an Artist serves as a reminder of the importance of landscape painting in the career of Courbet who painted the sites around Ornans again and again, developing an excellent reputation and success as a landscape painter.

When he submitted the painting to the Paris Salon of 1850–51, Courbet called it: “Painting of human figures, historical account of a burial at Ornans.” When the Parisian viewers saw it, few knew what to make of a painting that broke so many rules. Today, the work is often thought of as Courbet’s response to the Revolution of 1848 when workers rose up in Paris and other cities to insist upon the right to vote and greater access to economic power. With that in mind, A Burial at Ornans functions as a painting that raises the status of the everyday citizen to that of a monarch or god—leveling social class. For those viewers in 1850, it was a bit more complicated. Some focused on the appearance of the mourners, calling them ugly caricatures, revolting, and comical. The portraits reminded them of group caricatures of Parisian celebrities or other composite images similar to class photographs. Why, they wondered, have such specific portraits of common people in what should be a painting of a serious occasion? Courbet’s friends and supporters saw it differently. They understood that the painter had spent hours in galleries at the Louvre filled with Dutch and Spanish paintings from the seventeenth century, so his painting recalled the dark costumes and even the compositions of group portraits and other images by artists like Rembrandt and Frans Hals. Later writers even compared it to the lower half of El Greco’s Burial of Count Orgaz where the figures are similarly arrayed across the bottom of the canvas.

The impact of A Burial at Ornans was remarkable. While many artists (such as Daumier and Millet) can be considered Realists, A Burial at Ornans defined the term for most of the public and opened up new subject matter for painters. In the painting, Courbet asserted that everyone—be they the poor, the middle-class, the provincial laborer or landowner, or even the most powerful person in Paris—was a subject for the art as long as everything the artist painted reflected the realities of modern life.

This painting at the Musée d’Orsay, Paris

T. J. Clark, Image of the People: Gustave Courbet and the 1848 Revolution (University of California Press, 1999). 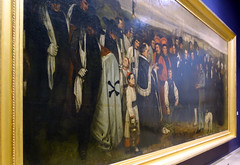 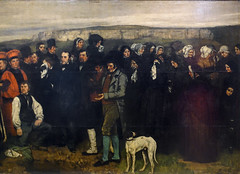