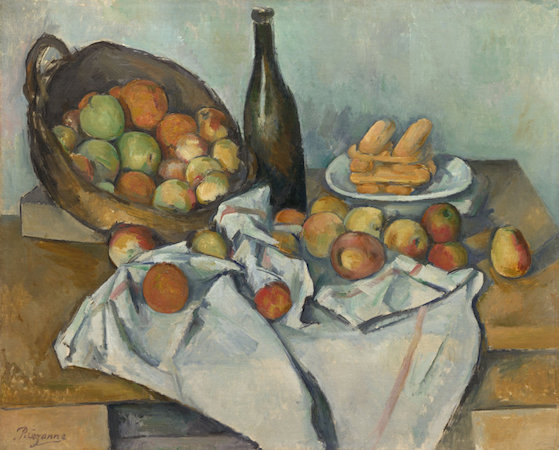 In David’s Neo-Classical era, still life was considered the least important subject type. Only minor artists bothered with what was then seen as the most purely decorative and trivial of painting subjects. The hierarchy of subjects went roughly from the most important—historical and religious themes (often very large in scale); to important—portraiture (usually of moderate scale); less important—landscape & genre (themes of common life, usually of modest scale); to least important— still life (generally small canvases). 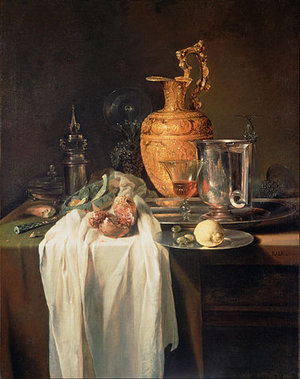 There had been one significant historical exception. In the 17th century in Northern Europe and particularly in the Netherlands, still life blossomed. But this period was brief and had little impact in France other than in the work of Chardin. So why would Cézanne turn so often to this discredited subject?

It was the very fact that still life was so neglected that seems to have attracted Cézanne to it. So outmoded was the iconography (symbolic forms and references) in still life that this rather hopeless subject was freed of virtually all convention. Here was a subject that offered extraordinary freedom, a blank slate that gave Cézanne the opportunity to invent meaning unfettered by tradition. And Cézanne would almost single-handedly revive the subject of still life making it an important subject for Picasso, Matisse, and others in the 20th century. 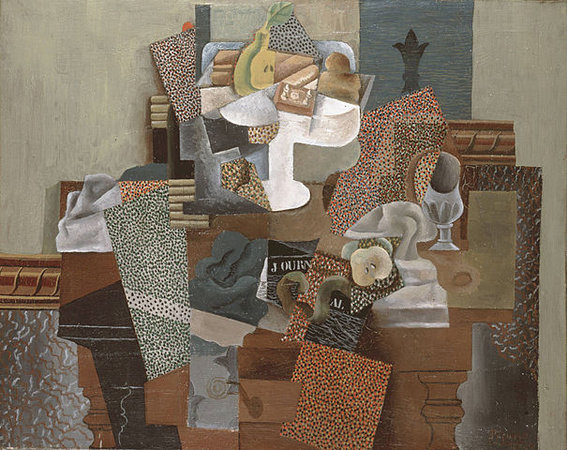 The image at the top of this page looks simple enough, a wine bottle, a basket tipped up to expose a bounty of fruit inside, a plate of what are perhaps stacked cookies or small rolls, and a tablecloth both gathered and draped. Nothing remarkable, at least not until one begins to notice the odd errors in drawing. Look, for instance, at the lines that represent the close and far edge of the table. I remember an old student of mine remarking to the class, “I would never hire him as a carpenter!” What she had noticed was the odd stepping of a line that we expect to be straight.

But that is not all that is wrong. The table seems to be too steeply tipped at the left, so much so that the fruit is in danger of rolling off it. The bottle looks tipsy and the cookies are very odd indeed. The cookies stacked below the top layer seem as if they are viewed from the side, but at the same moment, the two on top seem to pop upward as if we were looking down at them. This is an important key to understanding the questions that we’ve raised about Cézanne’s pictures so far. 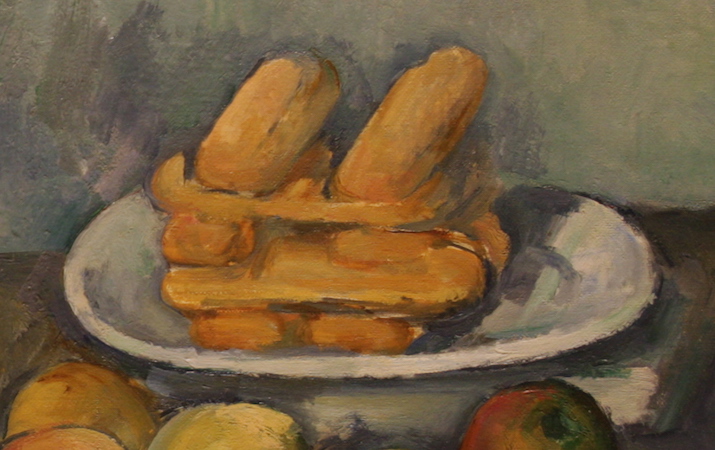 Like Edouard Manet, from whom he borrowed so much, Cézanne was prompted to rethink the value of the various illusionistic techniques that he had inherited from the masters of the Renaissance and Baroque eras. This was due in part to the growing impact of photography and its transformation of modern representation. While Degas and Monet borrowed from the camera the fragmenting of time, Cézanne saw this mechanized segmentation of time as artificial and at odds with the perception of the human eye. By Cézanne’s era, the camera did shatter time into fragments as do non-digital cameras that can be set so that the shutter is open to light for only 1/1000 of a second.

Cézanne pushed this distinction between the vision of the camera and of human vision. He reasoned that the same issues applied to the illusionism of the old masters, of Raphael, Leonardo, Caravaggio, etc. For instance, think about how linear perspective works. Since the Early Renaissance, constructing the illusion of space required that the artist remain frozen in a single point in space in order maintain consistent recession among all receding orthogonals. This frozen vantage point belongs to both the artist and then the viewer. But is it a full description of the the experience of human sight? Cézanne’s still life suggests that it is not.

If a Renaissance painter set out to render Cézanne’s still life objects (not that they would, mind you), that artist would have placed himself in a specific point before the table and taken great pains to render the collection of tabletop objects only from that original perspective. Every orthogonal line would remain consistent (and straight). But this is clearly not what Cézanne had in mind. His perspective seems jumbled. When we first look carefully, it may appear as if he was simply unable to draw, but if you spend more time, it may occur to you that Cézanne is, in fact, drawing carefully, although according to a new set of rules.

Seemingly simple, Cézanne’s concern with representing the true experience of sight had enormous implications for 20th century visual culture. Cézanne realized that unlike the fairly simple and static Renaissance vision of space, people actually see in a fashion that is more complex, we see through both time and space. In other words, we move as we see. In contemporary terms, one might say that human vision is less like the frozen vision of a still camera and more akin to the continuous vision of a video camera except that he worked with oil on canvas which dries and becomes static.

So very tentatively, Cézanne began the purposeful destruction of the unified image. Look again at the cookies, or whatever they are, stacked upon the plate in the upper right. Is it possible that the gentle disagreements that we noted result from the representation of two slightly different view points? These are not large ruptures, but rather, they suggest careful and tentative discovery. It is as if Cézanne had simply depicted the bottom cookies as he looked across at them and then as he looked more slightly down at the top cookies after shifting his weight to his forward leg. Furthermore, I’m not sure that he was all that proud of these breaks that allow for more than a single perspective. Look, for instance, at the points where the table must break to express these multiple perspectives and you will notice that they are each hidden from view. Nevertheless, in doing this, Cézanne changed the direction of painting.

This painting at the Art Institute of Chicago

Still Life tour from the National Gallery of Art

Selection on The Basket of Apples from Richard Brettell, Post-Impressionists. Chicago (1987, p. 67