Not to Invent but to continue…

“Everything has been done before” Ingres once wrote. “Our task is not to invent but to continue what has already been achieved.” Hardly any wonder then, being so suspicious of innovation, that his work is often set against the more radical painting styles of his age. 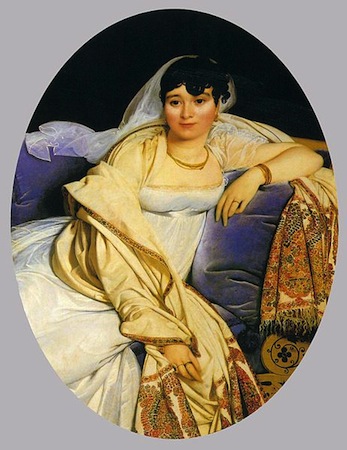 The conflict between Ingres and Delacroix, master of the nouvelle école (new school), is the stuff of art historical legend; in one corner, Ingres the Neoclassicist, all finesse, the consummate draughtsman, upholding the primacy of line; in the other, Delacroix the Romantic, all passion, a master of the virtuosic brushstroke, whose work abounds with expressive color.

And yet, to polarize them in this way, does an injustice to both artists. Certainly, as this painting demonstrates, Ingres was more than capable of bending the rules of academic practice and as such perhaps has more in common with his great rival than one might at first suspect.

The subject of the painting is Madame Philibert Rivière, the wife of a high-ranking government official in the Napoleonic Empire. Framed within an oval, the sitter reclines on a divan, her left arm resting on a velvet cushion. She looks out, her gaze meeting us, though obliquely, as if lost in her own thoughts. Comfortable with her beauty, surrounded by ample evidence of her wealth and high social standing, she does not need to seek our approval.

Her clothes signal her status. Dressed in a white satin dress, around her shoulder is draped a voluminous cashmere shawl which swirls rhythmically around her shoulders and right arm. Gold links shimmer on her neck and wrists. Even her carefully coifed raven black hair, bound in curls, as was the fashion, attests to her affluence, being held in place by the application of huile antique, an extremely expensive scented oil that only the rich could afford.

As with so many of his portraits, Ingres delights in capturing surface textures: the plush velvet; the crisp brightness of the silk, tanning the flesh; the twisted tassel of the cushion; the polished finish on the wood grain, all weave around and animate the figure. Note the way, for example, the shawl directs us to her face or the white muslin frames her hair, billowing off to the right so as to counterbalance the thrust of her left arm. Note too, the relationship between her corkscrew curls and the tendril decorations on the wooden base of the divan. Everything, it would appear, seems designed to harmonize the figure within the setting.

Contemporary critics, reflecting the taste of the time, thought that Ingres had taken things too far, describing the sitter as “so enveloped in draperies that one spends a long time in guesswork before recognizing anything.”  In Ingres’ defense, though, despite the richness of surface the figure still dominates the canvas. This is achieved, among other things, by that central vertical axis, running down from her right eye to the ring on her right hand. The imagined line is bisected by a pool of light – the brightest passage of the painting and one that also marks its central axis—reflected off the ribbon sash on her Empire Line dress. These subtle interplays of color and line create harmonious forms which some critics have likened to music.

The carefully worked out substructure is a response to the challenges created by the oval shaped frame. In order not to have the figure topple one way or another, the picture’s dimensions need to be accommodated to ensure the parts relate to the whole. Ingres manages this repeatedly in the painting. The supple arabesques formed by her shawl, for example, echo the pictorial space, as of course does the oval of her face. This is also true of the treatment of the body itself; most dramatically, Madame Rivière’s right arm has been deliberately elongated so as to rhyme with the curve of the frame.

At home in her imperial finery

In the end, we are left with the impression of an individual who is very much at home in her surroundings. So much so, in fact, as to be almost fortified by them. They compliment and flatter her too. Notice, for example, the way that muslin serves to veil her left shoulder, concealing any awkwardness in the passage between her arm and her torso kindly negating any signs of aging. In her mid-thirties, she looks ageless, a woman in the prime of her life secure in her Imperial finery. We are reminded of those Roman and Etruscan matrons reclining on their sarcophagi, unaffected by the ravishes of time, death and decay.

Biography of the artist from the National Gallery of Art

Portraits by Ingres: Image of an Epoch (Met publication—online)