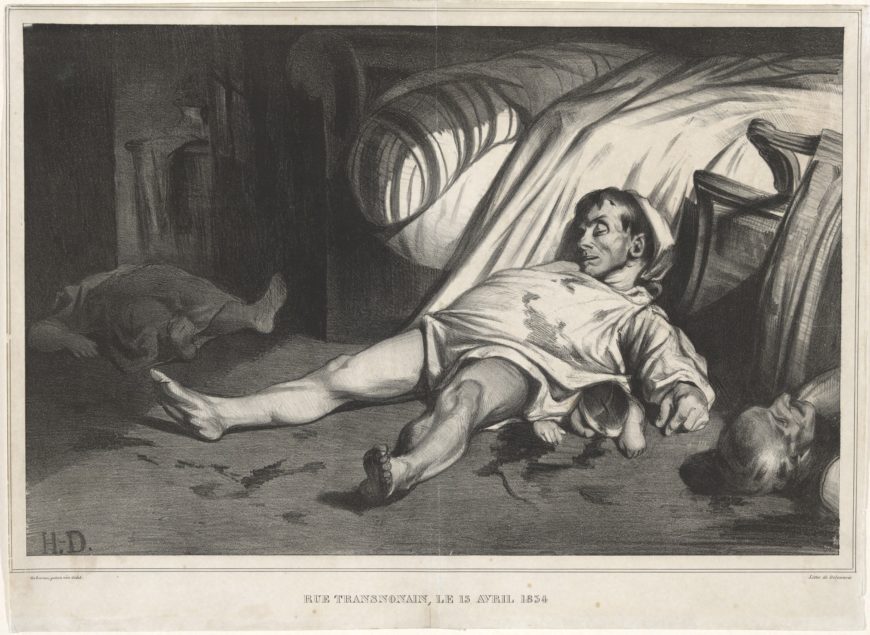 Everyone in Paris knew what had happened in the apartment building. It was on the corner of two streets—rue Transnonain and rue de Montmorency. On the night of April 13, 1834, soldiers of the civil guard entered the building going from apartment to apartment. Workers in the neighborhood had protested against the repression of a silk workers’ revolt  in the city of Lyon. The soldiers then entered the apartment building in response to shots fired from the top floor during the protest. Years later, survivors recalled hearing pounding on the apartment doors as the soldiers made their way in shooting, bayonetting, and clubbing the hapless residents.

Monsieur Thierry was killed while still in his bedclothes, Monsieur Guettard and Monsieur Robichet met the same fate. A recipient of the French Legion of Honor, Monsieur Bon was killed while trying to hide under a table. They killed Monsieur Daubigny, a paralyzed man, in his bed and left his wife and child for dead. Monsieur Bréfort was killed as soon as he opened his door and Monsieur Hue and his four-year old child met the same fate. The conservative papers talked of a nest of assassins firing on soldiers, the more liberal papers offered detailed accounts of the victims.

Parisians had lived with political repression enforced by the police and civil guard for years and street battles were nothing new. The Revolution of 1830, inspiration for Delacroix’s painting Liberty Leading the People, had overthrown the repressive monarchy that followed Napoleon’s rule. The new ruler, Louis-Philippe called himself the King of the French and was supposed to be more liberal. Instead, he clamped down on public dissent and the press much like his predecessors. Those who wanted the freedoms promised by the French Revolution of 1789 attempted another rebellion in June 1832. The writer, Victor Hugo, memorialized that insurrection which left over 100 dead on the streets of central Paris, in his book Les Miserables. Somehow, what happened on rue Transnonain was different.

Today, such an event would still be covered by newspapers, but also on social media and on cell phone cameras, but in 1834 it fell to Paris’s renowned printmaker, Honoré Daumier, to show the Parisians just what had happened. But how? How do you show a massacre? And what would be the risk of publishing a print that challenged the government so directly? Honoré Daumier came to Paris as a child when his father, a glazier and frame maker, moved his family to pursue his literary ambitions. The family was never well-off and Daumier worked from the age of twelve for booksellers and as an errand boy for a law firm to help support them. A friend of the family, the antiquarian and archeologist Alexandre Lenoir, gave young Daumier informal drawing lessons because the family could not afford any formal training for the gifted young artist.

Daumier continued to draw and study on his own, visiting the Louvre to draw sculpture and the Académie Suisse, an inexpensive studio without an instructor, where he could draw from the nude. Although he became a widely respected artist in Paris, Daumier never stepped away from his working-class origins, and perhaps this gave him the immense empathy found in his portrayal of those who perished on rue Transnonain.

The print is a lithograph—it used limestone and oil-based inks to create light and shadow similar to drawing or painting. Daumier experimented with this technique as a young teenager and later held a job working for a printmaker. By 1834, he had established himself as a caricaturist and political cartoonist, working for the publisher Charles Philipon by creating lithographs for his satirical, illustrated journals La Caricature and, after 1835, Le Charivari. Over his career, Daumier published well over 3,000 lithographs.

How to show a massacre

Among these many lithographs, Rue Transnonain stands alone for its brutal tone and unflinching commentary on what had only recently occurred. Daumier brings together a group of four bodies in one space, and extreme areas of light and darkness, to give the viewer one image that summed up the violence of that night.

A dead man in his bloody nightshirt, just roused out of the rumpled bed, lies prone across the composition with his body resting atop a bludgeoned child. The child’s head and chubby hands just emerge from beneath the man. Perhaps these bodies, foreshortened and moving toward the viewer, allude to Monsieur Hue and his child. To the left of the man and the child, an older man’s head enters the scene from the edge of the paper, in front of a toppled chair. These bodies, lit with a dramatic light, complement the darker portion of the composition on the other side of the sheet where a woman’s dead body moves away from the viewer into the darkness at the back of the apartment. Dark marks, likely smears of blood, litter the floor. The print is not a documentary image but one designed to evoke the brutality of the event in the starkest terms. There is no action or drama here; instead, Daumier leaves the viewer with only the stillness and silence of death.

In the years surrounding the publication of Rue Transnonain, journalists, publishers, and printmakers could face criminal charges, fines, and even imprisonment for their publications. In 1831, Daumier had created a print titled Gargantua depicting Louis-Philippe, the King of the French, as a corpulent blob with an oversized conveyor belt tongue consuming money provided by the laborers of France (Gargantua is also the name of a giant in a series of novels written in the 16th century by Rabelais). For this work, Daumier and his publisher Philipon were charged, tried, and sentenced to six months in prison. As he began work on the print, Rue Transnonain, Daumier understood the risk he was taking. Daumier created Rue Transnonain for the print subscription, L’Association Mensuelle Lithographique and published it in August 1834. Founded by Philipon, while he was serving time in prison for the publication of Gargantua, L’Association Mensuelle distributed caricatures to subscribers on a monthly basis and the funds raised supported freedom of the press and helped to pay off Philipon’s government fines.

Rue Transnonain was the last lithograph published in that series. Although government censors had approved the print, when it was exhibited in the window of a print seller, the police took note and quickly attempted to track down as many copies as they could. The police also confiscated the lithographic stone so that no more prints could be made. The remaining original prints of Daumier’s Rue Transnonain are among the most valued of Daumier’s works. After they published Rue Transnonain, Daumier and Philipon avoided prosecution but the ultimate cost was high. The government passed a new law restricting freedom of the press and proscribed political caricature. As a result, Daumier changed his subject matter, turning his eye away from direct political critique and toward social commentary.

This print at the Metropolitan Museum of Art

Interactive web exhibit from the Minneapolis Institute of Art

Biography of Daumier from the National Gallery of Art