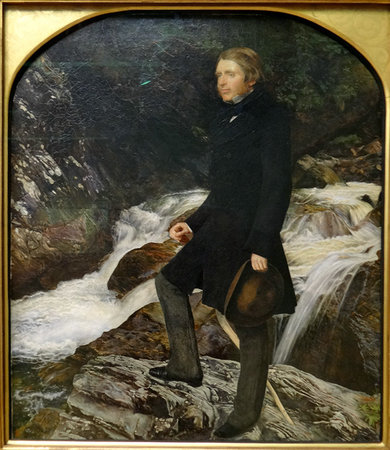 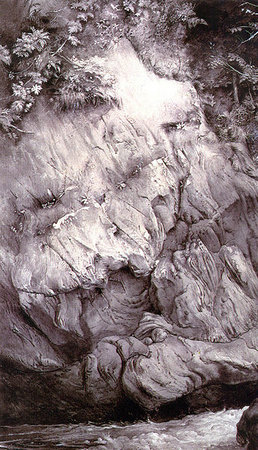 Millais’s Portrait of John Ruskin depicts one of the most influential art critics of the Victorian era. Shown in front of a waterfall in Glenfinlas Scotland, Ruskin is surrounded by the wild, rocky landscape, an observer of the beauty of the natural world.

The image is in keeping with Ruskin’s own writings which recommended that artists “go to nature in all singleness of heart,” as well as his personal interests as an amateur artist and dabbler in the burgeoning science of geology.

Ruskin also completed several drawings of the area, including Study of Gneiss Rock, Glenfinlas (Ashmolean Museum, Oxford) at the same spot as the background of Millais’s painting. In his own work, Ruskin shows the same meticulous attention to natural details. 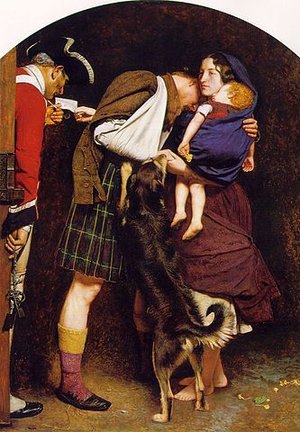 The relationship between the young artist and the established critic began when Ruskin wrote two letters to The Times defending the Pre-Raphaelite Brotherhood in 1851. Millais wrote to thank Ruskin, and Ruskin discovered a young artist he thought worthy of molding. In the summer of 1853, Millais was invited to visit Scotland with Ruskin and his wife Effie, who had previously posed for Millais’s painting The Order of Release 1746 (1852-3). Work began on the portrait almost immediately. Millais found the experience difficult, as Ruskin was an extremely controlling mentor, directing much of the production of the painting. Millais reported that he completed most of the background in Scotland, during July and August, although work on the picture was slow. In January of 1854 Ruskin sat for Millais in his studio and by April the face was completed. The painting was not finished until December 1854 when Ruskin’s father paid for the picture.

The end of a marriage

The painting was not the only thing to come out of the vacation, however. Effie was extremely unhappy in her marriage to the staid and conservative Ruskin, and she and Millais fell in love. She was ultimately to leave Ruskin and have their marriage annulled on the grounds of non-consummation. Effie married Millais in 1855 and the two eventually had eight children.  Unfortunately, her reputation was considered tarnished because of the rigid Victorian social code and many people, including Queen Victoria, refused to receive her. Millais, who was created a baronet in 1885 and eventually elected as the President of the Royal Academy shortly before his death in August 1896, became more and more a part of the artistic establishment, and Effie’s exclusion from society was a source of unhappiness. It was only towards the end of Millais’s life, largely through the intervention of Princess Louise, that Effie was received in polite society. 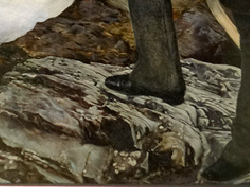 Millais’s Portrait of Ruskin is an intimate glimpse at one of the most important figures in the Victorian art world. The painstaking attention to the details of the rocks and fast moving water shows the Pre-Raphaelite style at its finest, while the upright, serious figure of Ruskin hints at the sitter’s personality.  The portrait is a rare meeting of art, science, and personal drama.