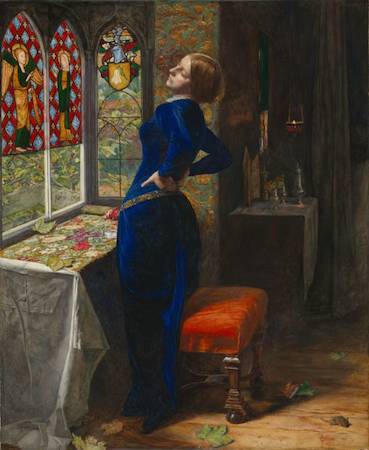 The Victorian idea of a medieval woman

Rising up to stretch after a long session of embroidery, Millais’ Mariana is the epitome of the Victorian idea of a medieval woman. Set in a vaguely Gothic interior with pointed arches and stained glass windows, the painting has an air of mystery and melancholy that is typical in Victorian depictions of the Middle Ages. The 1830s-50s saw an interest in the Middle Ages which appeared to offer an alternative to the problems of industrial capitalism of the Victorian era.

Also typical of the time, is the emphasis on the isolated female figure. The dark colors and straining posture of the woman lead us to wonder about her story, and the Victorian painter always has a story to tell.

An illustration for a poem by Tennyson

Mariana is an illustration to Tennyson’s poem, lines from which were included in the catalog when the painting was exhibited at the Royal Academy in 1851:

She only said, ‘My life is dreary,
He cometh not,’ she said:
She said, “I am aweary, aweary,
I would that I were dead!’

The inspiration for the poem was taken from the character of Mariana in Shakespeare’s play Measure for Measure, who was locked in a moated grange (an estate with a moat around it) for years after her dowry was lost at sea in a storm, causing her to be rejected by her lover Angelo. However, the happily ever after ending found in Shakespeare’s play is not even hinted at in either Tennyson’s poem or the painting by Millais. Instead the young woman is totally enclosed and isolated by her surroundings, with even the garden visible outside the window bordered by a high brick wall. The visual imagery does not seem to suggest a happy ending for Millais’ heroine.

As is typical with the Pre-Raphaelites, Millais’ painting shows his mastery of the minute detail. The viewer can almost reach out and touch the softness of her velvet dress, and the jewels in her belt glitter against the dark blue fabric. The beautiful stained glass windows depicting an Annunciation scene were adapted from the windows in the Chapel of Merton College, Oxford. Even the smallest details such as the small mouse that runs across the floor and the light of the lamp by the prie dieu in the corner are painted with the same attention to truth to nature found in the more prominent elements of the painting. 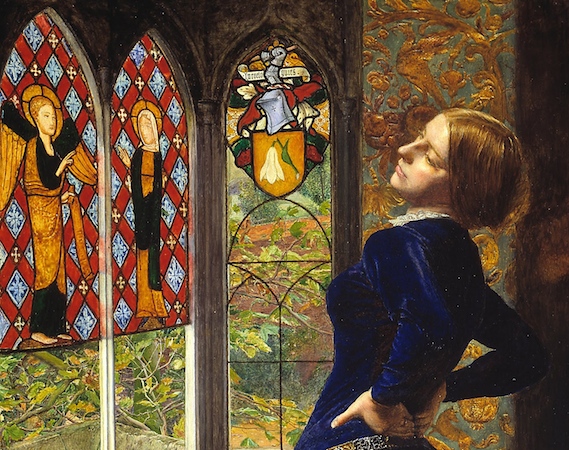 Mariana was exhibited at the Royal Academy in 1851. Although Millais and his fellow Pre-Raphaelite artists were not well received by the critics, the attacks were not as savage as Millais had endured the previous year over his Christ in the House of his Parents. In fact, the young but influential critic John Ruskin was persuaded to send two letters to The Times praising the new style for its skill in drawing, intense color and truthfulness to nature. This was a turning point, both for the future of the Pre-Raphaelites and for Millais, whose future association with Ruskin was to be so eventful.

In Mariana, Millais has created both an essay in Pre-Raphaelite execution and an evocative literary female portrait. The viewer feels the release of her aching muscles as she leans backward, however we are also palpably aware of her isolation. It is a work that is at once vibrant and colorful, but also cold and forbidding.