At first glance, Frederic Leighton’s Bath of Psyche, painted at the end of the nineteenth century by the President of the British Royal Academy, seems like the epitome of a conservative academicism. While contemporary painters like Walter Sickert were painting the lurid interiors of London’s music halls and tenement housing, here Leighton presents us with a female nude, skin polished to marmoreal perfection, absorbed in her own reflection.

Moreover, this figure has a pedigree including both classical statuary and nineteenth-century French academic painting. Based in part on a famous statue from antiquity, the Venus Kallypogos (“Nice Buttocks,” in the Archaeological Museum in Naples), Leighton muted the racy overtones of that ancient statue by turning the figure around to present a more modest three-quarter view of Psyche’s flank.

He also drew from French academic nudes like Ingres’s La Source of 1856, evident in the almost identical pose involving contrapposto and one arm raised overhead; the white drapery falling behind Leighton’s Psyche, painted in a frothy manner evocative of cascading water, replaces the urn with streaming water held by Ingres’s figure. 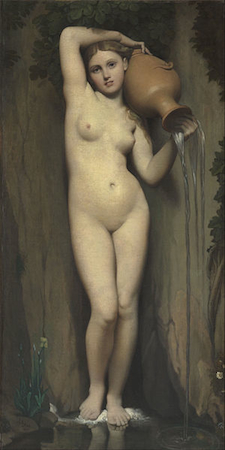 However, Leighton was a complex figure who challenges any neat division between the academic and avant-garde. In the 1860s, Leighton revived the genre of the nude in Victorian Britain, which had been languishing since the death of William Etty in 1849.

Whereas Etty’s nudes were voluptuous and his painterly technique was richly coloristic in the manner of Titian and Rubens, Leighton adopted a cool classicism. Instead of warm, dimpled flesh, Psyche’s skin is pale, smooth and flawless, like the chill surface of marble. Leighton further subordinates sensuality by privileging line over color. Rather than building up forms through color, like Etty, Leighton emphasizes the contours of Psyche’s figure and uses muted tones, giving an impression of precision and control rather than spontaneity and bravura. 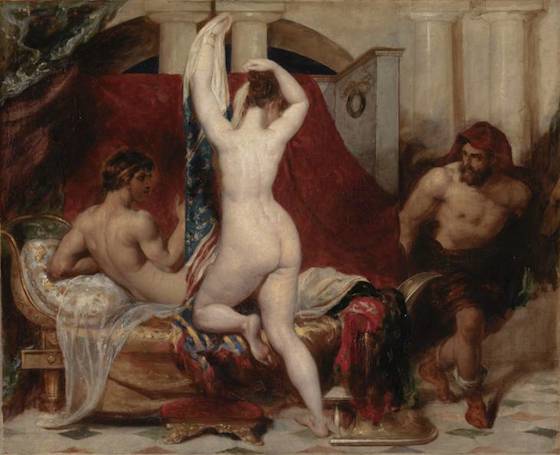 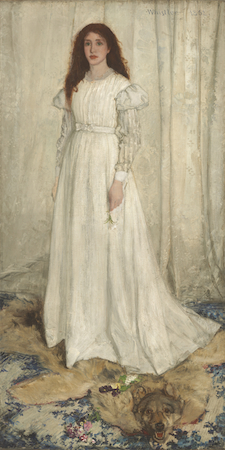 In fact, Psyche can be seen as an exercise in tones akin to Whistler’s versions of Symphony in White. Just as Whistler’s compositions consist primarily of different shades of white, Psyche’s reduced palette of colors juxtaposes different shades of white, from the milky tone of the drapery to the buff pallor of her skin and the honeyed off-whites of the marble architectural setting.

Leighton, like Whistler, was a key proponent of the avant-garde Aesthetic movement in Britain, which engaged with artworks primarily in terms of their visual properties—that is, in the relation of forms and colors in the service of beauty, rather than as a vehicle for narrative or conveying conventional morals. While the title of Leighton’s painting, Bath of Psyche, alludes to the story of Cupid and Psyche as told in Apuleius’s The Golden Ass, very little in the painting itself suggests this specific narrative. Leighton chose a moment in the story devoid of dramatic action—Psyche preparing her bath while she awaits her lover, Cupid, in his palace—a moment that is generic in its theme of woman gazing at her reflection. 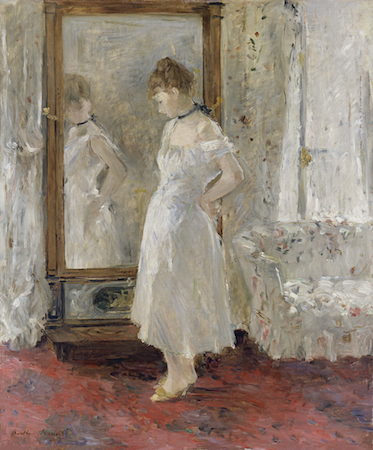 This theme was represented in more modern terms by artists like Berthe Morisot, whose Before a Psyche Mirror depicts a contemporary woman looking at herself in a mirror while adjusting her clothing (here, “psyche” is a type of mirror). The identity of Leighton’s figure is suggested in the reflective pool before her feet, which serves as her mirror. The figure of Psyche and her association with mirrors and reflections underscore the emphasis on vision in Aestheticism and the appreciation of beauty for its own sake. 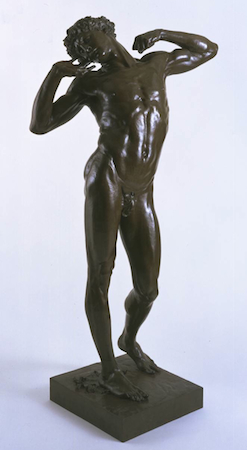 Although Leighton’s vision of beauty subdued overt sensuality, this is not to say his nudes exhibit prudishness or reactionary tastes. In the context of his time, Leighton’s nudes had a certain radical quality even as they reflected traditional sources. Rejecting the voluptuousness of Etty’s nudes, Leighton’s Psyche is somewhat androgynous with her small breasts and restrained curves. As if emphasizing her androgyny, Leighton has Psyche twist her upper torso so as to open it up from a side view to a near frontal one, and he raises her arms upward and outward, the sum effect of which gives her upper body the more masculine proportions of a triangle. In fact, Psyche’s general form and position resembles those of Leighton’s male nudes in his painting Daedalus and Icarus of 1867 and his bronze sculpture of 1886, The Sluggard.

Leighton’s personal life and sexual orientation has been the subject of much scholarly speculation, with his artistic production read in terms of homoeroticism. With regard to Psyche’s androgyny, though, Leighton may have just wished to temper the eroticism associated with more conventional female nudes so that the viewer may apprehend the beauty of the body at the highest artistic level, as pure form. In a letter to art critic Joseph Comyns Carr of 1873, Leighton wrote, ‘ . . . my growing love for Form made me intolerant of the restraint and exigencies of costume, and led me more and more, and finally, to a class of subjects . . . in which supreme scope is left to pure artistic qualities . . . These conditions classic subjects afford . . . as vehicles . . . of abstract form . . .” For Leighton, in other words, the classical nude was a means to express his love of form in and of itself, as an abstraction. Although he never went so far as to completely reject representation in art, his explicit appreciation of the purely visual, abstract qualities of form presaged the modernists of the next century.