One of the artist’s last works

One of the last large paintings created by Edward Burne-Jones before his death in 1898, Hope is an allegorical painting in the Renaissance tradition. The lone female figure is reminiscent of the graceful women of Botticelli, while the symbolic message of the painting is subtly, yet effectively conveyed. The slender figure is confined within a narrow space, a shackle around her ankle chaining her to the ground, while she reaches for the sky above and beyond the cage-like bars behind her. In her arms is a branch of apple blossoms, the symbol of hope. 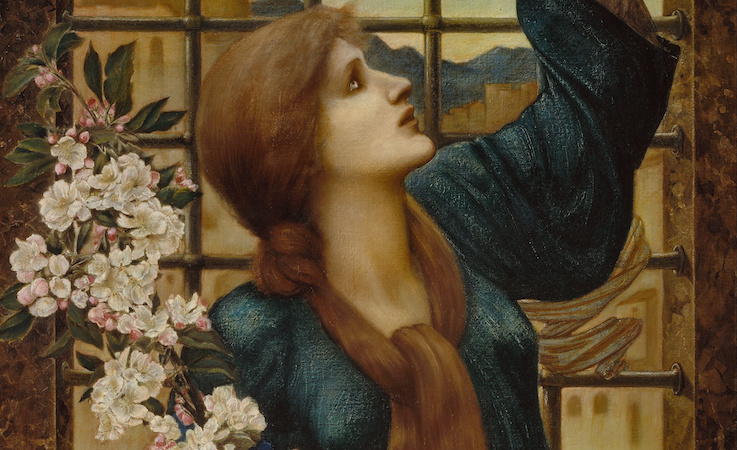 Hope was commissioned by Mrs. George Maston Whitin of Whitinville, Massachusetts, also a patron of John Singer Sargent. Mrs. Whitin originally requested a figure of a dancing girl, but Burne-Jones, upset over the recent death of his friend and collaborator William Morris, asked if he could produce a figure of “hope” instead.

Burne-Jones and Morris had been friends since they met at Exeter College, Oxford in 1853. Together the two had come under the influence of Gabriel Dante Rossetti when they participated in the scheme to paint murals on the subject of King Arthur in the Oxford Union. In 1861 Morris co-founded Morris, Marshall, Faulkner and Co., also know as “The Firm,” which created decorative elements inspired by a love of medieval imagery and a determination to move away from the mass production of industrial society. When the original company dissolved, Morris founded Morris and Co. in 1875, which carried on the work of creating textiles, carpets, wallpaper, furniture, stained glass and other decorative items. Many of the artists associated with the Pre-Raphaelite Brotherhood contributed designs for stained glass windows, tapestries and other items, while Morris himself specialized in designs for wallpaper and fabrics.

A member of the Socialist movement from the early 1880s, Morris believed in the power of art to transform society, and the importance of creating beauty in the home as a way of uplifting the spirit. His often quoted advice to “have nothing in your houses that you do not know to be useful, or believe to be beautiful,” is typical of his attitude that people should surround themselves with beautiful things as a buffer against the squalor of industrial society. Morris was also convinced of the superiority of handmade objects over things that were mass-produced. Unfortunately, his egalitarian principles were thwarted as the meticulous processes used to create his goods also made his products too expensive for most people.

Burne-Jones frequently designed stained glass for Morris, and Hope bears a strong resemblance to many of his designs. The vertical organization of the composition, fairly typical in the work of the artist, resembles an elongated church window. The bars behind her head form a grid similar to the iron bars that support the glass in a stained glass window. In fact, the painting bares a strong resemblance to the figure of Hope in an earlier stained glass window of Faith, Hope and Charity that Burne-Jones designed for Christ Church Oxford in 1871.

Burne-Jones once wrote “I mean by a picture a beautiful romantic dream of something that never was, never will be—in a light better than any light ever shone—in a land no one can define or remember, only desire—and the forms divinely beautiful.” In his painting Hope the artist puts on canvas what he earlier put into words, and at the end of a long career still shows his lasting dedication to the creation of beauty.

This painting at the Museum of Fine Arts in Boston

Burne-Jones in the Google Art Project

Elizabeth Cvitan. “Art in Evolution: The Association of Burne-Jones, Morris, and Rossetti in the Second Generation of Pre-Raphaelitism,” The Victorian Web (2006) 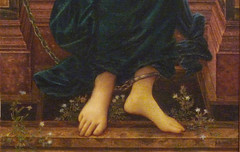 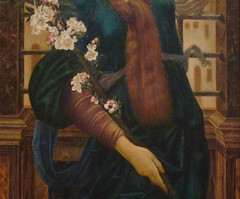 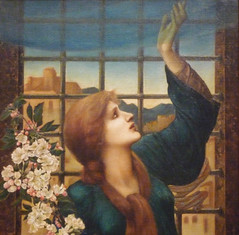 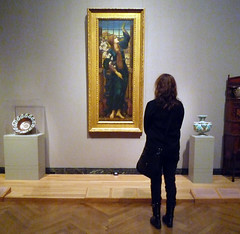