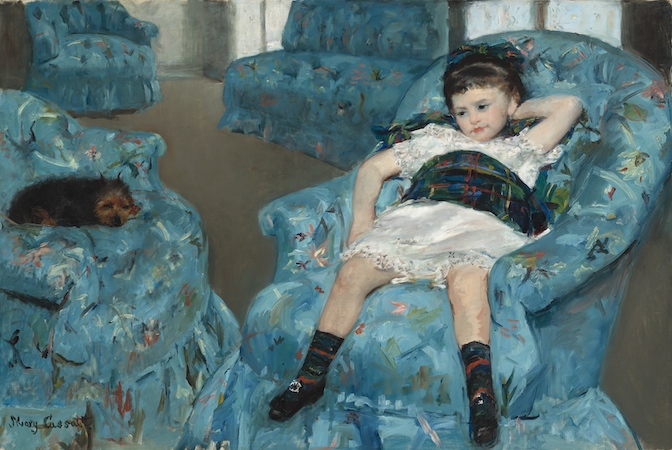 A citizen of the world

If, as one art historian¹ recently stated, Camille Pissarro was the glue that held Impressionism together, then Mary Stevenson Cassatt had similarly adhesive qualities. Giving the lie to the stereotype that Americans were provincial—even barbarous—in their artistic tastes, Cassatt was anything but that; a cultured woman, educated in London, Paris and Berlin and fluent in French and German, she spent four years at the Pennsylvanian Academy of the Fine Arts before studying in France under Jean-Leon Gérôme, Thomas Couture and others. 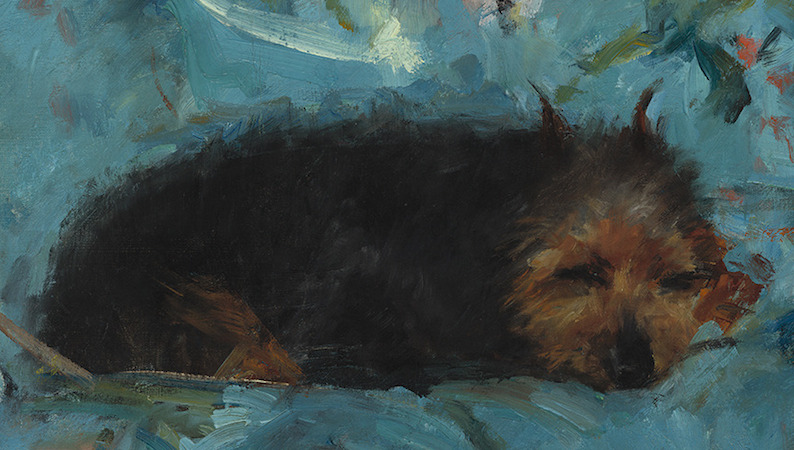 After the outbreak of the Franco-Prussian war she continued her travels, spending time in Italy and Spain, before settling in Paris once again in 1874, the year of the first Impressionist Exhibition. In the Salon of that year she exhibited a work that Degas, for one, admired. Over the following years, though, Salon success eluded her, largely, or so she judged, due to the prejudices of the all male selection jury.

It is understandable then that by 1877, when Degas invited her to join them, Cassatt would be drawn to this group of artists who were exhibiting independently and for whom gender did not appear to be a barrier for inclusion; certainly the quantity and quality of Berthe Morisot’s works in the first exhibitions were a match to those of the men. The same too can be said for the eleven paintings that Cassatt would exhibit in the fourth Impressionist Exhibition—included among them are some of her most celebrated paintings, notably Reading Le Figaro, Woman in a Loge, In the Loge and Little Girl in a Blue Armchair.

Little Girl in a Blue Armchair

Produced in 1878, it shows a girl sprawled on a blue armchair in a room with three other chairs of a matching design. She stares at the floor unaware or unconcerned about the portrait that is being painted of her. On the chair opposite her a lapdog dozes, a dark patch that neatly balances the dark tones of her clothing. There are no tables or ornaments, nothing to offer the viewer or the girl, who appears tired and bored, any distractions, only two large windows that are closed and heavily cropped by the upper edge of the canvas.

The dominance of the overstuffed furniture with its vibrant blue upholstery captures an odd sense of restlessness and languorousness, both matched by the girl’s pose. A parent would tell her to sit up properly and there is a rebellious, devil-may-care attitude in her comfortably lounging form. She has been dressed with due observance to fashion, the tartan shawl matching her socks and the bow in her carefully arranged hair; her shoes are spotless and the buckles sparkle; literally dolled up. All this primness however is of absolutely no concern to the girl whose unselfconscious pose presents as Petra Chu puts it: “a radically new image of childhood.” 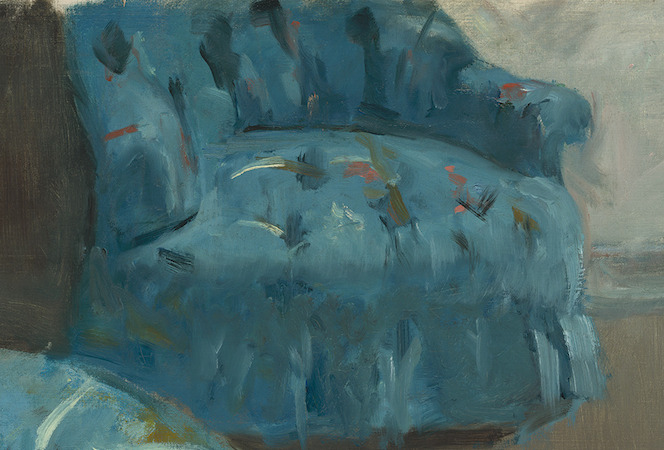 That a woman produced the image is, of course, no coincidence. The nursery in middle class homes was a space that was rarely if ever visited by men; child-rearing being an exclusively female occupation, little wonder then that few male artists painted babies or young children. But, of course, it is not in a nursery that we find ourselves, but a drawing room, clean to the point of sanitized, a room in which, just like her costume, the girl seems out of place, swamped by the massive abundance of chairs, a point emphasized compositionally in that each overlaps the other. The upshot of all this is to create a feeling—if not so extreme as alienation—then certainly a sense of disorientation, one that seems to capture, as subtly and incisively as any artist before her, the huffing and puffing tiresomeness a child feels within the social constraints of an adult’s world, a world that seems almost oppressively gendered. 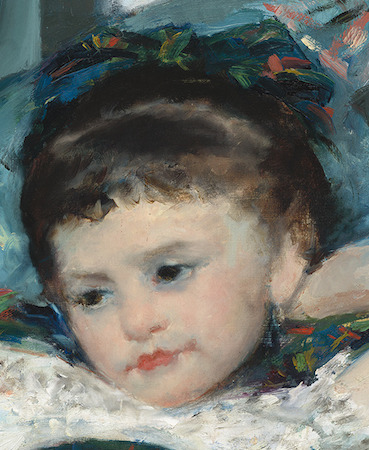 The girl herself was the daughter of a friend of Degas’s and the painting is often cited as an example of Degas’s influence on Cassatt. The two certainly had much in common, if only in terms of their backgrounds. Both were born into the upper-middle-class, the children of bankers, and both had strong connections to America, Degas’s mother and grandmother were American and he had stayed with his family in New Orleans in 1872-3.

The similarities in their work, certainly in this period, are also striking. In its asymmetrical composition, the casual, unposed treatment of the sitter, the weightiness and solidity of its forms in contrast to that grey mercurial dollop of negative space, its use of cropping and loose brushwork, as well as the interest in the private moment that we find so often in his pastels, the hallmarks of Degas’s work can clearly be found in Little Girl in a Blue Armchair.

The influence of Japanese prints is also a shared feature. Notice how in Degas’s famous L’Absinthe our eye is led in and up through the opposing diagonals of the marble-topped tables which seem almost to be floating. A similar effect is created by Cassatt in the blue furniture, to such an extent that we are left uncertain whose point of view we are looking from—a child’s at eye level or an adult’s from above. The composition, however, still coheres, the space and its various junctures having been carefully conceived to create a balanced whole. 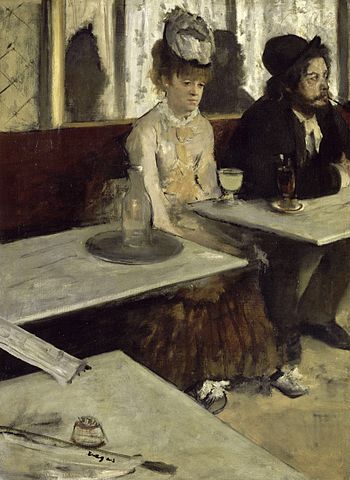 These startling similarities may be accounted for by the fact that Degas had a hand in painting the background, a practice that seems shocking today. Cassatt seemed not to mind, though, writing several years later of how Degas “advised me on the background, he even worked on the background.” The last part she underlined suggesting that she even considered it a privilege. It was common practice for male artists to take a patronizing approach to their female counterparts. “Manet sermonizes me”, Berthe Morisot complained to her sister Edma. It is inconceivable, however, to think that either Degas or Manet, whose influence is certainly in evidence in Cassatt’s lavish use of cobalt blue and in the tonal treatment of the girl’s legs, would or could have painted such an image.

Like Manet and Degas, Cassatt spent time in Italy copying the great works there, including, in her case, those of Correggio. Perhaps there is something of that old master’s dreamy bambini in the pose of the little girl too. Either way, running alongside her distinctly modern artistic vision, the classical tradition she was trained in is never far away. She could be quite snobby about it in fact. She thought little of Paul Durand-Ruel, for instance, the greatest of the Impressionist dealers, for knowing next to nothing about Italian art. This did not put her off providing him with contacts when he traveled to New York with Impressionist works, including two of her own, which he exhibited in the spring of 1886. “Had it not been for Durand-Ruel, caviar would have been a good deal rarer,” Renoir once said to his son.

Yet, in the international success story of Impressionism, Cassatt is also owed her due. For among the contacts she gave Durand-Ruel was the sugar magnate Henry O. Havemeyer, whose wife Lousine was a close friend of hers, having studied art together in Paris. As the couple’s artistic consultant for the rest of her life Cassatt played a central role in the development of one of the greatest private collections ever amassed in America. Today New York’s Metropolitan holds hundreds of paintings bequeathed by the Havemeyer family, including, the Museum claims, “the most complete group of Degas’s works ever assembled” and twenty works by Mary Cassatt, a woman remarkable not only for helping shape contemporary tastes in American connoisseurship, but also, over the course of her long artistic career, for producing work of extraordinary quality that helped transform American art itself into a world-class enterprise.

This painting at the National Gallery