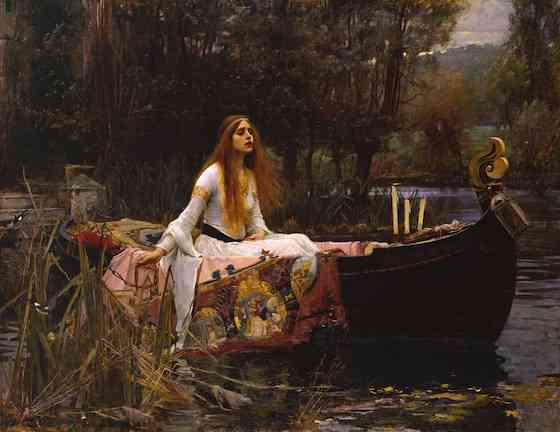 In many ways, Waterhouse’s The Lady of Shalott, painted in 1888, transports viewers back forty years—to 1848, when the Pre-Raphaelite Brotherhood (PRB) was formed.  Indeed, one commenter from Art Journal noted, “The type he [Waterhouse] chose for the spell-controlled lady, her action, and the garments in which he has arrayed her, bring his work into kinship with that of the “Pre-Raphaelites” of the middle of the century.” The subject of a vulnerable young red-haired woman in white gown, adrift in a riverine setting, is reminiscent of John Everett Millais’s Ophelia of 1852. Millais, one of the founding members of the PRB, had a much-acclaimed retrospective at London’s Grosvenor Gallery in 1886, which Waterhouse attended. 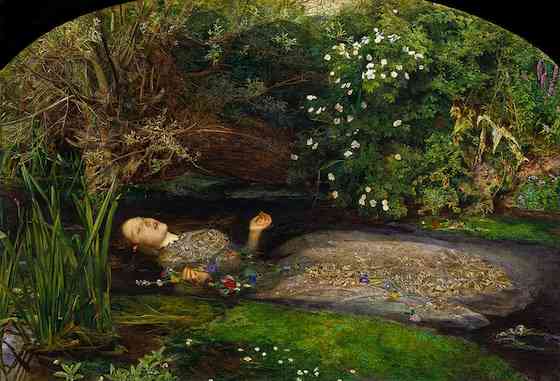 Waterhouse’s chosen subject, the Lady of Shalott, comes from Lord Alfred Tennyson’s Arthurian poem of the same name (he actually wrote two versions, one in 1833, the other in 1842). Tennyson was a favorite among the Pre-Raphaelites. In the poems, the Lady of Shalott lives isolated in a castle upon a river that flows to Camelot. Because of a curse, she is fated to spend her days weaving images of the world onto her loom, but on pain of death, she is forbidden from looking out her window. Instead, she has to look at images of the outside world as reflected in a mirror. One day she sees a reflection of the knight Lancelot and is instantly smitten, so she breaks her prohibition and looks directly at him through the window. Desiring to meet him, she leaves her castle and rides a boat down to Camelot. The horrible conditions of the curse set in, and she dies before reaching the shore. 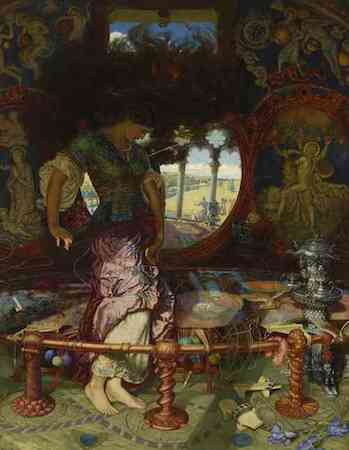 The Lady of Shalott was a prominent subject in the Pre-Raphaelite repertoire, the most notable example being William Holman Hunt’s illustration for an edition of Tennyson’s works published in 1857 by Moxon, which the artist reworked into a painting in the 1880s. Whereas Hunt highlights the moment of transgression, right after the Lady looks at Lancelot through the window, Waterhouse shows her on the boat to Camelot, her death foreshadowed by the lone candle that remains lit on the prow.

Nonetheless, as the Art Journal commenter went on to observe, there is a significant difference between Waterhouse’s work and that of the original PRB, specifically, in the technique: “[T]he almost impressionary delicacy of the rendering of willows weeds, and water is such as claims harmony with French work rather than what was so intensely English.”  The early works of the PRB showed an extreme attention to detail, reflecting John Ruskin’s principle of “truth to nature,” which advocated a faithful transcription of landscapes and objects. But Waterhouse’s technique is notably looser, revealing his experimentation with French Impressionism. Impressionism offered a different conception of “truth to nature,” one that was based more in optical truth, that is, how an object or scene appears to the eye in a fleeting moment, given the time of day and atmospheric conditions.

We can see the difference if we compare the reeds of Millais’s Ophelia (left) with that of Waterhouse’s The Lady of Shalott (right), positioned in analogous parts of the composition. Whereas Millais’s reeds maintain their physical integrity and rich detail when viewed up close, Waterhouse’s reeds lose some of their convincing illusionism and dissolve into obvious brushstrokes (even more apparent when you see the paintings in person!). The Lady’s tapestry, which drapes over the boat, seems to further highlight the difference between Waterhouse and the PRB. Whereas the early PRB were inspired by the bright jewel tones and minute details of medieval illustrated manuscripts and tapestries, Waterhouse took his inspiration from the plein air (open air) methods of the Impressionists, replacing jewel tones for the atmospheric silvers and greens of a cool English day. Like the Lady herself, Waterhouse turns away from an art of the cloistered life and towards an art that engages with optical effects.

Although the original PRB openly declared their allegiance to continental “Old Masters” such as Jan Van Eyck and the early Raphael, by the end of the nineteenth century Pre-Raphaelitism was cast as a specifically English phenomenon. As such, it was regularly pitted against the Impressionist trend, which solidified into a movement in Britain with the founding of the New English Art Club (NEAC) in 1886. Many figures in the art world were worried about the “Frenchification” of British artists. Marion Spielmann, editor of the Magazine of Art, noted with consternation at the Royal Academy exhibition of 1888: “that they [younger painters] are most of them imbued with the French spirit . . . is a fact that the Royal Academy cannot afford to overlook.” He then addresses the Council: “the future of the English ‘School’ is in their hands, and upon them devolves the responsibility of moulding it to the proper form.” 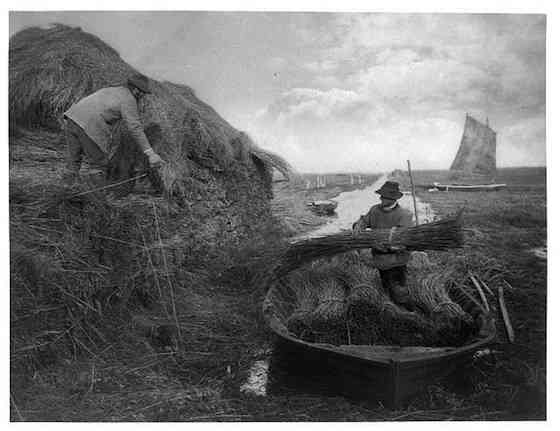 Spielmann also noted the “French flatness” of Waterhouse’s The Lady of Shalott. However, the painting’s debts to early Pre-Raphaelitism and that most “English” of poets, Tennyson, remained undeniable. The setting, moreover, suggested a thoroughly English landscape, evoking not only the Surrey of Millais’s Ophelia, but also bearing resemblance to the sort of marshy, reedy scenery that could be seen in Peter Henry Emerson’s photographs of English landscapes, as in this image, “Ricking the Reed,” from his album, Life and Landscape on the Norfolk Broads (1886). Despite initial remarks as to the “Frenchness” of its technique, The Lady of Shalott was ultimately accepted by the establishment as an “English” painting, and was acquired by Henry Tate for his museum of national art, where it still enjoys pride of place today as one of their most popular works.

Alfred Lord Tennyson. “The Lady of Shallot”. The Victorian Web.