A comet in the sky

William Dyce’s Pegwell Bay, Kent – a Recollection of October 5th, 1858 captures an historical moment with remarkable clarity. The painting shows the artist’s wife, his wife’s two sisters, and his son on a lonely stretch of beach near Ramsgate on the south coast of England. The day is particularly important as one can see Donati’s Comet in the sky. Discovered by Giovanni Donati on June 2, 1858, it was one of the brightest comets to appear during the 19th century. The comet had reached its perihelion, or the point where it is closest to the sun, just a few days prior to the date recorded in the painting. 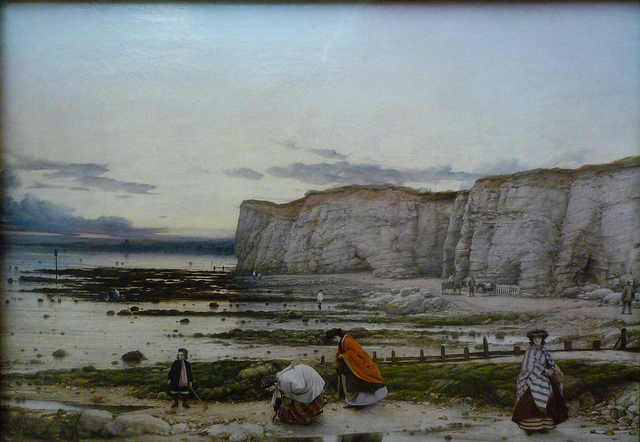 What is most incredible about the painting, however, is the minute attention to detail. A true Pre-Raphaelite in his approach, Dyce illustrated the intense “truth to nature” that characterizes much of the art of the period. This attention to detail had been championed by the critic John Ruskin in the first volume of his famous Modern Painters, published in 1843. In it, Ruskin advised artists to,

go to Nature in all singleness of heart, and walk with her laboriously and trustingly, having no other thoughts but how best to penetrate her meaning, and remember her instruction; rejecting nothing, selecting nothing, and scorning nothing; believing all things to be right and good, and rejoicing always in the truth.

Many young artists of the day, including John Everett Millais and William Holman Hunt, were influenced by Ruskin’s ideas and worked to bring as much naturalistic detail as possible into their paintings. 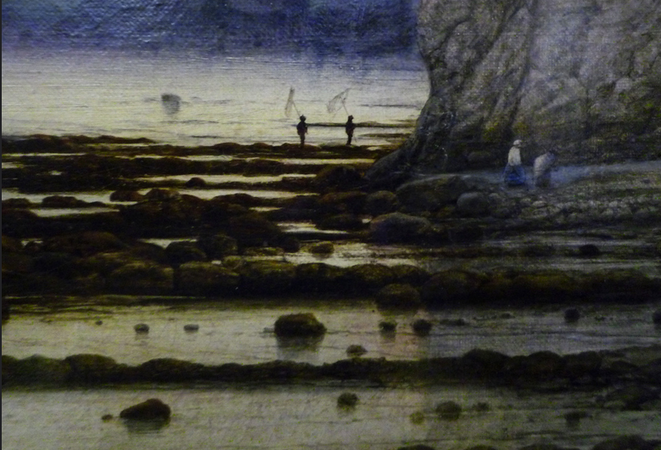 The observations of nature exhibited by artists like Dyce were also present in another Victorian preoccupation, science, and in particular, the burgeoning study of geology. Charles Lyell had published his Principles of Geology in three volumes between 1830 and 1833, and the entire scientific community was interested in the controversial attempt to reconcile the implications of geological time with the Bible. 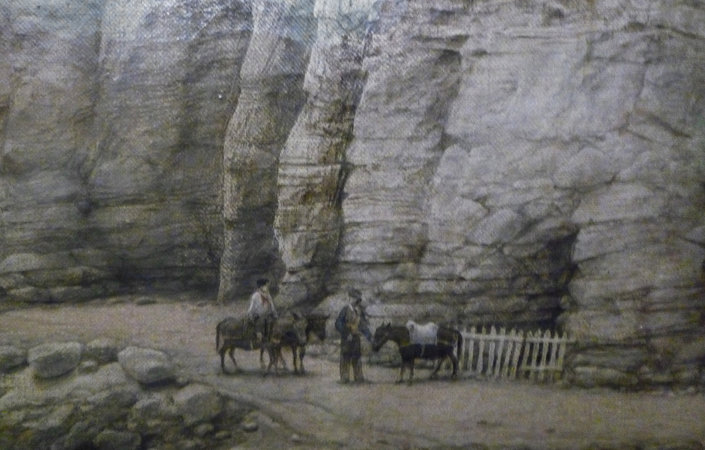 A little more than a year after the day captured in Dyce’s painting, On the Origin of Species by Charles Darwin was published, opening a floodgate of debate over the issue of religion versus scientific observation. The geologically unstable cliffs along much of England’s south coast were (and still are) a paradise for those in search of fossils, including the famous fossil hunter Mary Anning (1799-1847) of Lyme Regis, who is credited with the discovery of the first plesiosaur skeleton. The preserved remnants of geological time evident in places like Pegwell Bay provided the Victorians with much to think about.

In Dyce’s painting the angled light of the late afternoon setting sun emphasizes the striations in the towering cliffs above the shore. The detail delineates every variation in the rock. Pools of water, algae covered rocks and stretches of sand exposed by the low tide create opportunity for discovery at every turn. The figures are also extremely detailed. Two of the women in the foreground have their attention focused on collecting the shells left by the receding water, while the other woman and the child stare off in the distance. 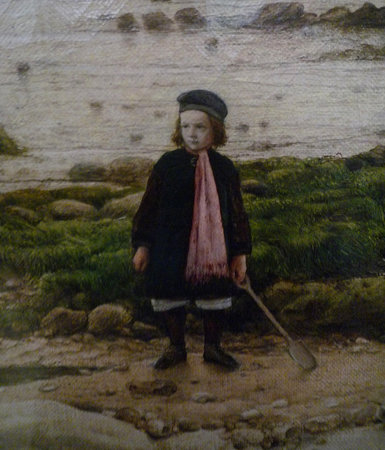 William Dyce was born in Aberdeen, Scotland. After studying at the Royal Academy Schools in London and in Rome, Dyce became well known for his paintings, and between 1837 and 1843 was Superintendent of the Government School of Design. He later won a competition to complete fresco paintings for the newly rebuilt Houses of Parliament, a project that occupied him almost until his death. However, Dyce was also interested in intellectual and scientific pursuits, for example, writing a prize-winning essay on electro-magnetism in 1830.

Dyce’s Pegwell Bay, Kent is a painting that evokes many time-honored themes. The variety of ages in the figures may represent the passage of time, while the setting sun and the autumnal chill in the air serve as a reminder of death.  However, this lonely stretch of beach is also a metaphor for many of the new issues that concerned the Victorians, such as the implications of scientific discovery. It is an image as timeless as the tide itself.

A video on this painting from the University of Cambridge 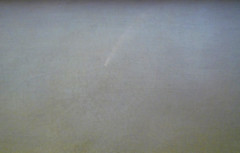 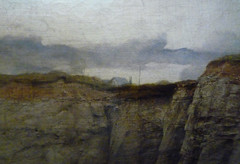 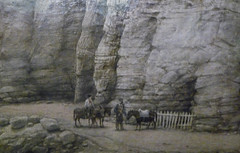 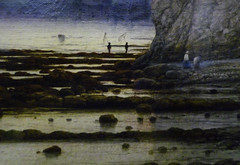 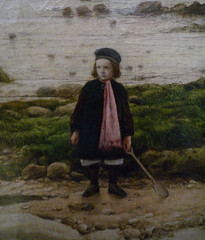 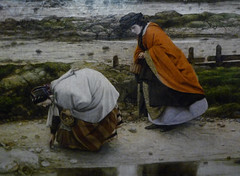 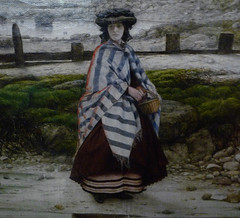 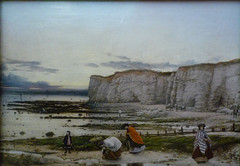