Beata Beatrix is one of many portraits of beautiful women painted by Dante Gabriel Rossetti in the last two decades of his life. During this time, Rossetti created many pictures of his favorite models luxuriously dressed in Renaissance-looking costumes and jewelry, often without the story or content associated with his earlier paintings, such as Ecce Ancilla Domini. Beata Beatrix is unique, however, due to the intensely personal symbolism and atmospheric quality of the sitter and her surroundings. Beata Beatrix is a portrait of Rossetti’s wife Elizabeth Siddal, an important model in the early years of the Pre-Raphaelite Brotherhood. Siddal was working in a hat shop when she met the artist Walter Howell Deverell. She posed as Viola in Deverell’s painting Twelfth Night (left). Taken with her lovely face and beautiful red hair, Deverell invited all his friends to come and see his new “stunner.” Others in the Brotherhood were also enthusiastic, and Siddal became a favorite model in many now famous early Pre-Raphaelite paintings, including Millais’s Ophelia (image below).

Rossetti and Siddal soon became a couple, spending the next decade in a tempestuous relationship. It was during this period that Siddal developed into an artist in her own right. By the time of their marriage in 1860, however, Siddal was in ill health and had to be carried to church. After a miscarriage, Siddal became depressed and, at some point, addicted to laudanum.

In February 1862 Rossetti returned home from a dinner to find his wife dead. Although her death was declared accidental by the coroner, Rossetti was distraught, and in a grand romantic gesture, placed his only copy of some recently written poems in Siddal’s coffin, nestled in her red hair. Several years later, however, Rossetti had her body exhumed and his poems retrieved by his friend and agent, Charles Howell, who reported that Siddal’s hair was still beautiful and red and had continued growing until it filled the coffin. 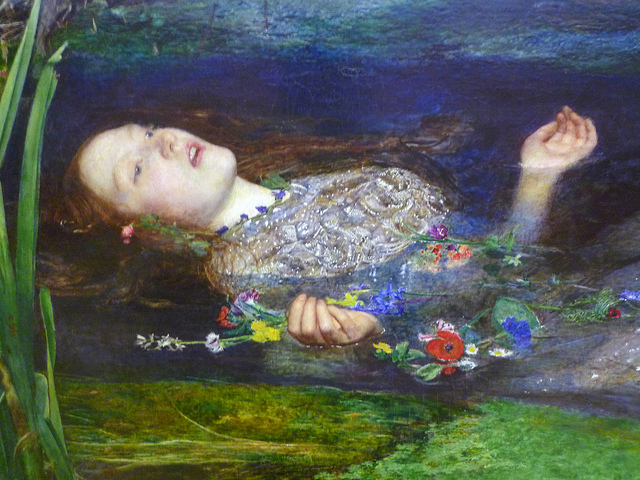 Beata Beatrixis filled with symbolism. Rossetti identified with the Italian poet Dante Alighieri and the title is reminiscent of Dante’s account of his own love, Beatrice. Behind Siddal are the figures of Dante and Love, with the Florentine landmark the Ponte Vecchio in the distance. The figure of Siddal, which was done from sketches completed before her death, looks towards heaven with her eyes closed. A bird, the messenger of death, swoops in and drops a poppy, symbolic of Siddal’s laudanum addiction, into her upturned hands. The fuzzy, atmospheric quality of the painting creates a dream-like intensity about the subject, and differs greatly from the crisp details found in many of Rossetti’s other famous pictures of beautiful women from this period, such as Monna Vanna (1866). After the death of his wife, Rossetti’s own health began to decline. He experienced depression, became addicted to drugs and alcohol, and in 1872 suffered a mental breakdown. He also became increasingly paranoid and even destroyed a section of the manuscript journal kept by his brother William Michael Rossetti during the early days of the Pre-Raphaelite Brotherhood. The missing section included the period when Elizabeth Siddal was first introduced to the members of the Brotherhood.

In her final appearance as a model for the Pre-Raphaelites, Siddal is immortalized as a tragic and romantic heroine. The soft dream-like setting and tragic beauty of the central figure give Beata Beatrix an otherworldly quality, evoking an air of melancholy and loss that everyone can relate to, and making it, justifiably, one of Rossetti’s most famous pictures.

This painting on the Rossetti archive

This painting on Google Arts and Culture