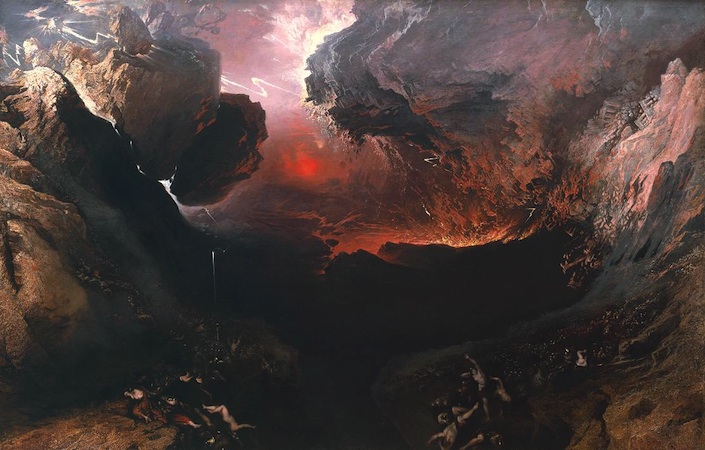 From the sublime to the ridiculous?

For some critics, in the hands of John Martin, the sublime (see note at the bottom of the page) in British landscape painting had slipped irrevocably into the ridiculous. For others, his work is innovative and exciting, a masterful re-energising of the landscape genre, and for evidence, they point to perhaps his most famous work, The Great Day of His Wrath. 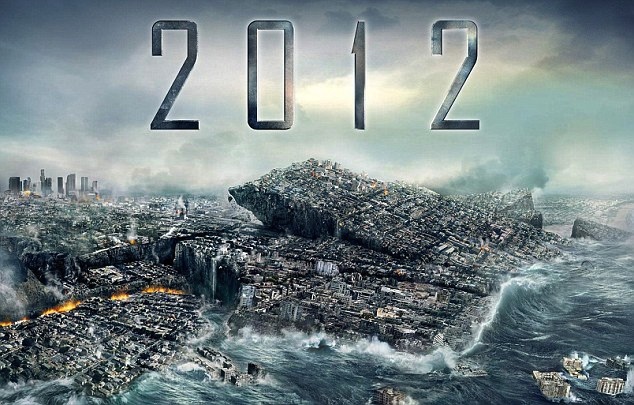 Whatever one’s aesthetic judgement of Martin’s work, it is hard to ignore the echoes it finds in today’s popular culture—think of all the big-budget apocalyptic films with their over-the-top special effects. Like the once popular sermons invoking hellfire and brimstone, there has always been a popular appetite for doomsday scenarios and the more vividly brought to life the better.

What Martin added to these old religious formulas was a new and distinctly scientific dimension. He also utilized the traditional formulas of landscape painting—in the same way as films such as 2012 use cinematic conventions to address contemporary anxieties about the changing environment and the effect that man has on it. 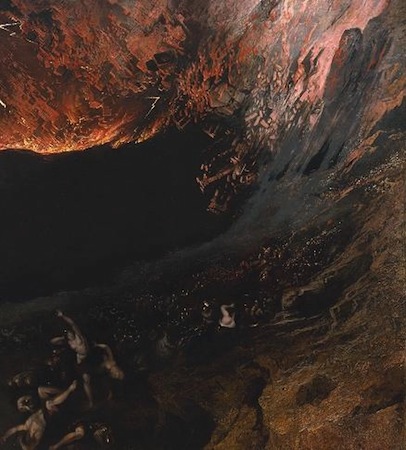 Part of a triptych of ‘judgement pictures’ inspired by the description of the Last Judgement in the Book of Revelation, The Great Day of His Wrath depicts this terrifying passage: “there was a great earthquake and the sun became black as sackcloth of hair and the moon became as blood. And the heaven departed as a scroll… and every mountain and island were moved out of their places.”

That Martin also worked as a theatre set designer is hardly surprising; in its large scale, its dynamic composition and its dramatic use of light and dark the painting is nothing if not spectacular.  But then that was the idea. 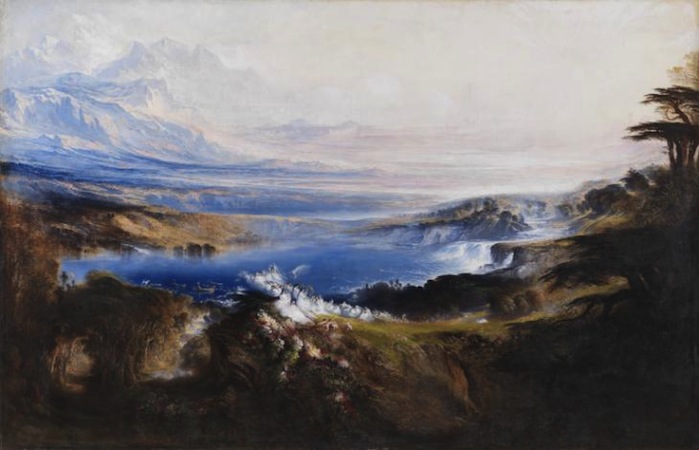 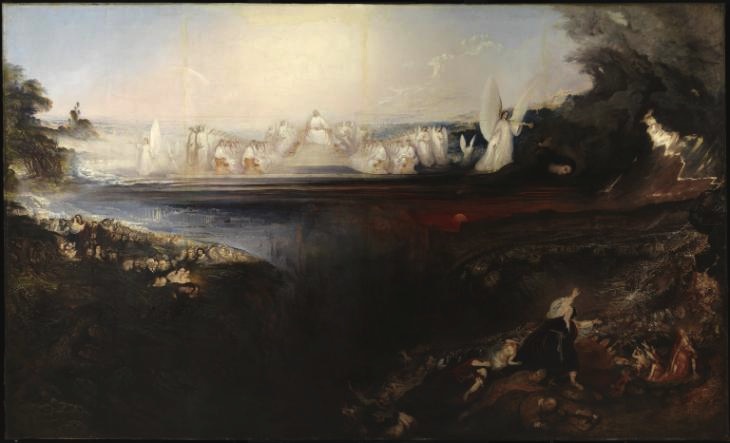 A Victorian audience would have paid to see this painting together with its two companion pieces, The Plains of Heaven (1851-3) and The Last Judgement (1853). Seated in rows of chairs, just like in a theatre, they would have waited in darkness for the performance to begin. Then the lights would go up, and using the latest technical gadgetry, forms in each of the paintings would be spotlighted: the lightning flash, the rolling mountain top with the ancient temple falling, the Whore of Babylon (a figure of evil mentioned in the Book of Revelation) lurching toward Hell’s Mouth. Accompanying this visual spectacle were sound effects and a blood-and-thunder script that would be read out by voices offstage.

It is hard to imagine when looking at the painting in the context of a modern picture gallery or on the Internet, but originally it would have been experienced more like a piece of theatre than a work of art. Such immersive spectacles were common in England at the time. In the early 1820’s, Gericault’s exhibited The Raft of the Medusa in London where it was similarly sold to the public as a visual spectacle rather than a revolutionary work of art. With no buyer for the painting in Paris, it was a shrewd financial move on Gericault’s part to have it shipped over.

As for Martin’s works, the exhibition was a triumph and went on with continuing success to tour across Europe and America. Sadly, though, Martin suffered a stroke after finishing the last of the three paintings, and he died soon afterwards.

Recently critics have tended to read The Great Day of His Wrath as a comment on the impact of industrialization, a point supported by the testimony of Martin’s son, who said that his father was inspired to paint the scene after making a journey at night through the “Black Country,” one of the most intensely industrialized areas in England at the time. A Londoner himself, the sorry state of the capital was also probably on Martin’s mind. In the middle of the nineteenth century, London was a pretty hellish place to live.

The “dark satanic mills” that the poet William Blake wrote of and the new factories and machinery of the industrial age had replaced farms and wrecked rural communities. Meanwhile, the population of cities across Western Europe and American exploded at a terrifying rate, causing slum dwellings, extreme poverty, and poor sanitation. 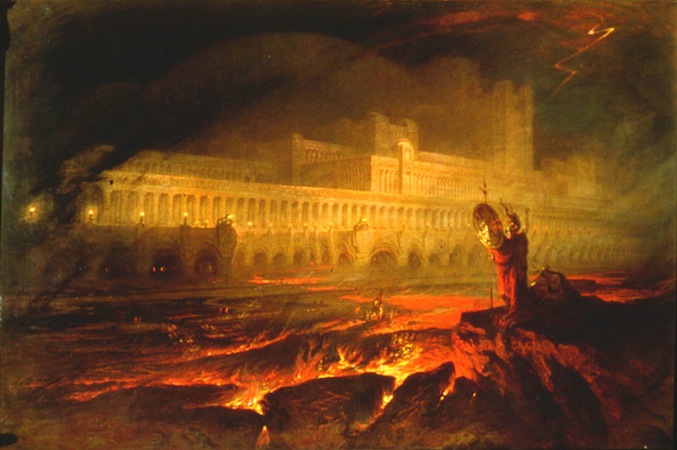 The Thames itself, the source of London’s water supply, also caused the deaths of hundreds every week from cholera during periods of epidemic.  Something had to done and in the late 1820s Martin took it upon himself to do it, submitting a proposal to parliament which provided a detailed plan for the construction of a sewage system that would help remedy the crisis. His plans were rejected.

As a belated repost, perhaps, in 1841, he painted Pandemonium in which Milton’s Satan stands before his diabolical city, a river of lava running past it.  The design of the building bears an uncanny resemblance to that of the as yet uncompleted Houses of Parliament situated right on the banks of the foul and pestilential Thames.

Painting in the age of Darwin

In addition to civil engineering, Martin was preoccupied with new and emerging branches of scientific inquiry, including geology and paleontology.  As an illustrator of natural history (typically Victorian, he liked to keep himself busy), he created imaginative reconstructions of dinosaur species based on fossil remains. In The Great Day of His Wrath the earth assumes a monstrous aspect, the tumbling boulders like the colossal jaws of a giant primordial beast devouring itself. 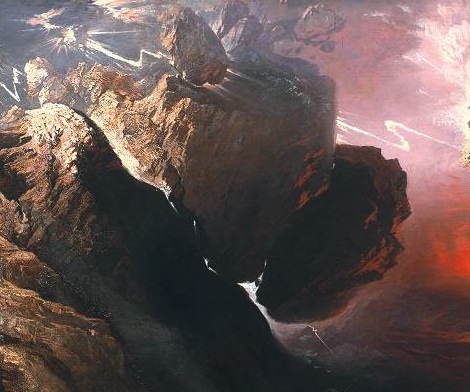 For Martin, this new vision of a dynamic, pre-historic Earth, constantly shifting and evolving, was a spur to the artistic imagination. Painting in the age of Darwin, his biblical/scientific works, like The Great Day of His Wrath, serve also to illustrate contemporary debates among theologians and scientists concerning the historical accuracy of Biblical sources. Geological studies in rock strata challenged theologians who used the Bible to calculate that the world was a mere six thousand years old. The notion that strange and unknown species might once have walked the earth would have been shocking to those that believed that the natural world reflected a divine and unchangeable model.

A note on the sublime

The “sublime” is a key concept in the history of art. The word itself dates back to the ancient Greek writer Longinus, who put forward the idea that art should not just be well formed but also sublime, that is to say capable of moving or transporting us emotionally. For examples of this he points to the epic poetry of Homer and Virgil.

The modern meaning of the word, used to describe that which inspires awe and terror gained currency in the middle of the Eighteenth Century and was defined first by the Irish philosopher and politician, Edmund Burke. Burke’s A Philosophical Enquiry into the Origin of Our Ideas of the Sublime and Beautiful (1757) is a crucial text in establishing notions of the Sublime. The Beautiful, according to Burke, is what is well-formed and aesthetically pleasing, whereas the Sublime is what has the power to compel and destroy us. The preference for the Sublime over the Beautiful was to mark the transition from the Neoclassical to the Romantic era.

Other philosophers sought to define the meaning of the sublime including Immanuel Kant and later, Arthur Schopenhauer. In his book The World as Will and Representation (1818), Schopenhauer outlined the difference between Beauty and the Sublime as follows:

Feeling of Beauty – Light is reflected off a flower. (Pleasure from a mere perception of an object that cannot hurt observer).

Weakest Feeling of Sublime – Light reflected off stones. (Pleasure from beholding objects that pose no threat, yet themselves are devoid of life).

Weaker Feeling of Sublime – Endless desert with no movement. (Pleasure from seeing objects that could not sustain the life of the observer).

Fullest Feeling of Sublime – Immensity of Universe’s extent or duration. (Pleasure from knowledge of observer’s nothingness and oneness with Nature).

This painting in the Tate Britain

The two works that, together with this one, form the triptych: The Last Judgment and The Plains of Heaven

Biography of the artist at Tate Britain 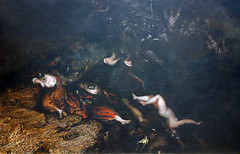 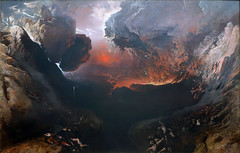 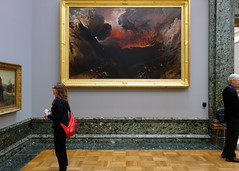 Cite this page as: Ben Pollitt, "John Martin, The Great Day of His Wrath," in Smarthistory, August 9, 2015, accessed December 4, 2022, https://smarthistory.org/martin-the-great-day-of-his-wrath/.