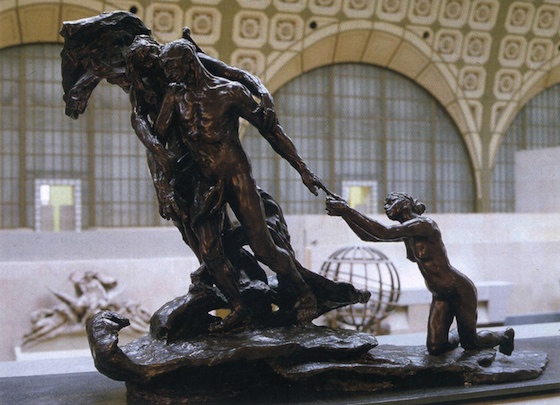 Towards the end of the nineteenth century, we find an increasing number of women taking their place among the most progressive artists of their age. It would be hard though to find one whose works are so radical in style and execution as Camille Claudel. The breadth and seriousness of her achievement have left a lasting legacy, one that particularly in recent years has secured Claudel’s reputation as one of the eminent sculptors of her age. Rather than Rodin’s lover/muse, who also happened to sculpt, Claudel is now universally acknowledged as a great sculptor in her own right.

Her masterpiece, The Age of Maturity, was exhibited in plaster in 1899, before being cast in bronze in 1902. The original work, commissioned by the French state in 1895, is believed to have been destroyed by the artist after the second casting in 1913.

The subject presents us with three naked figures, a young woman on her knees whose outstretched hands appear to have just released from their grip the hand of an older man, who is held in the arms of another, older woman, who appears to be compelling the man forward and away from the young woman. The title points to an allegory of aging, in which the man, the protagonist of the piece, is leaving his youth and moving towards old age and death. 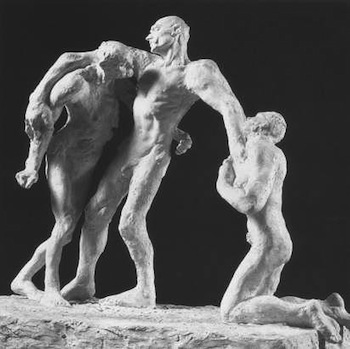 Claudel’s first version of the work, made in plaster in 1894-5, depicts a kneeling figure who connects physically with the man. The male figure seems passive, to the point of near collapse, his right arm hanging limply over the shoulders of the old woman, who leans in, glaring at the kneeling figure, evidently conscious of her as a rival. This interaction between the figures representing youth and old age is later rejected in favor of the more arresting dynamic in which the figures lurch forward in the same direction, as though compelled by the inescapable force of time.

In the final version, the futility of youth to halt its progress toward old age is captured sharply in the small but significant gap that isolates her from the other figures and in her relatively low level. Unlike the first version, in which the figures stand naked on a flat plinth, the final version makes expressive use of organic forms, notably the billowing drapery that unites the man and older woman and the three levels of rock which end in a wave-like curve, reminding us not only of the influence of Art Nouveau aesthetics on Claudel’s work in the late 1890’s, but also perhaps of the theatricality of Baroque sculpture. 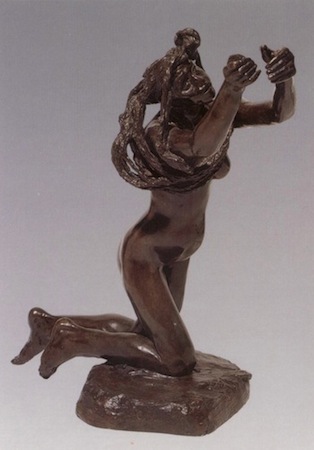 A year after the first version was exhibited, Claudel reworked the female figure in a piece entitled The Vanished God; a work remarkable for its expressive qualities; its head of matted locks, coiling ropelike around the smooth and rounded forms of the body; the face an image of anguish, the lips parted slightly, the eyebrows raised, the intensity of the gaze leveled toward the space between the cupped hands. The void itself is highly suggestive, raising the question, what is this god that has vanished? Is it a lover, perhaps, to whom her head tilts to kiss? (Claudel and Rodin had ended their relationship shortly before the work was made.) Is it love itself? Or faith? Is it, as some commentators maintain, a baby? This last, much disputed reading, citing the slight sag in the belly, links the anguish of the figure to Claudel’s own sense of despair having—it is said—terminated a pregnancy in 1892, the child being Rodin’s. The evidence for this though is scant. For the artist’s brother, the Catholic poet Paul Claudel, who certainly read the work autobiographically, what has vanished is something wholly intangible: “…my sister Camille, imploring, humiliated, on her knees, that superb, proud creature, …what is being wrenched from her, right there before your very eyes, is her soul.” 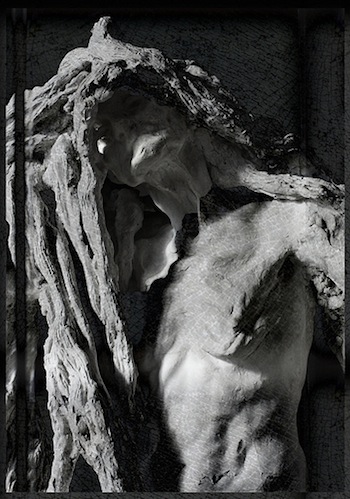 Precedence for the other female figure can be found in works such as Clotho.

As in Rodin’s poignant depiction of old age, She Who Was the Helmet Maker’s Once-Beautiful Wife, Claudel unflinchingly presents the impact of time on the human body in Clotho. There are notable differences, though. Whereas Rodin’s once-beautiful wife looks down seemingly ashamed of her aged body, Clotho’s haunting figure strides actively forward. 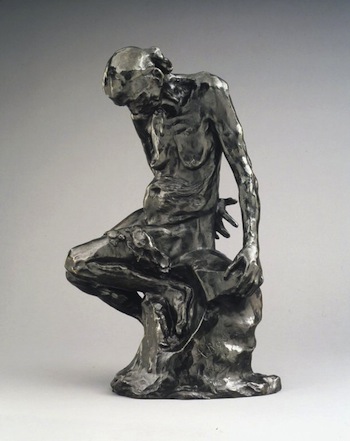 Like The Vanished God, she too sports a head of matted hair, though thicker and gnarlier, like the roots or branches of an old tree, reminding us perhaps of the Roman poet Ovid, whose Metamorphoses describes the mythological transformation of humans into natural phenomena, such as flowers, trees and constellations, a process in which the individual at the point of death is subsumed into the organic whole of the universe. Here, of course, that masterpiece of Baroque sculpture, Bernini’s Apollo and Daphne, the most famous sculptural interpretation of Ovid, might also come to mind.

The connection is more than merely visual, but reveals something of the mythological intent not only of Clotho, but of The Age of Maturity itself. Clotho, after all, is a figure from Greco-Roman mythology, the youngest of the three sister Fates, who decided human destiny. Indeed, an alternative title to The Age of Maturity is Destiny, a theme, central to Ovid’s narrative, that Claudel was clear to identify in a letter to Paul, written while working on her first version of this major work, stating that she intended to include in it a tree. Aside from Greco-Roman mythology, the tree motif is linked with destiny in many other cultural belief systems, the cross on which Christ was crucified, the Bodhi tree under which Buddha achieved enlightenment, the world tree Yggdrasil in old Norse that Odin sacrificed himself upon, a story illustrated by Danish artist, Lorenz Frolich.

Lorenz Frolich, Odin sacrifices himself to himself by hanging from the world tree Yggdrasil, 1895

Deciding against such a literal representation, however, in the final version of The Age of Maturity Claudel opts instead for the biomorphic form of that huge, twisting drapery, which when seen from the rear, takes on a distinctly arboreal character.

That the work is a symbolic representation of destiny was certainly the prevailing view of contemporary critics. In later times, however, informed by the tragic circumstances of Claudel’s life, The Age of Maturity has been read in more autobiographical terms, telling the tale of Claudel’s turbulent relationship with Rodin, a man twenty-four years her senior.

Claudel joined Rodin’s studio in 1884, assisting him in the completion of some of his most important works, including The Gates of Hell. The two became lovers, until in 1893 Rodin made the decision to leave Paris to settle in Meudon with his long-term mistress and the mother of his son, Rose Beuret, an episode most commonly cited as the inspiration for The Age of Maturity. With this in mind, rather than the inevitable passage of time, the theme of the work shifts somewhat to one of choice and how one’s choices come to define us. Claudel’s own feelings about Rodin’s decision seem clear enough. The almost diabolical Clotho figure is hardly flattering as a portrait of Rose, while the way the man’s groin is covered by drapery suggests a decision made less for the sake of modesty than to suggest the fact that Rodin’s rejection of passionate love in favor of security and domestic equilibrium has effectively emasculated him.

Fortunately, like all great works of art, The Age of Maturity withstands these alternative readings. Rather than cancelling each other out, instead they intersect and nurture more possible approaches to understanding what must stand as a key moment in the career of a female artist no longer confined in her choice of medium or of subject matter.

Claudel and Rodin from the Musée Rodin 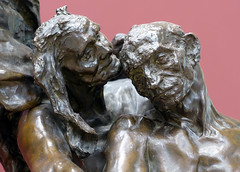 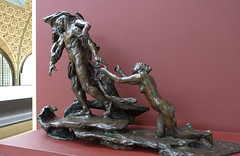 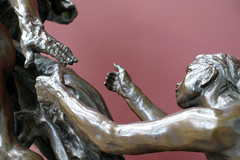 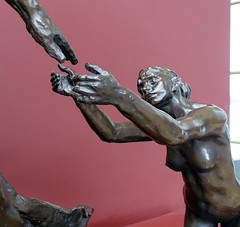 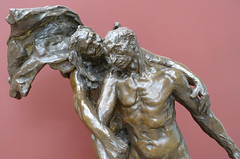 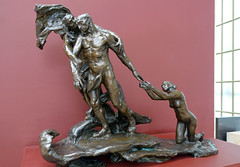 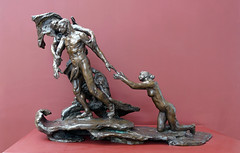