Fernand Khnopff, I Lock My Door Upon Myself, 1891 (Neue Pinakothek, Munich)

The essential aim of our art is to objectify the subjective (the externalization of the Idea) instead of subjectifying the objective (nature seen through the eyes of a temperament.¹ 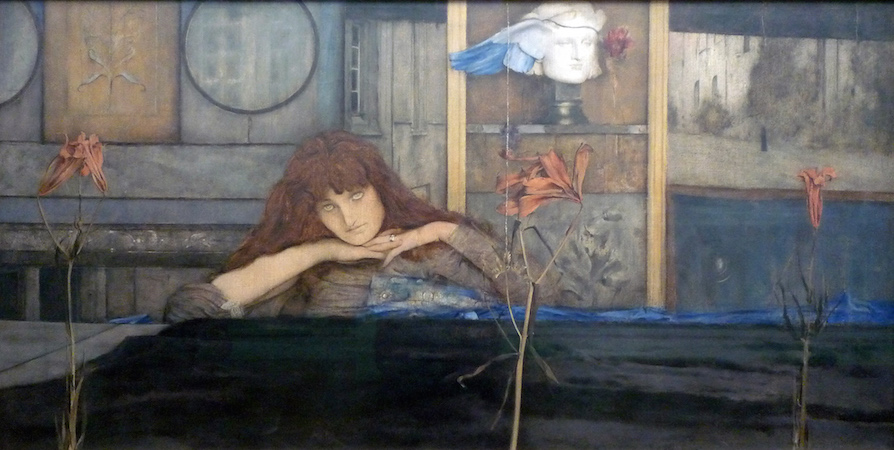 The aim of the Symbolists was to turn away from what they saw as the materialism of Impressionism. Instead, they sought to be evocative, to suggest a mood, or an abstract idea—to make their work analogous to poetry and music (neither of which depict the external world in a literal way). So perhaps it should come as no surprise that Khnopff’s painting, I Lock my Door Upon Myself (1891), takes its title and inspiration from a poem, “Who Shall Deliver Me?” by Christina Rossetti (the sister of Dante Gabriel Rossetti, a Pre-Raphaelite painter who was an important influence on Khnopff).

A bastion against the vulgar world? 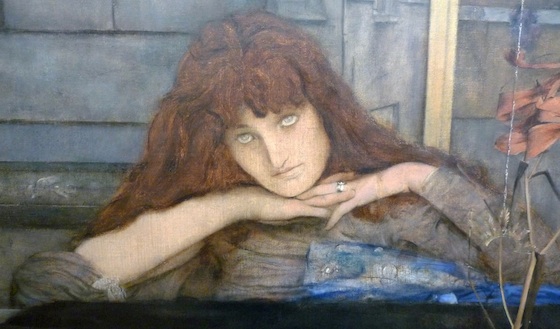 The poem’s title clearly recalls a biblical passage, “O wretched man that I am! who shall deliver me from the body of this death?” (Romans 7:24)—and the subject is an internal conflict from which only God can deliver us. In Khnopff’s hands though, Rossetti’s poem becomes a more general and secular meditation on inner conflict or mood. Yet the female figure, with her otherworldly stare, shows no sign of struggle.

Given the title and the stanza of the poem the title is taken from, are we to read the objects that surround the figure as “symbols” (in a personal, not literal, sense) of an inner struggle? Or perhaps we are not meant to look to the poem at all for the painting’s meaning—since Khnopff only took one line from it, “I Lock my Door Upon Myself.” If the latter is the case, then perhaps (as Michelle Facos suggests in her book, An Introduction to Nineteenth Century Art) the painting is about turning away from the world, similar to what Khnopff did in his personal life when he built a “fortress-like home” for himself in Brussels “as a bastion against the vulgar, outside world.” 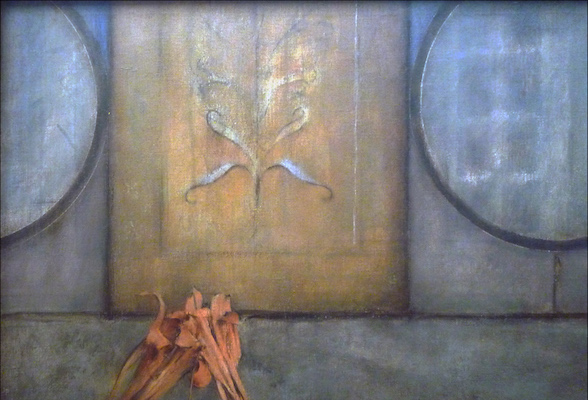 In the foreground of the painting are the three distinct sets of withering, orange irises which punctuate the three-part composition. Aside from the curvilinear form of the woman locked behind a table of some sort (or is it an altar, or a tomb?), the painting is dominated by circles, squares and rectangles, and everything—including the woman herself—is painted in muted tones. It is as though Khnopff is suggesting that the “reality” we see isn’t very real at all.

In the first segment, reading from left to right, we see part of a circle, a truncated rectangle with a decorative floral pattern, another circle that may be a mirror, and the shallow recess of a doorway that doesn’t seem to open onto anything, with a window it that similarly looks out onto nothing. 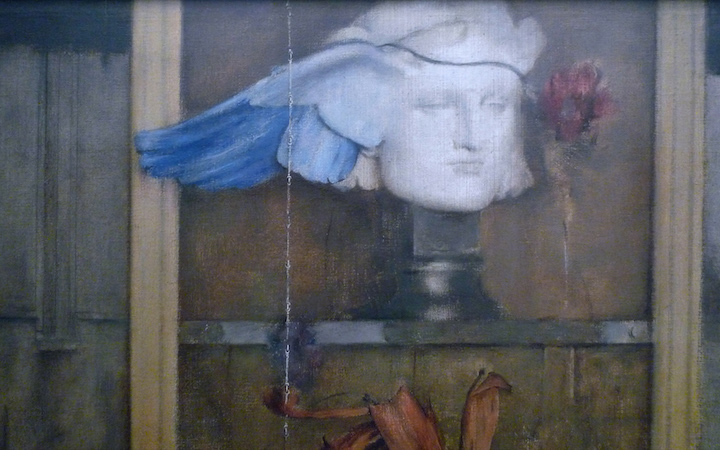 The next segment is divided into three horizontal bands framed by wide vertical planks. At the top is a shelf that holds a bust of Hypnos, the Greek god of sleep (brother of Thanatos, the god of death), and a red poppy. The bust is among the most sharply defined forms in the painting and its blue wing subtly echoes the red hair of the woman who sits below. In the right most segment, we see a lone figure in a desolate townscape reminiscent of Caspar David Friedrich’s Monk by the Sea (1809). 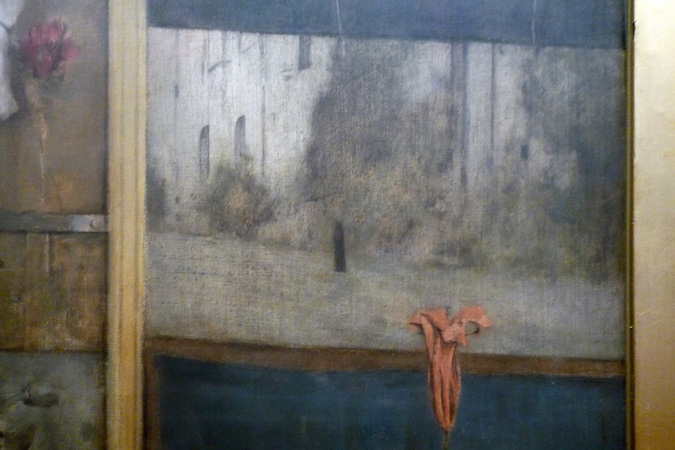 There are other objects in the painting that are even more mysterious, a small, crown-like charm dangles from above on a silver chain, a face perhaps, within two circles, on the lower right. And what is the long object on the table in front of the woman? And is that a spear beside her?

Of course we want to be able to read the painting, but so much of it is ambiguous and undecipherable. What we are left with is a mysterious and haunting image that speaks to the anti-materialist and inward-looking interests of so much art of the late nineteenth century.

The shift from modern life 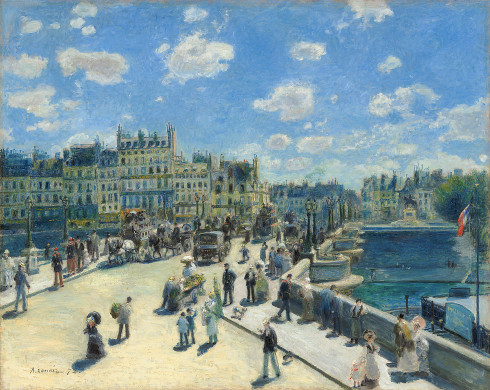 This shift from modern life, to the inner psyche had many causes. It was, at least in part, a reaction against the rapid industrialization and urbanization that occurred in much of Europe in the nineteenth century. And similarly, it was a reaction against the art that had celebrated this new urban reality (see, for example, Impressionist paintings of the city such as Auguste Renoir’s Pont Neuf, Paris).

One response to the rapid intrusion of modernity—a response favored by many late-nineteenth century artists—was to turn inward, “whereas Naturalists, Realists and Impressionists concentrated on the appearance of modernity, Symbolists explored its emotional, psychological, and spiritual aspects and searched for a pictorial language that could convey the experience of modernity.”²

WHO SHALL DELIVER ME? (by Christina Rossetti)

God strengthen me to bear myself;
That heaviest weight of all to bear,
Inalienable weight of care.
All others are outside myself;
I lock my door and bar them out
The turmoil, tedium, gad-about.
I lock my door upon myself,
And bar them out; but who shall wall
Self from myself, most loathed of all?
If I could once lay down myself,
And start self-purged upon the race
That all must run ! Death runs apace.
If I could set aside myself,
And start with lightened heart upon
The road by all men overgone!
God harden me against myself,
This coward with pathetic voice
Who craves for ease and rest and joys
Myself, arch-traitor to myself ;
My hollowest friend, my deadliest foe,
My clog whatever road I go.
Yet One there is can curb myself,
Can roll the strangling load from me
Break off the yoke and set me free

2. As quoted in Michelle Facos, Symbolist Art in Context, p. 61

The Symbolist Movement: To Make the Invisible Visible (Radford University)

James Panero, “The secret history of modern art: An exploration of the symbolist origins of Modern Art,” The New Criterion (December 2006) 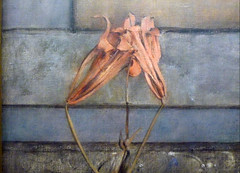 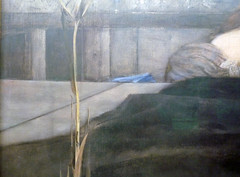 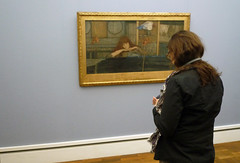 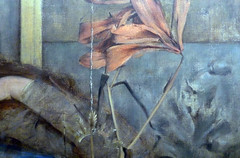 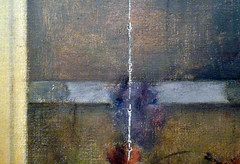 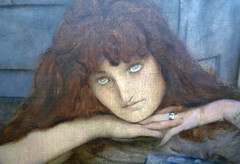 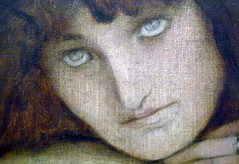 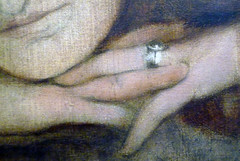 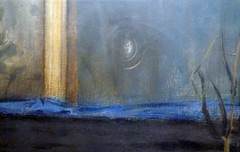 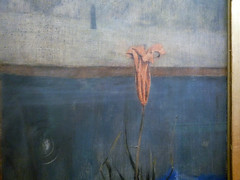 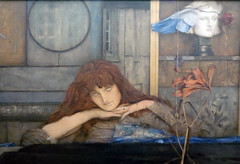 Cite this page as: Dr. Beth Harris and Dr. Steven Zucker, "Fernand Khnopff, I Lock my Door Upon Myself," in Smarthistory, August 9, 2015, accessed February 8, 2023, https://smarthistory.org/khnopff-i-lock-my-door-upon-myself/.