For Constable “Truth (in all things)” was what mattered. Not for him Turner’s clash of elemental forces – land, sea, sun and sky – creating those highly dramatic, almost abstract fields of color. Constable instead pursued an art that was, in his own words, “legitimate, scientific, mechanical.”

That the same artist could declare, without fear of contradiction, that “painting is but another word for feeling” should not surprise us. For what we might see as a conflict between the scientific and the emotional was for the Romantics nothing of the kind. For them reason and emotion informed and enhanced each other, so that truth gained through the filter of personal experience was considered of a higher order than that got by slavish reference to universal laws. 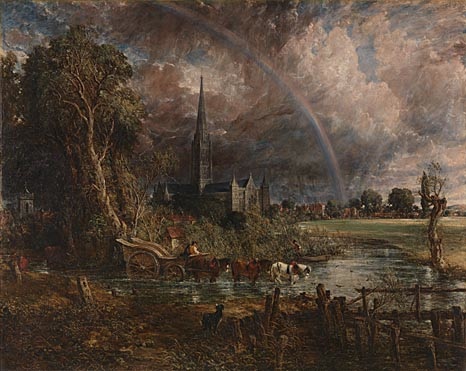 In this sense, Constable was a great empiricist, scrupulous in his recordings of natural phenomena but artistically aware enough to appreciate that these recordings were deeply informed by his own emotional being. Nowhere is this more apparent than in his treatment of the sky. “The sky is the source of light in Nature,” he wrote, “and it governs everything.” Certainly it is one of the most intriguing features in Salisbury Cathedral from the Meadows. Before getting on to that, though, the first question to ask is why Salisbury?

“I should paint my own places best,” Constable once said, referring to the Suffolk landscape he grew up in and which he painted with an almost religious devotion. Yet in the course of his life, Salisbury too became one his “own places”. 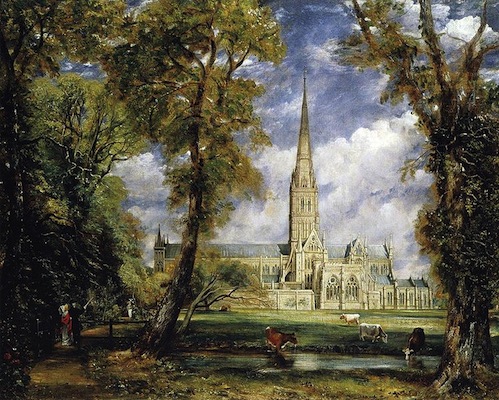 He first visited this small city in the west of England in 1811 on the invitation of the Bishop, one of his first and most important patrons, for whom he painted Salisbury Cathedral from the Bishop’s Gardens, a version of which can be found in New York’s Frick Collection. Over the years he made many more trips producing over 300 paintings and watercolors of the area.

It was in Salisbury, too, that the painter formed his closest friendship with the Bishop’s nephew John Fisher:  “we loved each other,” Constable wrote towards the end of his life, “and confided in each other entirely.”

“Church under a cloud”

It was to Fisher that he turned after the great shock of losing his wife in the autumn of 1828, making the trip west in the spring of 1829. It was Fisher, too, who suggested the title for his next painting: “Church under a cloud,” a title which, though in the end was rejected, is still helpful in understanding Constable’s motivations. 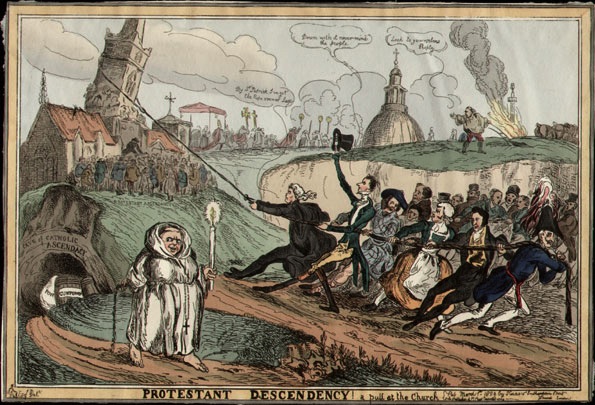 A caricature by William Heath from 1829 hints at what Fisher was getting at. In it we find the Prime Minister, Lord Wellington, and others pulling down the steeple of a church (here representing the Anglican Church, or the Church of England), while a Catholic monk holds a  lighted candle in one hand and trails gunpowder from his other, with the intent of blowing the rest of it up.

The image refers to the Catholic Emancipation Act of 1829, which allowed Catholics to sit in Parliament; a just and reasonable decision one might think, yet as the caricature shows not everyone agreed, including Fisher and Constable, who saw it as an assault on the fabric of the British establishment, the latter describing it as the ‘greatest mischief’ of Wellington’s government.  Perhaps this is why Constable painted the sky as he did, bearing ominously down on that masterpiece of English religious architecture., the very embodiment of the Church of England.

So what are we to make of it? – that Constable was a religiously intolerant, political reactionary, doggedly opposed to reform and the granting of rights to what had for centuries been an oppressed minority?  Most probably that is true. But then having abandoned Fisher’s suggested title in favour of the less politically charged Salisbury Cathedral from the Meadows, it seems equally likely that Constable was keen to avoid such a narrow reading of his work.

Salisbury Cathedral from the Meadows

Turning back to the painting itself, the scene depicts Salisbury Cathedral across the River Avon. The vantage point was well-considered. For many months Constable produced pencil and oil sketches from different viewpoints in preparation for the final design.  In the end, we are presented with a sort of a composite construction based on these, with topographical features artfully maneuvered into position, such as Leadenhall where the rainbow ends and the church of St Thomas to the left, neither of which are visible from this viewpoint.

Yet for all its contrivances, the painting still retains an extraordinary sense of vitality, more so than the Frick painting, for example, with its meticulously observed topography and those picturesque recessional markers such as the framing foliage or the three neatly placed cows. In Salisbury Cathedral from the Meadow the viewer is instead guided sinuously backwards and forwards in the picture space through a stimulating interplay of line and curve.

Up close Constable’s painterly method is even more impressive. Using palette knife and brush, the effects are truly breathtaking. Indeed, few artists have shown such an extraordinary facility for capturing the textures of the natural world.

“I mean more than the rainbow itself”

It is the rainbow though that captivates, the first in any of Constable’s paintings. It came as an afterthought, as x-rays of the painting show. But what an afterthought! In one masterstroke Constable negotiates a multitude of difficulties. Compositionally it unites the various elements of the painting, softening the horizon and creating rich echoes with the curve of the river and the undulating line of the large tree to the right that is carried through the cart and horses.

But that is not all. In 1834 he gave a series of lectures on the history of landscape painting. Alluding to rainbows painted by the Baroque artist Peter Paul Rubens, he stated: “I mean more than the rainbow itself, I mean dewy light and freshness, the departing shower, with the exhilaration of the returning sun.” The rainbow then generates feelings of “freshness” and “exhilaration”, as well as capturing that ceaseless mutability of the forces of nature, that like the tide, depart and return.

That the base of the rainbow is situated at Leadenhall where John Fisher lived and Constable had stayed, reveals also something of its personal significance, made all the more poignant in that a year after the painting was exhibited Fisher died at the age of forty-four.

Lastly, one senses that with the rainbow bounding the cathedral as boldly as it does, Constable invites us to consider traditional Christian iconography. The storm has passed and whatever it may stand for: the Papist (Catholic) threat to the Church of England, the artist’s own religious uncertainty or, as many have argued, his deep sense of desolation at the loss of his wife, the rainbow that marks its passing carries with it more benign associations: God’s pardon and reconciliation with man (as in after the Flood) or the promise of peace after the storm of life (as in the Resurrection).

If for Turner the sun was god, for Constable it was the sky; a sort of sustained autobiography written in the clouds. They are also beautifully observed. As for the rainbow, containing the colors of the spectrum in a single stroke, what better summation of Constable’s powers as an artist, the ultimate painterly gesture, conveying the fullest expression of the compass of his art?

A Preliminary Sketch of Salisbury Cathedral from the Meadows in the Tate Britain, London

Short biography of the artist from The National Gallery, London

Cite this page as: Ben Pollitt, "John Constable, Salisbury Cathedral from the Meadows," in Smarthistory, August 9, 2015, accessed May 28, 2022, https://smarthistory.org/constable-salisbury-cathedral-from-the-meadows/.