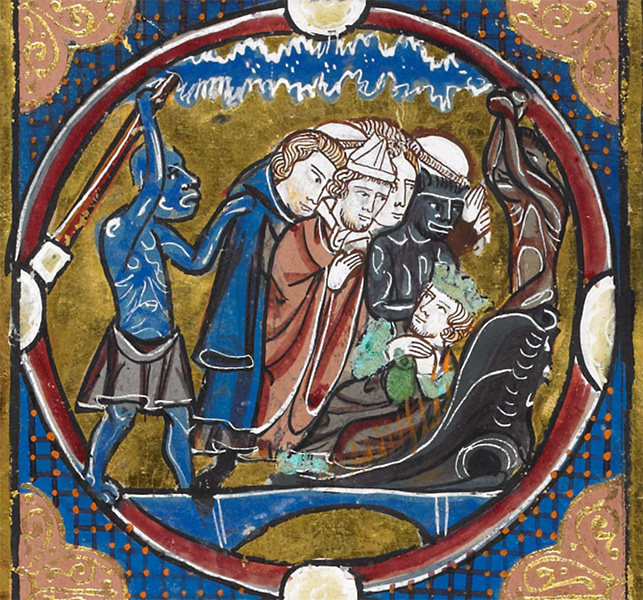 One book, thousands of illustrations

Imagine a children’s illustrated bible. There might be 2-3 illustrations for each story: Adam and Eve in the garden, Noah’s ark, Daniel in the lion’s den, and others. If you open a regular copy of the bible, each of these stories are covered in several pages of densely-written ancient text. Now imagine that you had a book that contained a separate illustration for every few sentences in the entire bible. Imagine that this super illustrated bible also contained another text that interpreted the bible text and that your book also contained illustrations of that additional text. One book: thousands of illustrations. It is medievally mind-blowing.
The Bible moralisée, or moralized bibles, are a small group of illustrated bibles that were made in thirteenth-century France and Spain. These books are among the most expensive medieval manuscripts ever made because they contain an unusually large number of illustrations. These books were generally commissioned by members of royal families, as no one else would have been able to afford such luxury. Below is a dedication page showing the owners of one Bible moralisée: Blanche of Castile and King Louis IX of France. 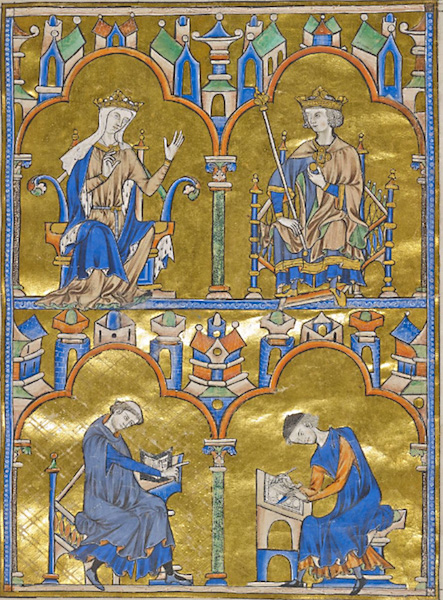 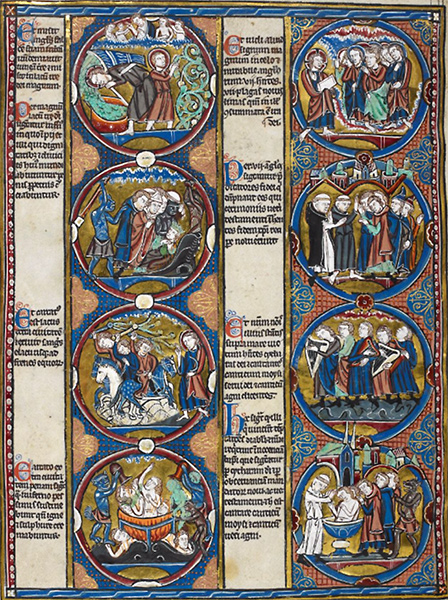 The example presented here is from the Paris-Oxford-London Bible moralisée, which is broken up into three volumes in three different cities. This page, or folio, is from the Apocalypse, or Book of Revelation. The text tells the story of John’s vision, where an angel takes him on a tour of heaven and shows him everything that will happen until the end of time, but in symbols. The gist of the story is that there is an ongoing battle between God and evil and ultimately God and his angels win.
In looking at the page, it breaks down into a number of parts and it is important to identify each part in order to understand how the texts and images work together. The Latin text in the upper left is from Revelation 14:19, which translates as

“And the angel thrust in his sharp sickle into the earth, and gathered the vineyard of the earth, and cast it into the great press of the wrath of God:” (Douay-Rheims translation) 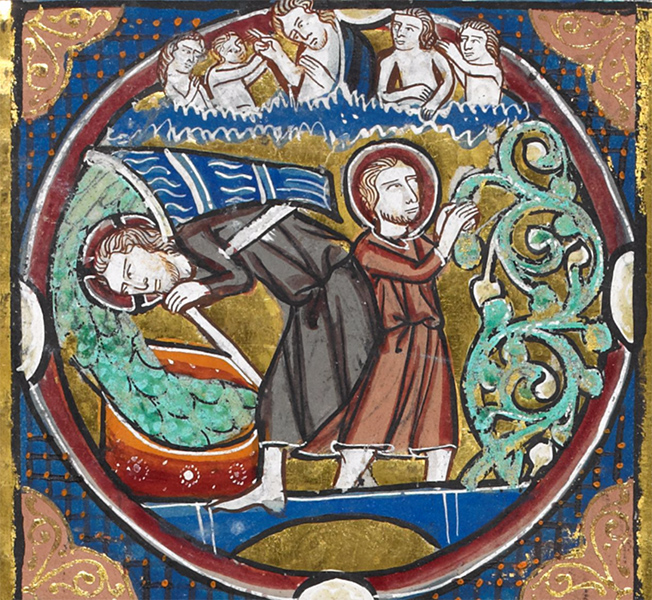 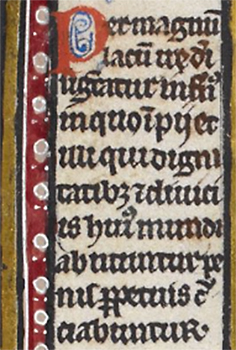 The illustration is a visual interpretation of this text, with some extra details added. A figure on the right harvests grapes from the vines on the right and Christ, with his cruciform (cross-shaped) halo, pours the grapes from the basket on his back into the winepress. God and his angels bless the scene from above. 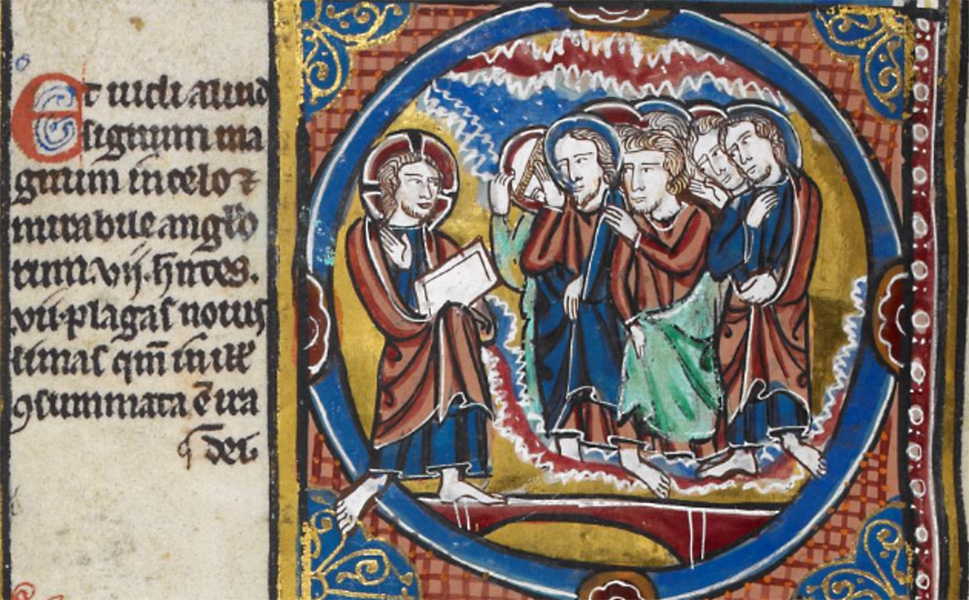 The upper portion of text comes from Revelation 15:1, which translates as

“And I saw another sign in heaven, great and wonderful: seven angels having the seven last plagues. For in them is filled up the wrath of God.” (Douay-Rheims translation)

The accompanying illustration shows Christ on the left and seven angels on the right. The commentary beginning with the blue letter “P”, interprets the seven angels as faithful preachers who teach God’s people. The illustration shows priests on the left teaching a group of men (below). The illustrator goes further and adds two Jewish men on the right, identified by their conical hats. The faithful priests are contrasted with the Jewish men who literally turn their bodies away from the priests. Illustrations like this tried to convince Christian readers that although Jews were once God’s people, as outlined in the Hebrew Bible/Old Testament, that medieval Jews had turned away from that role. This kind of anti-semitic message promoted hate and violence toward Jews in the later Middle Ages. 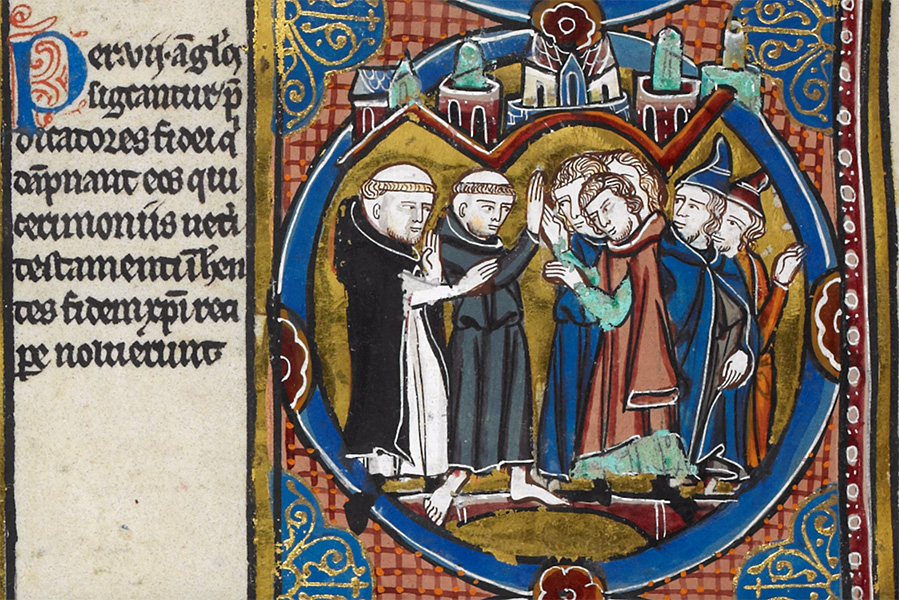 Zoomable image of Scenes from the Apocalypse, from the British Library

The Devil is in the Detail: A Thirteenth-Century Bible Moralisée—blog post from the British Library

Blanche of Castile and King Louis IX of France; Author Dictating to a Scribe, Moralized Bible at The Morgan Library & Museum