The largest church in Christendom

The abbey of Cluny III (located in Southern Burgundy, France) started modestly enough—the first church being a relatively simple barn like structure. However, Cluny quickly grew to be home to the largest church in Christendom—a title it would hold for over 200 years. But first things first, what exactly is an abbey? An abbey can refer to a Christian church, but the term generally goes beyond that to refer to the grouping of buildings that constitutes the housing and other necessary buildings for a society of Christian monks or nuns who were all living under a specific religious rule (the rule regulated their lives, specifying behavior and the organization of the monastery). In the case of Cluny, the rule the monks lived under was that of Saint Benedict of Nursia, who had, in the 6th century, advocated a life divided between prayer, rest, study, and work. A gift from William I, Duke of Aquitaine

The site of abbey originally belonged to William I, Duke of Aquitaine and was home to his favorite hunting box (a hunting lodge for use during the hunting season). In the Middle Ages, a duke (the highest ranking member of the nobility) often wielded much more power and authority than a king (this was in part because the dukes held sway over the provinces, and power was decentralized). Dukes were often wealthier than the king (as the Très Riches Heures of the Duke of Berry demonstrates). While a hunting box may conjure up visions of a one-room cabin, likely it was a large and stately home in its own right—so when, toward the end of his life, William I gave up the home, lands, and hunting rights (and several other parcels of land as well), so that charitable institutions could be built, it was a significant donation. The land that would become Cluny was placed into the hands of a venerable monk named Berno, who would become Saint Berno of Cluny.

Berno was the abbot of the newly founded Cluny from 910 to 925. The monastery was created to be a reform order that strictly adhered to the Rule of Saint Benedict.* Cluny sought to reform monastic life by returning to the Western monastic traditions of previous centuries which focused on peace, solitude, prayer, and work (such as caring for the poor). Importantly, William I of Acquataine (sometimes referred to as William the Pious), endowed the abbey with something more than land—he gave it independence. As a result, the abbey answered directly to the pope and did not have to obey any other dictates, or taxation, from local lords. This would help Cluny to become a wealthy center of the arts. The first abbey at Cluny (Cluny I, which no longer exists aside from archaeological remains) developed quickly—becoming akin to small town, boasting over 200 monks. It was laid out in the style of the Saint Gall Plan—a large-scale architectural drawing of the “ideal” abbey that was created in Switzerland around 800 C.E. (above and annotated plan here). To our knowledge, no such abbey ever actually existed, but many abbeys appear to have been modeled on the plan—Cluny being one of them. The cloister (a quadrangular walkway where monks would stroll in meditation), is generally regarded as the spiritual center of an abbey. The Saint Gall plan places it literally in the center, and the other buildings, for example, workshops, domestic quarters, etc., surround it. Plan of Cluny II annotated and adapted from Kenneth John Conant, “A History of Romanesque Cluny as Clarified by Excavation and Comparisons,” Momentum, vol. 7 (1971)

As mentioned, the first church at Cluny was likely not much more than a simple place of worship. However, as the order prospered, something larger and more illustrious was called for. Soon after the passing of Berno, a monk named Odo took over as his successor and continued to expand the abbey. The second incarnation of the church at Cluny (Cluny II) was begun just decades after the first.

What we know of it is largely speculative—based on written records and excavations. This second iteration (plan, left) sported a narthex (an enclosed area at the entrance of a church) with two towers in the west, a choir (the area between the main body of church and the altar) with a tower and chapels in the east, in addition to the main basilica form (a basilica is a church plan consisting of a rectangular space, often divided into the central area, or nave, with aisles on either side). The choir had chapels in echelon, or stepped out one after the other—one of the first examples of an architectural form that would become extremely popular. It also had a projecting transept (which cuts perpendicularly across the main body of the basilica). Vaulting in the nave of Saint Philibert, 10th and 11th century, Tournus, France

The church consisted of an illuminated barrel vault, not unlike that still in existence at Saint Philibert at Tournus, Cluny’s neighbor (above). That abbey, and a few others in Burgundy, had been experimenting with the barrel vault. It is good to remember that the work of these builders was largely trial and error. From what we are given to understand, this was very much in keeping with the Romanesque style of the region. As Cluny I and II no longer exist, much of what we have to go on comes from extensive excavation studies—particularly those done by Kenneth Conant.

Romanesque architecture is known for its regional styles—the look and feel of Romanesque churches could vary widely from region to region. Burgundy and the pilgrimage churches were particularly important influences on the style that would develop into Gothic. Gothic architecture began to take on a more “International,” style, sharing characteristics from region to region where Romanesque churches varied largely depending on their location and the local building practices. The only thing that almost all Romanesque churches shared was the use of the rounded stone barrel vault. The nature of a barrel vault, which exerts continual lateral pressure, is not conducive to piercing the supporting walls with windows, so barrel vaulted structures tend to be poorly lit. At Tournus—and likely Cluny II—the builders tried to circumvent this by placing small windows above the arcade. This was the first example of an illuminated vaulted church. Cluny had a series of strong abbots, and Hugh of Semur was one of that line. He waited until he had been in that position for 40 years before beginning construction on the monumental project that would be Cluny III. It is thought he was intent on observing the latest trends—seeing what worked and what didn’t—before embarking on this great building project. Cluny III seems to have been built with the idea of plucking the best attributes from what had been created before and synthesizing them into a grandiose structure worthy of the prestigious order. It was not completed until 1130 (Hugh the Great died in 1109,) and when it was complete it stood as the largest in Europe—with five aisles (rivalling Old Saint Peter’s in Rome). The structure was built from a combination of brick and ashlar (stone) which had hitherto been part of two separate traditions. In many ways, the church laid out was the same as its popular Pilgrimage Route cousins. In addition to the spacious basilica with five aisles, it had two transepts, an ambulatory, and radiating chapels at the east end. The crossings were surmounted by octagonal towers (above) with additional towers over the transept arms. Only a singular transept arm still survives today (top of page). Plan and elevation of the church of the abbey of Cluny III (Burgundy, France) from an engraving of 1754

While only the foundation and some other bits and pieces remain, scholars have reconstructed what the interior would have looked like as well (below). Composed of a three story elevation consisting of slim aisles with pointed arches, blind arcade with three arches in each bay and a triple clerestory, it would have been a sight to behold. The slightly pointed dome rose to a height of 98 feet. This vaunting ambition may have helped lead to the partial collapse in 1125—though quickly repaired by the time consecration took place in 1130. In many ways Cluny III followed, at least in plan, that of a colossal pilgrimage church and there are those who speculate that in fact Cluny was intent upon trying to compete with those medieval moneymakers. The abbey was in fact paid for in large part by money seized from Spanish Muslims who had been conquered by their Christian counterparts.

While William would help found many other monasteries, none would be so prosperous as Cluny. At its height Cluniac congregations numbered at over 1000. Berno was actually given the power to be the abbot of many abbeys, not just Cluny, and his successor, Odo, also began to gather more abbeys under Cluny’s rule. As one might imagine, this idea was not popular given these other abbeys were used to their own systems of rule. But the situation did help expand Cluny into the powerful institution it would become; it would be from Cluny that a number of Popes would be plucked. However, despite the Cluniac movement being a reform movement itself, by late 11th century another breakaway group had formed—the Cistercian movement and, like Cluny, it would be highly successful (see article on Fontenay.) At the time of the Cistercian schism, the Cluniac order was suffering from corruption and excess (too much interest in things of the material world). A far cry from its devout beginnings! *The foundation of the physical church of Cluny was the beginning of the Cluniac, or Benedictine Reforms. Theoretically, all Roman Catholic monks were meant to follow three simple rules set out hundreds of years earlier by Saint Benedict of Nursia. Essentially these precepts could be boiled down to peace, prayer and work. Cluniac monks also observed the traditional eight Benedictine hours of the Divine office: Matins, Lauds, Prime, Terce, Sext, None, Vespers, and Compline. Some of the most delightful (and still intact), artwork of Cluny III are the capitals representing the tones of the Gregorian chant, or plainsong. Rescued from the rubble of the choir, these marvelous sculptures show tones of the chant personified as small figures standing in their concave almond-shaped mandorlas. Some of the figures are playing instruments, some seem to be contorted into movements of a dance. 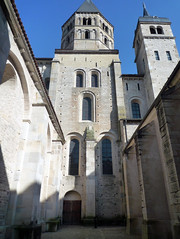 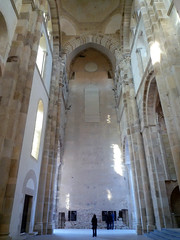 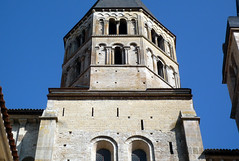 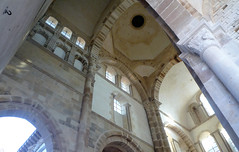 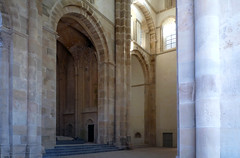 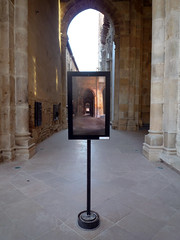