The first international style since antiquity

The term “Romanesque,” meaning in the manner of the Romans, was first coined in the early nineteenth century. Today it is used to refer to the period of European art from the second half of the eleventh century throughout the twelfth (with the exception of the region around Paris where the Gothic style emerged in the mid-twelfth century). In certain regions, such as central Italy, the Romanesque continued to survive into the thirteenth century. The Romanesque is the first international style in Western Europe since antiquity—extending across the Mediterranean and as far north as Scandinavia. The transmission of ideas was facilitated by increased travel along the pilgrimage routes to shrines such as Santiago de Compostela in Spain (a pilgrimage is a journey to a sacred place) or as a consequence of the crusades which passed through the territories of the Byzantine empire. There are, however, distinctive regional variants—Tuscan Romanesque art (in Italy) for example is very different from that produced in northern Europe. The relation of art to architecture—especially church architecture—is fundamental in this period. For example, wall-paintings may follow the curvature of the apse of a church as in the apse wall-painting from the church of Sant Climent in Taüll (also known as Saint Clement), and the most important art form to emerge at this period was architectural sculpture—with sculpture used to decorate churches built of stone. Many sculptors may have begun their career as stone masons, and there is a remarkable coherence between architecture and sculpture in churches at this period. The two most important sculptural forms to emerge at this time were the tympanum (the lunette-shaped space above the entrance to a church), and the historiated capital (a capital incorporating a narrative element usually an episode from the Bible or the life of a saint). One of the most famous tympanums is on the west entrance to Autun Cathedral which represents—appropriately for this part of the church—the Last Judgment. An inscription (Gislebertus hoc fecit” “Gislebertus made me”), at the base of the giant immobile figure of Christ at the center, records the name of the artist or head of the workshop which produced it, though it has been suggested that it may refer to the original patron who was responsible for bringing the relics of Lazurus to Autun in the Carolingian period.

The influence of ancient Rome One influence on the Romanesque is, as the name implies, ancient Roman art—especially sculpture—which survived in large quantities particularly in southern Europe. This can be seen, for example, in a marble relief representing the calling of St. Peter and St. Andrew from the front frieze of the abbey church of Sant Pere de Rodes on the Catalonian coast. The imprint of the antique can be seen in the deep undercutting in the drapery folds, an effect achieved by the Roman device of the drill, and the individualization of the faces.

Classical influence was also frequently mediated through an intermediary—most importantly Byzantine art (especially textiles and painting), but also through earlier medieval styles which had absorbed elements of the classical tradition such as Ottonian art. The illustrations in The Bury Bible have, for example, been convincingly compared to Byzantine wall-paintings in a church at Asinou in Cyprus which suggests that its artist—a certain Master Hugo (having the name of the artist is unusual during this period) had seen them or a similar source. Monasteries such as that of Bury St. Edmunds in East Anglia in England (where the Bury Bible was made) were important centers of production—especially for the writing and decorating of manuscripts. The Bury Bible is a good example of the remarkable achievements of monastic scriptoria in the Romanesque period.

Monasteries were not the only centers of production. Romanesque art is also associated with towns that were revived and expanded during this period—for the first time since the fall of the Roman empire—a consequence of broad economic expansion (examples include Assisi in Umbria with its Romanesque cathedral or the newly founded town of Puente La Reina in northern Spain on the pilgrimage route to Santiago de Compostela). Romanesque art is for the most part religious in its imagery, but this is partly a matter of what has survived, and there are examples of secular art from the period. Unusual is a casket in The British Museum, a product of Limoges craftsmanship, which is made of wood with champlevé enamels attached to it (produced by heating powdered glass set into groves hollowed out of bronze plate). This is decorated with scenes to do with courtly love inspired by troubadour poets from Provence. The distinction between the fine and decorative arts is one that emerges only in the Renaissance and does not apply at this earlier period. If anything the most highly valued works of art during the Romanesque period were objects of metalwork made from precious metals that were frequently produced to house relics (characteristically the body part of a saint, or—in the case of Christ who, the faithful believe ascended to heaven—objects associated with him such as fragments of the so-called true cross on which Christ was thought to have been crucified).

An example of this is the reliquary known as the Stavelot Triptych. It consists of a central panel flanked by side wings that can be closed, a design format derived from Byzantine art but made at the Benedictine monastery of Stavelot in the Mosan region in present day Belgium in the mid-twelfth century. The triptych was commissioned by the abbot, a man called Wibald, whom we know travelled extensively and who acquired, during a trip to Constantinople, the two Byzantine enamel plaques incorporated into the center of the triptych that contain what were believed to be fragments of the true cross. A wall painting from San Clemente in Catalonia

The apse wall-painting from the church of San Clemente is a good example of the Romanesque style. The church is situated in a remote valley in northern Catalonia (north-east Spain today) and is typical of the handsome stone-built churches which sprung up in this region in the Romanesque period. The painting would have been painted onto fresh plaster applied to the walls of the church (it was transferred for safekeeping to the Museum of Catalan Art in Barcelona early in the twentieth century). The painting is dominated by the giant figure of Christ in a mandorla (a halo around the body of a sacred person), represented as he will appear at the end of time as described in the Book of Revelation. Christ is represented characteristically out of scale to the other figures to indicate his status. His head is distorted, elongated and highly geometric, and he has piercing hypnotic eyes. To either side of him are written the Greek letters “alpha” and “omega” (the beginning and the end), and with one hand he gestures in blessing, while the other holds an open book with the words Ego sum lux mundi (I am the light of the world) inscribed on it. Below him is an equally elongated and distorted figure of the Virgin Mary who holds a chalice with Christ’s blood, a representation of the Holy Grail which predates the earliest written description of the subject. Her presence in the scheme is symptomatic of the growing cult of the Virgin Mary at this period.

It would be just as much a mistake to regard the lack of naturalism found in this painting as indicating lack of artistic competence as it would be in a work by Picasso. Rather it indicates that its artist (whose real name we do not know) is not interested in replicating external appearances but rather in conveying a sense of the sacred and communicating the religious teachings of the church. Picasso (who was brought up in Barcelona) greatly admired Catalonian Romanesque, and it is significant that later in his life he kept a poster of this painting in his studio in southern France. We live in a world saturated with images but in the Romanesque period people would rarely encounter them and an image such as this would have made an immense impression.

Romanesque art on The Metropolitan Museum of Art’s Heilbrunn Timeline of Art History.

Romanesque art at the National Museum of Catalan art (video). 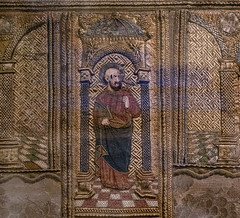 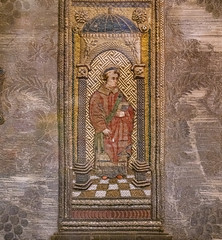 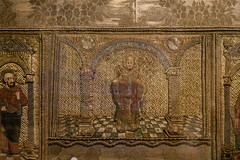 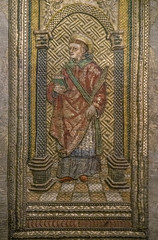 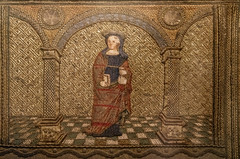 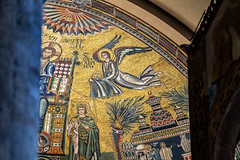 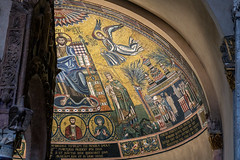 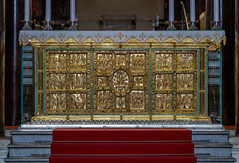 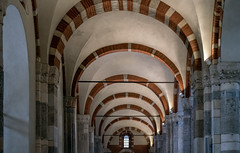