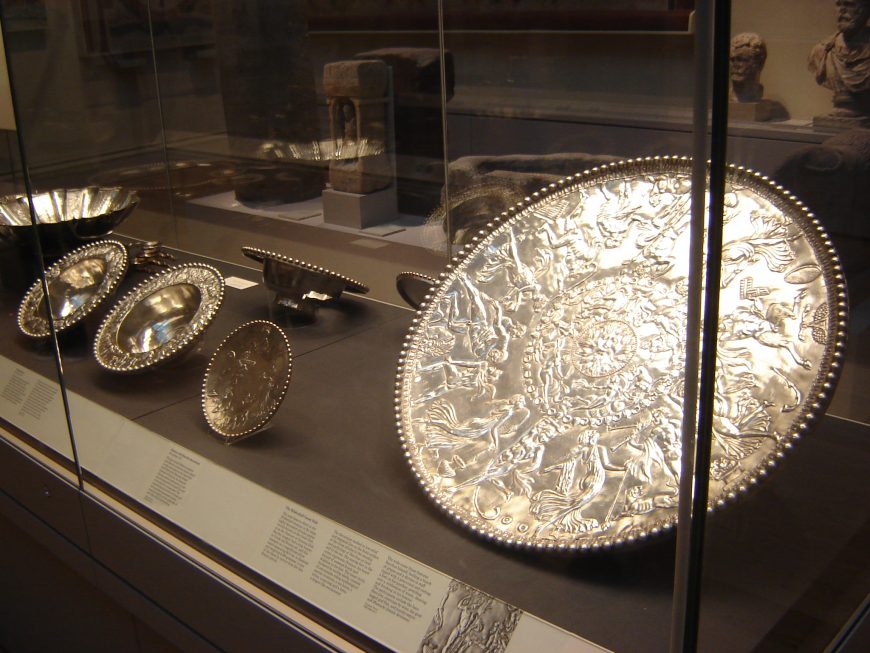 In 1942 a farmer plowing a field in the East of England unearthed a substantial hoard of Roman silver dating from the fourth century, C.E. This became known as the “Mildenhall Treasure,” named for the nearby town. Its original owner may have buried his collection of banqueting vessels when the Roman administration left England in 410 C.E., hoping that he could later retrieve it. Among the spoons, bowls, dishes, and ladles is a two-foot wide silver platter weighing almost eighteen pounds, with classical motifs borrowed from antiquity (ancient Greece and Rome). However, though the platter depicts the gods Neptune and Bacchus, the owner was likely a follower of Christianity—a newly-sanctioned religion that was not yet the dominant belief system in Europe. This confluence of classical and Christian concepts is typical of the early middle ages. Because of the political and social upheavals happening in Europe at this time, the art of this period comprises a wide range of styles and themes that often blend classical elements with new and different ones.

The transition between antiquity and the Middle Ages is often perceived as having been marked by a sharp break in beliefs and artistic style. This change was, in the past, characterized by scholars as a “decline.” According to this narrative, the chaotic and unstable atmosphere of the Roman Empire in the later third century led many of its inhabitants to embrace new, minority religions imported from the empire’s edges. Some of these were messianic religions that promised members  an afterlife more pleasant than their current, increasingly difficult existences. At the same time, the economic struggles of the Late Roman Empire undermined investment in the artists’ workshops where the naturalism of classical Roman art had been taught to generations of artists. Lacking the traditional training, means, and patrons who valued classicism, artists during this period often worked in a more static, two-dimensional style that emphasized ideas and symbols over naturalistic illusionism. The abandonment of naturalistic style also coincided, it seemed, with the rise of a new majority religion, Christianity, that rejected materiality and traditional forms of beauty in favor of simplicity and self-denial.

Two stone reliefs installed on the Arch of Constantine demonstrate this supposed “decline.” The reused roundel with a sacrifice to Apollo (left) originally carved for a monument to the Emperor Trajan between 117 and 138 (when the Roman empire was more stable), displays many key characteristics of classicism: varied depth of relief, carefully delineated drapery folds, and figures shifting in space. By contrast, in the panel depicting the emperor distributing largesse (right), commissioned in the Late Empire between 312 and 315, the figures seem almost comically disproportionate, with enormous heads and hands, and draperies indicated by drilled lines. The problem with the idea of a “decline” is that it ignores the many, often contradictory, currents of art and experience that existed in the late antique world. Romans had long sought to incorporate newly conquered and colonized populations by appropriating local religious beliefs and artistic traditions, in the process creating new, localized versions of Roman art that were sometimes less naturalistic. Even artists working in the capital, Rome, could choose to employ either naturalism or a more symbolic visual shorthand, depending on who made the art and who consumed it—as in the Amiternum Tomb (above), which was made during the first century, when classicism was the most prominent style. Instead of displaying a classical attention to composition, the artist has arrayed stocky figures of a variety of sizes in a seemingly haphazard way—going against the current artistic trends of the day.

If works like the Amiternum Tomb help complicate the idea of an artistic decline, do they perhaps simply demonstrate variances in artists’ and patrons’ tastes? Some have argued that Emperor Constantine (who decriminalized Christianity in Rome in the early fourth century), and by extension the increasingly Christian populace, were, because of their beliefs, drawn to a non-classical style that denied naturalism in favor of a more symbolic set of forms. But surviving artworks commissioned by wealthy Romans show that, like their pagan peers, many Christians often still preferred a classicizing style—even if the subjects portrayed were new. For instance, in the middle of the fourth century the body of Junius Bassus, a Roman prefect (high official), was buried in an elaborate marble sarcophagus. Plaster cast of the Sarcophagus of Junius Bassus, the original marble sarcophagus dates to 359 C.E. and is located in the Treasury, St. Peter’s Basilica, Vatican City.

Since he was a Christian convert, Junius’s sarcophagus was covered with narrative and symbolic scenes from the Christian bible, all rendered in a classicizing style. The standing apostles are wrapped in Roman togas and the youthful Christ sits on an animal-headed and -footed seat. Unlike most classical works, here the hands and heads of the figures are a little too large, but the artist was clearly attempting to employ the stylistic language of classicism to transmit Christian content.

These aesthetic departures from strict classicism were not limited to Christian-sponsored art: the same tendencies are apparent in objects that were commissioned by avowed pagans around the same time. This ivory panel was commissioned to celebrate a marriage between members of two Roman patrician (noble) families, the Nicomachi and Symmachi. A female figure with an oversized head and hands stands next to an altar, while a comparatively tiny servant stands behind it. The woman’s back leg projects in front of the surrounding frame, while her front leg, counterintuitively, stands on the ground within it, breaking the rules of naturalism. Based on the artworks that survive, we know that both pagan and Christian patrons found these kinds of contradictions in space and proportion acceptable.

A hoard of silver

There were also a diversity of themes preferred amongst patrons of different religions. Artworks from this time sometimes combine overtly pagan content with classicizing style, but for use by Christians. The so-called “Great Dish” found in the Mildenhall treasure is a shining example of such artistic combinations. Concentric rings of repoussé and engraved decoration celebrate the classical themes of the ocean and Bacchic revelry. The hair and beard of the Roman god Neptune in the center of the dish radiate dolphins and seaweed. Around him nymphs ride sea creatures. In the outer band Bacchus (the god of wine), Hercules, Pan and throngs of satyrs and maenads holding Bacchic thistle-headed staffs and a shepherd’s crook twist and turn, draperies swirling, dancing with wine-induced abandon. While this dish’s classicizing style and subject matter are undeniable, we known that its owner was likely Christian, as spoons from his dinnerware set (below) include the Christian symbols of the Chi-Rho and Alpha and Omega. Despite his Christianity, the owner likely felt perfectly comfortable displaying the platter with its exuberant dancing nudes on his sideboard for the admiration of his guests.

Rather than demonstrating a “decline” or a sharp break in artistic themes and styles, Roman artworks of the early middle ages display as much diversity and blending as the empire itself. The Mildenhall Treasure Project at the British Museum

The Mildenhall Great Dish at the British Museum

The Symmachi Panel at the Victoria and Albert Museum