This extraordinary helmet is very rare. Only four complete helmets are known from Anglo-Saxon England: at Sutton Hoo, Benty Grange, Wollaston and York.

Archaeologists discovered this helmet lying in the tomb. It was an amazing, rare find. It was also very unusual because it had a face-mask. Look at the nose, eyebrows and holes for the warrior’s eyes. Can you see a dragon with outstretched wings, made up by the two bushy eyebrows, nose and mustache? Replica of the helmet made by the Royal Armories (The British Museum) (photo: Steven Zucker, CC BY-NC-SA 2.0)

When found, the magnificent helmet from the Anglo-Saxon grave at Sutton Hoo, Suffolk, was in hundreds of pieces. The burial chamber had collapsed and reduced the helmet to a pile of fragments. Pieces of rusted iron were mixed up with pieces of tinned bronze, all so corroded as to be barely recognizable. By precisely locating the remaining fragments and assembling them as if in a three-dimensional jigsaw puzzle, conservators have reconstructed the helmet. A complete replica made by the Royal Armories shows how the original would have looked. Replica of the helmet made by the Royal Armories (detail) (The British Museum) (photo: Steven Zucker, CC BY-NC-SA 2.0)

The helmet comprised an iron cap, neck guard, cheek pieces and face mask. Its form derives from Late Roman cavalry helmets. The helmet’s surfaces were covered with tinned copper alloy panels that gave it a bright, silvery appearance. Many of these panels were decorated with interlacing animal ornament (“Style II”) and heroic scenes of warriors. One scene shows two men wearing horned head-gear, holding swords and spears. The other shows a mounted warrior trampling a fallen enemy, who in turn stabs the horse. The rider carries a spear which is supported by a curious small figure, standing on the rump of his horse – perhaps a supernatural helper. Similar scenes were popular in the Germanic world at this time. The face-mask is the helmet’s most remarkable feature. It works as a visual puzzle, with two possible “solutions.” The first is of a human face, comprising eye-sockets, eyebrows, mustache, mouth and a nose with two small holes so that the wearer could breathe. The copper alloy eyebrows are inlaid with silver wire and tiny garnets. Each ends in a gilded boar’s head – a symbol of strength and courage appropriate for a warrior. The second “solution” is of a bird or dragon flying upwards. Its tail is formed by the mustache, its body by the nose, and its wings by the eyebrows. Its head extends from between the wings, and lays nose-to-nose with another animal head at the end of a low iron crest that runs over the helmet’s cap. 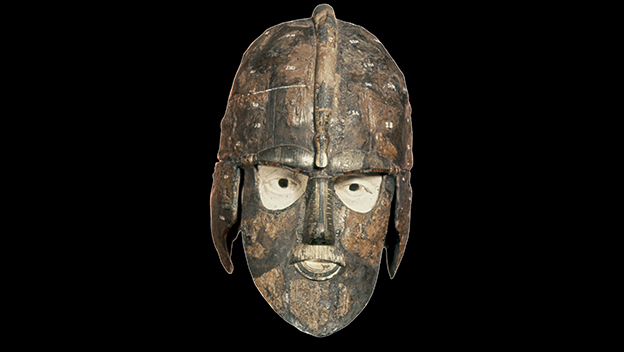 The first restoration of the helmet (above) was completed by 1947, but continuing research showed it to be inaccurate and it was dismantled in 1968. The new restoration relied entirely on the evidence of the fragments themselves and not on preconceived ideas – the aim of all modern archaeological conservation. It took the conservator a year of painstaking study and experimentation with more than 500 fragments.

The pieces had to be identified and matched by their thickness, texture and traces of the design in the corrosion. As months passed, vital discoveries were made about the helmet’s structure. The cap size and shape were established by joining fragments from the top and one of the sides; a small riveted plate on one piece provided evidence for the attachment of the ear-flaps. The discovery of the position of a third dragon’s head completed the dramatic face mask.

A temporary support was made (a plaster dome covered with modeling clay) on which the fragments were held with long pins while they were joined. The missing areas were filled with jute textile, stiffened with adhesive and skimmed with plaster. These infills were colored brown to match the iron.

Though rusted now, the helmet would originally have been a bright silvery color. The tinned bronze panels, the gilding and the garnets would have given it original, the striking appearance we see in the reconstruction.

A precious survival, the Sutton Hoo helmet has become an icon of the early medieval period.

Sutton Hoo at the British Museum