Books love to hide from us. While you were sure you put your current read on the kitchen table, it turns up next to your comfortable chair in the living room. As you handle more books at the same time, it becomes increasingly challenging to keep track of their location. In the Middle Ages it was even more difficult to locate a specific book. Unlike today, medieval books lacked a standard size, so you couldn’t really make neat piles—which brings a bit of order to chaos. Finding a book was also made difficult by the fact that the spine title had not yet been invented.

So how did medieval readers locate books, especially when they owned a lot of them? The answer lies in a neat trick that resembles our modern GPS : a book was tagged with a unique identifier (a shelfmark) that was entered into a searchable database (a library catalogue), which could subsequently be consulted with a handheld device (a portable version of the catalogue). Here is how to plot the route to a specific book in the medieval library. 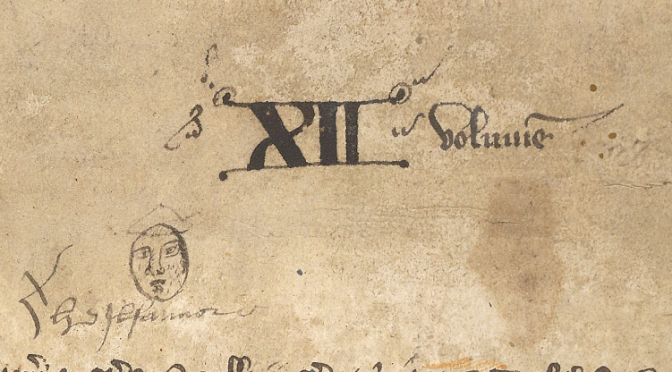 The most effective tool for retrieving a book in medieval times was to give it a number and placing it in the correct sequential order on the shelf. It is still common practice in modern libraries, for good reason: as long as the shelver puts the object back in the right spot, you will be able to find it again quickly. Such book numbers—shelfmarks—come in various forms. The more books a library owned, the more complex the shelfmarks had to become. The most simple type merely stated that the book in question was the “twelfth volume” in the cupboard (image above). 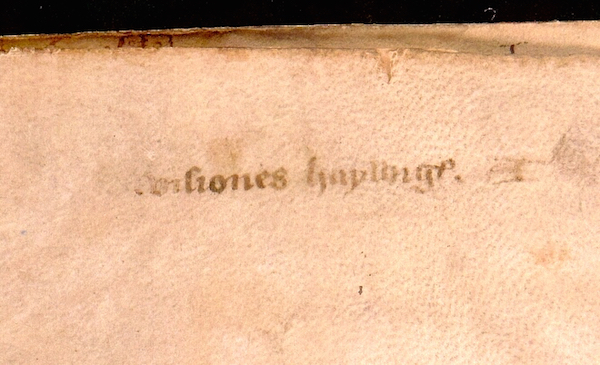 Similarly, in small collections books were marked with single letters. In Bethlehem Priory near Brussels each item in the small library of Middle Dutch (i.e. non-Latin) books was given a letter, which was placed on an empty page in front of the manuscript together with a short title. The first volume in this mini library was a late-fourteenth-century copy of works by the mystic Hadewijch (above), and on the flyleaf we can still faintly read “Visiones haywigis. A,” showing it was the first book on the shelf. 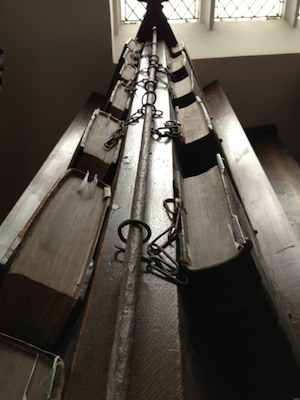 Larger libraries–exceeding 26 books–needed a more sophisticated shelfmark system. A particularly clever one is found in manuscripts that were placed on lecterns, like those used in chained libraries. The shelfmarks had two components: a letter that pointed to the appropriate lectern, and a number that indicated the book’s position on the shelf. Because manuscripts were placed on both sides of the lectern, color was added to distinguish between the sides: red numbers referred to books placed on the right side, black ones to those on the left.

The shelfmark tag on the front cover of Lucan’s Pharsalia (below) (“Q 2″) is a variation on this theme. Here the letter was made red so as to indicate on what side of the lectern the book was to be placed. It shows that the fifteenth-century owner of the book, the Benedictine Abbey of Egmond, near Amsterdam, owned a lectern library. Much like a modern GPS, the tag “(red) Q 2″ ties the manuscript to a unique location: it is the third book on the right side of the sixteenth lectern. 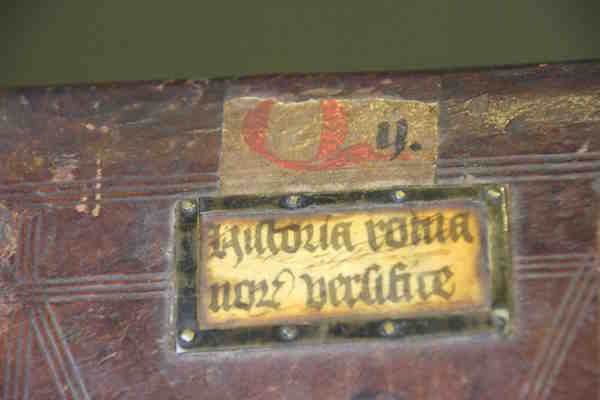 Having a location tag is only useful, of course, if there is a searchable database from which the book’s location may be retrieved. How would you otherwise get to Lucan’s Pharsalia in the library, or even know it is present there? The library catalogue is such a database. Up to 1200 the contents list of a monastic library was usually merely an inventory: it marked the presence of a book, but not its location. The later Middle Ages saw a surge of real catalogues, listing books and their location. Some of these catalogues were written out in books (as we will see in a moment), while others were pasted to the wall in the library. 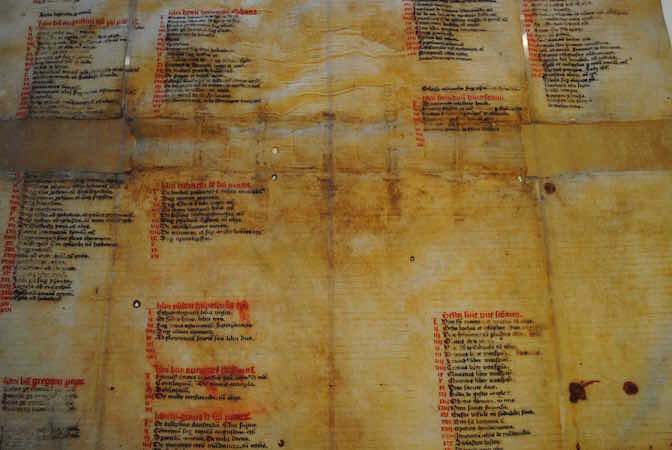 A particularly big wall catalogue survives from Lopsen Abbey near Leiden: it originally measured 800×590 mm (above). The books in this list are numbered sequentially (1, 2, 3, etc.) within categories such as “books read during the meals” (libri refectoriales” ) and “books for personal, spiritual development (libri devoti et utiles). However, there is no clear indication as to where the object may be found (the same in this wall catalogue). Readers had to wander through the library to find the right section and then start counting to find the book they were looking for. Not very efficient.

By contrast, other late-medieval catalogues are very clear about the location of a book. Catalogues survive from several monastic libraries in the Forest of Soignes (just outside of Brussels) that actually refer to the sophisticated type of shelfmark seen in the Leiden University Library example above. The ones from Zevenborren Priory (now Brussels, Koninklijke Bibliotheek, MSS II 1038 and 7602, both early 16th century) refer to books on both the “black side” and the “red side” of the lectern.

The catalogue of the lectern library in another abbey in the forest, nearby Rooklooster Priory, is the cleverest of the lot. It comes in the form of a book with a peculiar shape (now Brussels, Koninklijke Bibliotheek, MS II 152). It is long and narrow—a format that indicates it was made for handheld use, as research has shown. Curiously, the shape of the pages resembles the long inventory slips on the side of book cupboards in chained libraries (see the wooden frames clearly visible in the image below). The hand-held Rooklooster catalogue must have been copied directly from such slips on the side of the lecterns. 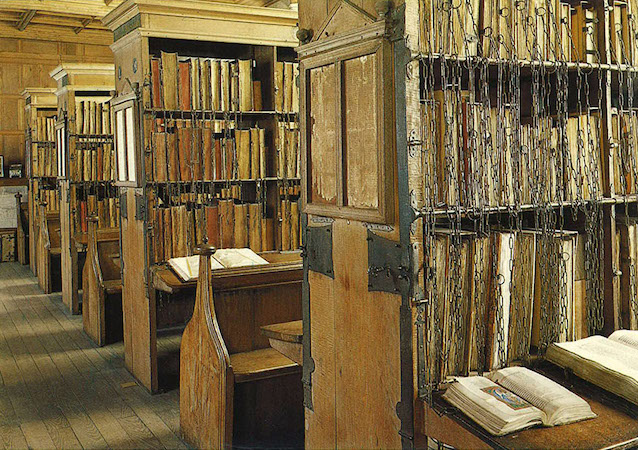 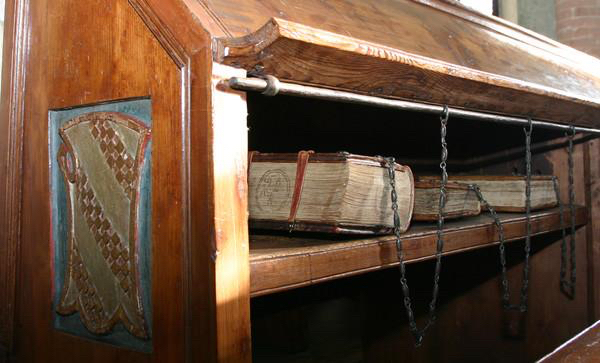 Standing in front of a lectern with his handheld device, the reader knew precisely which of the volumes in front of him was the one he was looking for: he could identify it without even opening it. This particular medieval catalogue is not unlike a modern navigation system, with “GPS coordinates” directing readers to such works as Ambrose on the Psalms (Black A 1) and Augustine’s Civitate Dei (Red A 5). The only difference is that it never ran out of batteries.