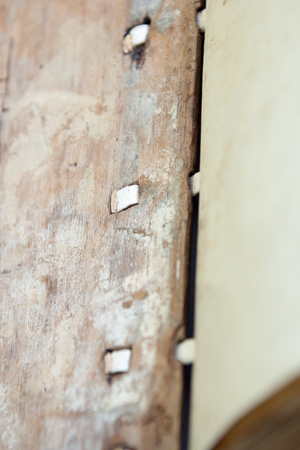 Medieval manuscripts, even small ones, can be surprisingly heavy. Giant Bibles, large volumes that can stand half a meter tall, weigh as much as twenty-five kilos. It requires two library staff members to carry the object to your table. A fair part of this weight is produced by the boards of the bookbinding. To protect the stack of quires that made up the actual manuscript, a wooden board was placed on the front and back. The quires were then tied to thin leather straps, which were pushed through channels drilled through the boards. The straps were pegged into the wood, as seen in the image (note the white straps). It produced a surprisingly firm binding, which lasted for centuries. All this crafty woodwork is presently hidden from our eyes because the boards were subsequently covered with leather (which was often fitted with decoration). Thousands of pieces of medieval trees are presently hidden inside book bindings, like a shelved mini forest. 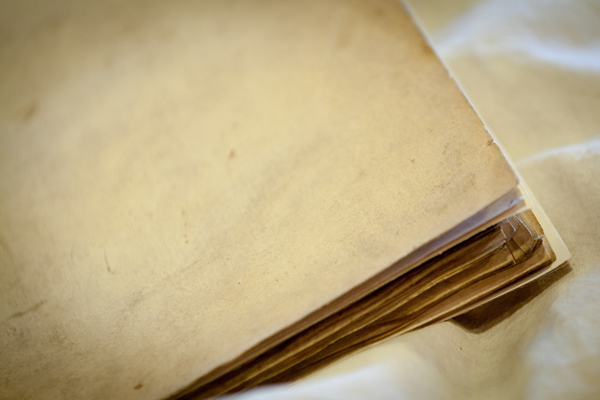 The so-called “limp binding” is another type of binding that was in popular use in medieval times. Its most notable feature is the absence of boards, which explains its name. With a limp binding the quires are covered by a plain parchment wrapper without the support of wooden boards.The quires in these bindings—usually a limited number—are attached to the outer parchment with thin strings, which are visible on the outside. A limp binding resulted in a lighter manuscript, which meant it was easier to transport. This type of binding also decreased the cost, given that wood was not needed and that the binding process was less time-consuming. This is likely why this type of bookbinding was so popular among medieval students. 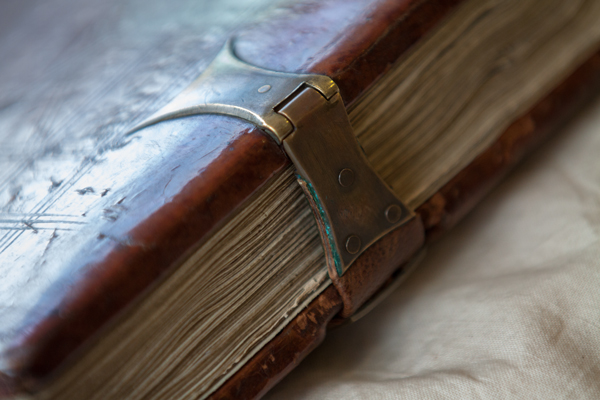 Many medieval books were a joy to look at even when they were closed. Various shiny “accessories” were drilled in and attached to the wooden boards on the outside of the book. The most pronounced of these are the so-called “bosses,” protective metal pieces attached to each corner of the binding. Much more common are clasps, pieces of metal that kept the book closed. These were needed because, unlike paper, parchment has a tendency to expand and buckle, which could push the book open. A clasp was therefore needed to keep the book closed when not in use, protecting the text inside. Also frequently added to the binding is decoration—flower motifs, playful line patterns, and at times even a painted scene. Such decorative elements on the outside of the binding became particularly common near the end of the Middle Ages.