Gold, glass, and marble dazzle the eye in this 6th-century church. High above us, Emperor Justinian presides.

San Vitale is one of the most important surviving examples of Eastern Roman “Byzantine” Empire architecture and mosaic work. It was begun in 526 or 527 under Ostrogothic rule. It was consecrated in 547 and completed soon after. One of the most famous images of political authority from the “middle ages“ is the mosaic of the Emperor Justinian and his court in the sanctuary of the church of San Vitale in Ravenna, Italy. This image is an integral part of a much larger mosaic program in the chancel (the space around the altar). 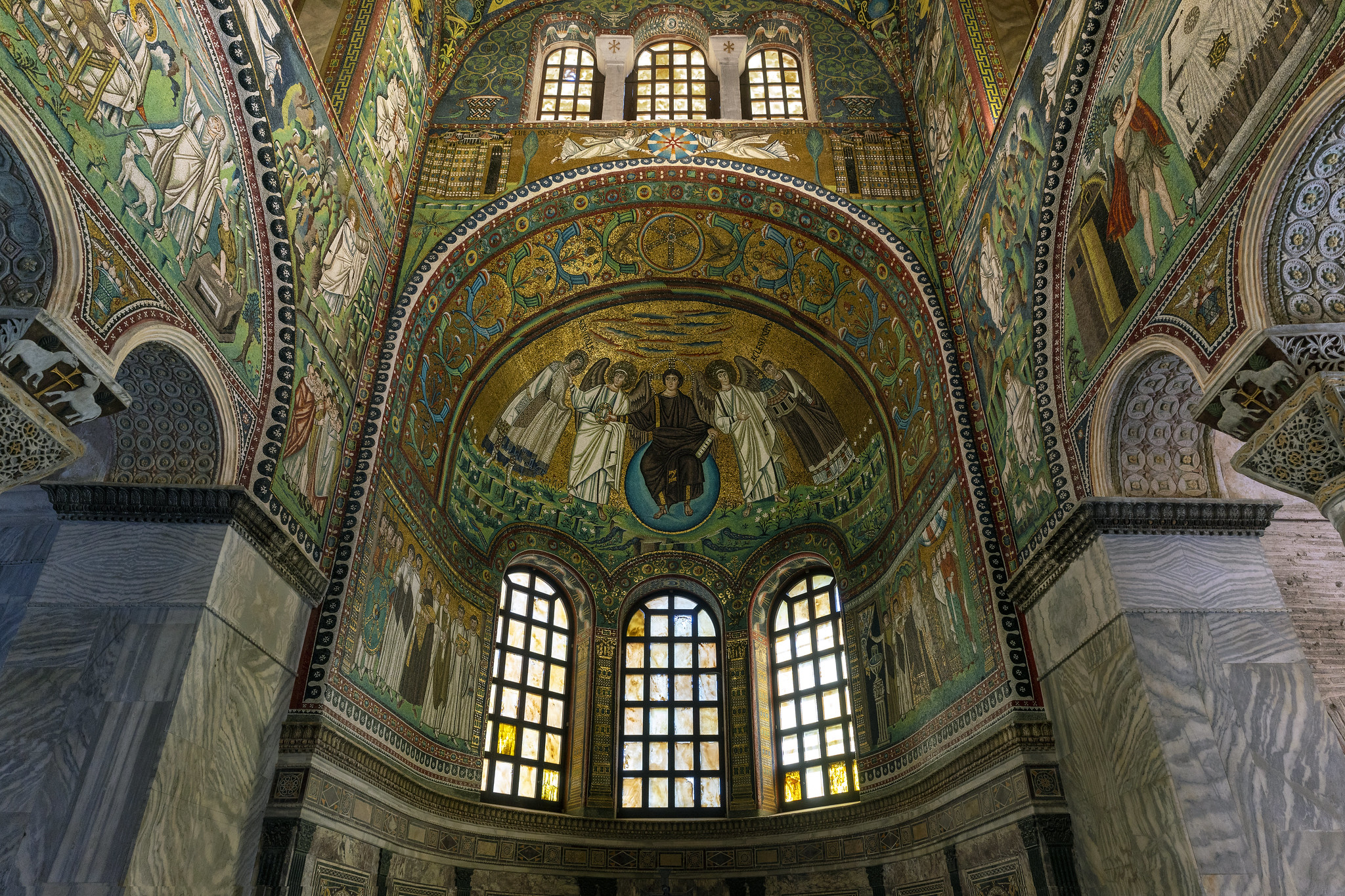 A major theme of this mosaic program is the authority of the emperor in the Christian plan of history.

The mosaic program can also be seen to give visual testament to the two major ambitions of Justinian’s reign: as heir to the tradition of Roman Emperors, Justinian sought to restore the territorial boundaries of the Empire. As the Christian Emperor, he saw himself as the defender of the faith. As such it was his duty to establish religious uniformity or Orthodoxy throughout the Empire. Who’s who in the mosaic and what they carry

In the chancel mosaic Justinian is posed frontally in the center. He is haloed and wears a crown and a purple imperial robe. He is flanked by members of the clergy on his left with the most prominent figure the Bishop Maximianus of Ravenna being labelled with an inscription. To Justinian’s right appear members of the imperial administration identified by the purple stripe, and at the very far left side of the mosaic appears a group of soldiers. 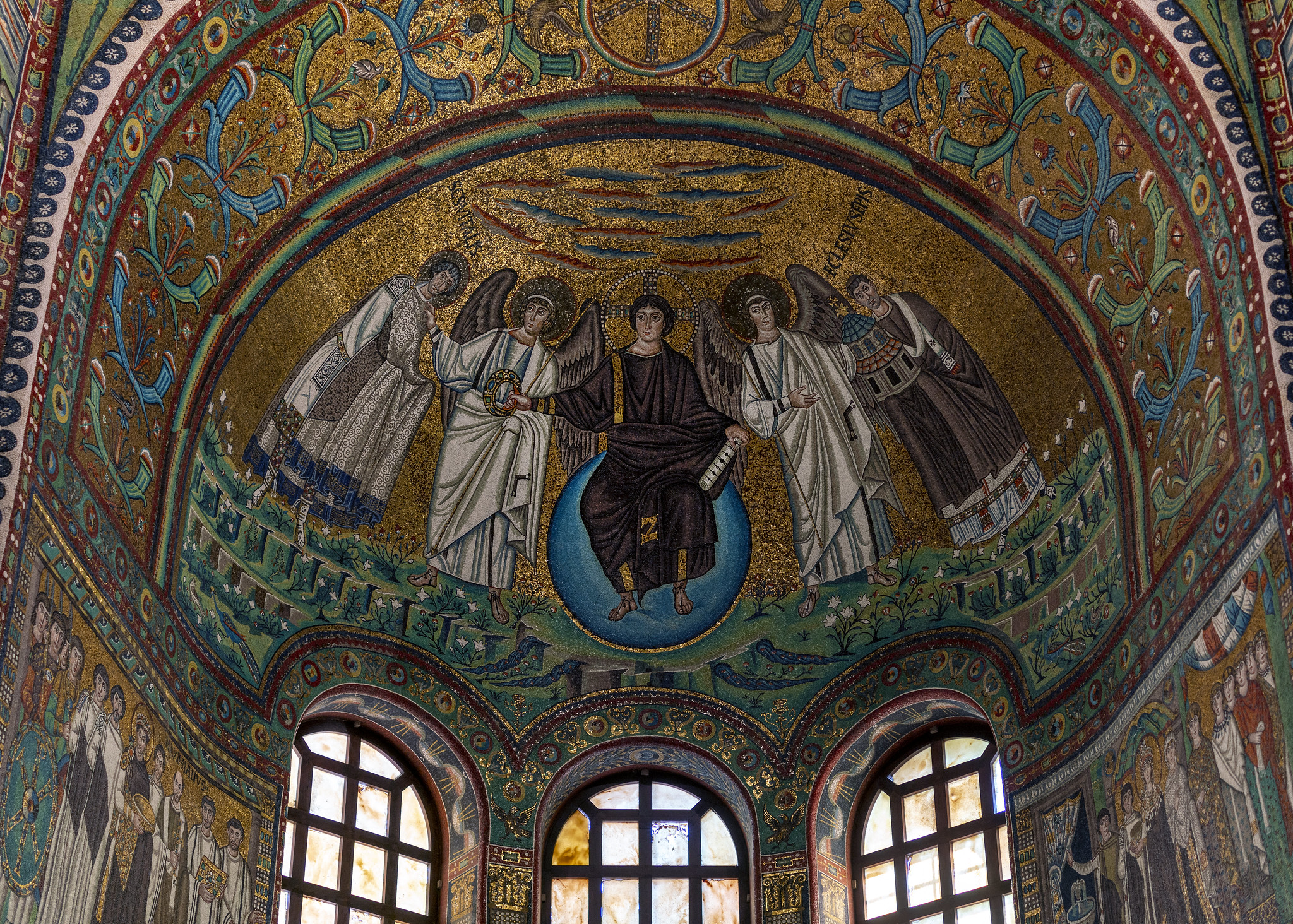 Christ, dressed in imperial purple and seated on an orb signifying universal dominion, offers the crown of martyrdom to St. Vitale, but the same gesture can be seen as offering the crown to Justinian in the mosaic below. Justinian is thus Christ’s vice-regent on earth, and his army is actually the army of Christ as signified by the Chi-Rho on the shield.

Closer examination of the Justinian mosaic reveals an ambiguity in the positioning of the figures of Justinian and the Bishop Maximianus. Overlapping suggests that Justinian is the closest figure to the viewer, but when the positioning of the figures on the picture plane is considered, it is evident that Maximianus’s feet are lower on the picture plane which suggests that he is closer to the viewer. This can perhaps be seen as an indication of the tension between the authority of the Emperor and the church. Read about the mosaic of Empress Theodora in San Vitale.

360 view of the apse (Columbia University).

360 view from the nave (Columbia University).

Sarah E. Bassett, Style and Meaning in the Imperial Panels at San Vitale.

Mosaics of San Vitale in Ravenna by Dr. Allen Farber.

Byzantium on the Metropolitan Museum of Art’s Timeline of Art History. 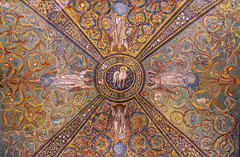 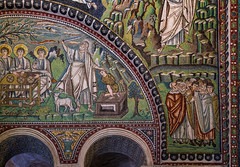 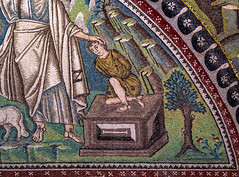 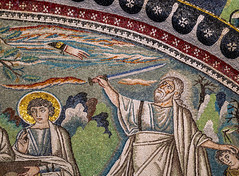 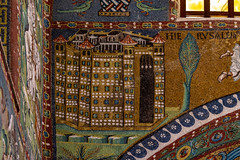 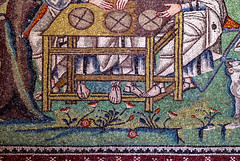 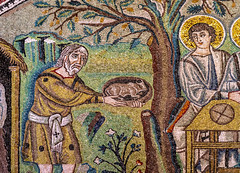