Despite being perched, somewhat snugly, between a cliff above the River Wear to its west and an abrupt incline to the east, the cathedral complex at Durham (begun 1093) was built almost to the largest proportions its tiny peninsula would allow. With walls regularly exceeding three meters in thickness and a final length of more than four hundred feet, it was once counted among the largest and most ambitious structures, not only of its generation, but almost of any following the decline of Roman imperial power in western Europe.

Between the late fifth and early twelfth centuries in fact, only three churches in western Europe could rival the size of Old St Peter’s in Rome. That enormous church was begun by the Roman Emperor Constantine in 318 C.E., soon after the Roman Empire (which included England) became officially Christian. In England, however, ground was broken on nine such giants—including Durham—in less than a generation. What sparked this building boom in the late eleventh century?

In September 1066, thousands of invaders led by William, the Duke of Normandy (also known as William the Conqueror) crossed the English Channel from Normandy (Northern France). The last pre-Norman King of England (Edward the Confessor) had died without a direct heir. By Christmas, 1066, William had been crowned King of England. Durham Cathedral is one measure of the swift and profound transformation brought about by the Norman Conquest in England in the eleventh and twelfth centuries: not only a new art and architectural style—what is variously referred to as Anglo-Norman or English Romanesque—but an unprecedented and almost military-industrial mode of construction. Another was the sudden influx of architectural elements such as rounded arches, supremely thick walls, alternating piers and columns, barrel vaults, and decorative arcading, among other motifs, that defined Norman and early Christian architecture on the Continent. “England was being filled everywhere with churches,” wrote one bishop named Herman from Ramsbury, “. . . they were magnificent, marvellous, extremely long and spacious, full of light and also quite beautiful.” [1] No written sources from the period are known to argue that a cathedral should be made large or, for that matter, why. And yet it is obvious from their sheer concentration that architectural gigantism must have been thought to carry a very powerful socio-political endowment. Dozens of fortified strongholds, castles, and halls followed within eighteen months of the invasion, and many hundreds of smaller parishes, priories, chamber blocks, water mills, and houses rose in tandem. It was, in all likelihood, nothing less than the most prodigious building program in Europe, by volume, per capita, prior to the Industrial Revolution. A new kind of sculptural decoration

And yet, despite having the plan, the scale and elevation of a more or less classic Norman cathedral, Durham was also exhaustively dressed in a curious new kind of atypical sculpture. Bold linear carvings abounded: chevrons (or zigzags), lozenges, and even spirals.

Inside the cathedral there was scarcely any surface—from the vaults to the arcading to the piers—that was not extravagantly embellished in some way (whether by chisel or by brush). In fact, by almost every standard, not only of design but of execution—the proficiency of jointing and angling, the near metronomic consistency of stone cutting, as well as the sheer finesse and precocity of its ornamentation—the masons’ work at Durham looks as if belongs in an entirely different world. Exactly which world has long been a matter for debate. Some art and architectural historians have made connections with earlier medieval Spain, Germany and France. The intersecting arcades at Aljafería in Zaragoza and, before it, the Great Mosque of Córdoba both make for intriguing alliances. Several cathedrals (including those at Mainz and Speyer) are interesting also for their shared size and extravagance. [2] None of these can be easily ignored (and I hesitate to rush through them). But there is still something like a broad if often quiet consensus that very few, if any, of these connections can be thought to be definitive (and certainly not singular influences) on Durham’s plan or execution.

Precisely where and/or when Durham’s masons derived any inspiration notwithstanding—and it’s probable, of course, that we’ll never know for sure—these analyses only stand to shed so much light on how and why these carvings actually functioned in practice. A better question might be: how they were encountered, how were they thought about by medieval men and women?

On the one hand, Durham’s uniquely elaborate surfaces could simply have been ornamental—that’s to say l’art pour l’art (art for art’s sake). It’s certainly been argued that the richer articulation of early medieval sculpture and painting was often commensurate with a desire to flaunt status or worth. Not insignificant therefore is the fact that the east end, the chancel, Saint Cuthbert’s shrine, his altar and the transepts—the spaces that most closely surrounded the saint’s remains—were the most ornate. Cuthbert, whose body was said to have been unearthed from its grave still flawless and even sweet-smelling (more than ten years after his death), was easily the most renowned saint in the north of England. The additionally lavish embellishment of his resting place may therefore have reflected a fitting relationship between decoration and dignity. On the other hand, might these extraordinarily idiosyncratic forms also have embodied some kind of information or message, a means perhaps to communicate? Witnesses and evidence are in short supply, with a single shining exception. Symeon of Durham was a monk and, for some time, the Cantor at Durham Cathedral. He is one of fewer than a dozen people known to have been in attendance at the building’s ground-breaking in 1093 as well as the formal interment of St. Cuthbert’s body, just over a decade later. Symeon effectively alleged that the destruction of the old church, and this new church—with its reformed clergy—is what Cuthbert would have wanted all along. Perhaps like Symeon, the new cathedral’s masons (and he may have been one of them) were largely working without precedent towards the evocation of the architecture of Cuthbert’s ancient past.

That being said, many other decorative motifs that did survive from seventh- and eighth-century Northumbria—the years during and immediately after Cuthbert’s lifetime—do share a similar and pronounced interest in the complex interplay of line, pattern and surface texture. The carpet page opening the Gospel of St Matthew in the early eighth-century Lindisfarne Gospels is a classic and exceptional example, as is, of course, the St Cuthbert Gospel itself. Having been placed in Cuthbert’s tomb in 698 on the occasion of his translation to the high altar at Lindisfarne (in Northumbria), this book and its original binding was unexpectedly found—or so the story goes—only eleven years after construction at Durham began. In the bold plastic articulation of the raised interlace on its upper cover, and especially in the schematic square settings of its lower cover it is easy to get a sense of a shared tradition. Put another way, Durham’s strange new sculpted forms may appear familiar yet unspecific, evocative yet alien, or they might seem only loosely reminiscent of some kind of earlier medieval style—now as then—because they weren’t so much copied as they were imagined. If, like its southern counterparts—Canterbury (begun 1067), Winchester (begun 1079), Ely (begun 1079), St Augustine’s (begun c. 1080), or Old St Paul’s (begun 1087)—the massive chassis of Durham Cathedral did indeed function as something like its “hard” power then its interior fabric, its extraordinarily ornate surfaces, perhaps hinted at a much “softer” kind of meaning.

This extraordinary building is regularly described as a kind of brilliant late-Romanesque lynchpin, linking with and pre-empting the nascent proto-Gothic style in its use of pointed arches. On account of its sheer precision, its scale, its vaulting and—in particular—its precocious pointed ribs, Durham has come to represent a sparkling new apogee, not only to the first generation of post-Conquest building, but to a continent-wide narrative of “progressive” structural experimentation. Do bear all of these twentieth-century assessments in mind when you visit the cathedral. And yet, perhaps take at least one further moment to imagine how the twelfth-century masons at Durham may actually have spent much of their time looking, not to the new, nor to the future, but somewhat nostalgically to a very foggy and distant past.

[1] For a modern translation, see Richard Gem, ‘The English Parish Church in the Eleventh and Early Twelfth Centuries: A Great Rebuilding?’, in Minsters and Parish Churches: The Local Church in Transition, 950-1200, ed. by John Blair (Oxford: Oxford University Press,1988), p. 21.

Durham Castle and Cathedral at UNESCO 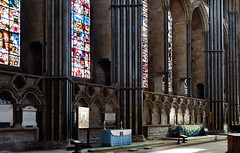 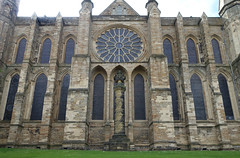 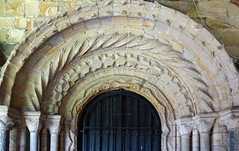 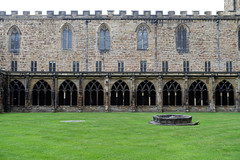 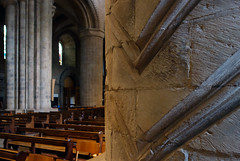 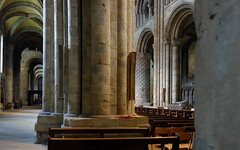 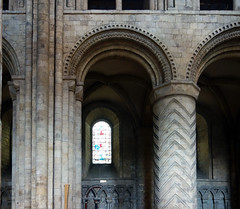