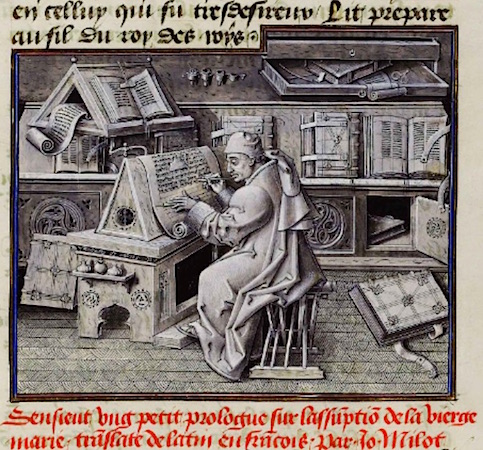 The hard work of the scribe

“The fingers write, but the whole body suffers,” (medieval saying)

Parchment makers prepared skins, scribes cut their pens and filled their ink pots, and binders packed their workshops with leather and wood. All these activities would be in vain were it not for the single event that sparked them: copying words.

Writing a medieval text with a quill is hard work.  The pen could only make a more or less downward movement because of how the nib was cut. It meant that letters had to be broken up into multiple pen strokes. This made writing a very slow process: a Bible could easily take a year to complete. A scribe’s handwriting—script—can tell us where and when he was trained to write. Script tells us these things because the shape of letters was constantly changing—script is thus an important historical tool that helps to place stories and information into their proper cultural-historical setting.

What you can learn from medieval script

Medieval script—the handwriting of the scribe—is the material representation of a text. An author may have composed the text, producing the original thought, poem or story, but it was often the scribe who put these words on the page. Much rides on how he did this. If he was inexperienced, it may be difficult to decipher his writing. If he was sloppy, the wrong words may appear on the page, or the right ones in the wrong order. The handwriting of scribes varied considerably. Not only did individual scribes vary their individual letter forms, as we still do today, but style of medieval script often depended on when and where it was written. This makes script extremely useful for book historians: the producer of a manuscript may tell us, between the lines, where and when he made the book. “My maker is from Germany,” a letter or abbreviation may for example say. From time to time scribes would even say so explicitly, in a colophon at the end of the book.

The main book script of the Middle Ages: Caroline Minuscule 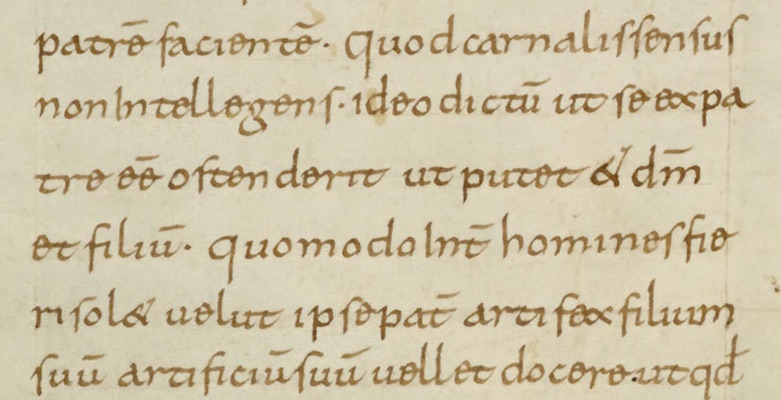 Caroline Minuscule is the primary script of the early Middle Ages. Created in the late eighth century, it became the main book script in the empire of Charlemagne. It is an elegant script with a particularly round and spacious appearance Because Charlemagne had conquered a vast amount of territory during his reign, he found himself with an empire of many cultures, each with its own style of handwriting. A cohesive and unifying script was needed if his administration was to function properly. Caroline Minuscule looks familiar to our modern eyes because producers of typeface working for early Italian printers used it as a model. In fact, the ubiquitous default font “Times Roman” on our computers is also based on Caroline Minuscule.

The transition to Gothic script

A transitional script, where some letters retain the form of the Caroline Minuscule, and some begin to show features of Gothic script. Statius, Thebais, The Hague, Royal Library, MS 128 A 38, c. 1100

From the middle of the eleventh century Caroline Minuscule, the dominant book script at that time, started to include new letter forms. By 1100 the number of letter transformations had grown to such an extent that the script looked different from Caroline. Slowly the script evolved into what may be regarded as the second major book script of the Middle Ages: Gothic (used from c. 1225). Where Caroline was a unifying script, the transitional script of “The Long Twelfth Century” (1075-1225) divided Europe in distinct regions. Scribes in Europe adopted the new, hybrid writing form at different speeds, while they also varied the actual appearance of certain letter forms. Scribes in Germany, for example, were far more conservative than their peers in France and England. 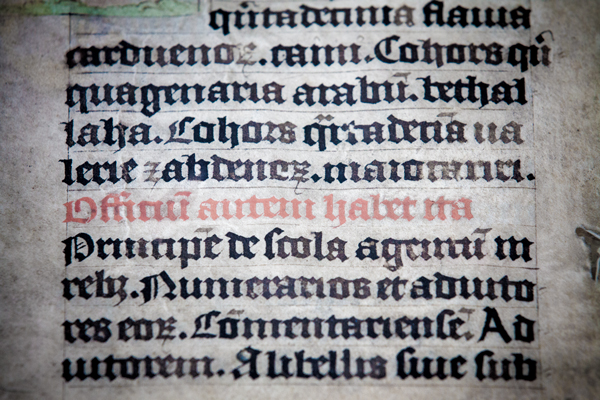 Books written between 1250 and 1600 were copied in a variety of Gothic scripts, some of which sport very different features. On the one side of the spectrum, there are formal book hands, presenting upright letters that appear to stand at attention. On the other side there are more casual cursive scripts, which were written with a thinner pen and featured connecting loops. By the early fifteenth century these two script forms were equally popular, although cursive script was introduced much later in book production. The introduction of cursive script is part of a broadening palette of scripts. This expansion may have resulted from the commercialization of book production—a consequence of the increasing demands of readers who purchased their books in small urban shops.

Cursive script began its career in the world of administration. Here it was used for account books, charters and other administrative texts. The clerks who produced these documents used a much thinner pen than what was used for formal book script. The flexible tip allowed for a faster pace and it gave the script a kind of “casual” feel.

While book script required the pen to be lifted between each stroke that formed the letter, with cursive script the pen remained on the surface of the page, with each letter connected by a ligature (or loop). Around 1300 this administrative script was exported to the world of book production. Students and scholars were early adopters, as were individuals involved in administrative duties, such as clerks, notaries and merchants. Civic clerks, for example, are known to have produced literary manuscripts after-hours, in part for an urban clientele who paid for their services. These professional users encouraged the migration of the script beyond its initial administrative setting.

How to make a pen (video from English Heritage)

From Manuscript to Print: the Evolution of the Medieval Book

“The art of the book” in Flemish Miniatures, online exhibition from the National Library of France