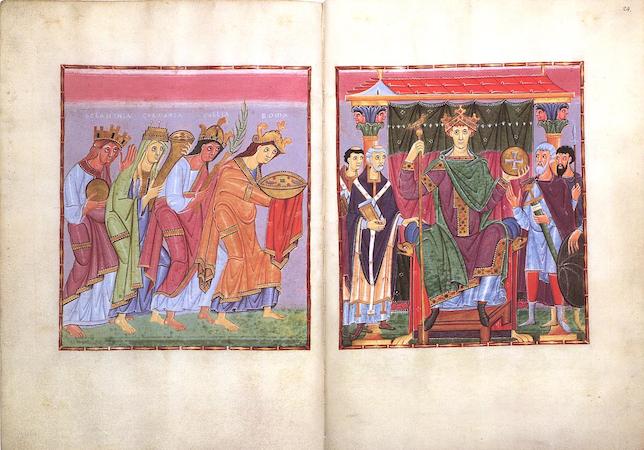 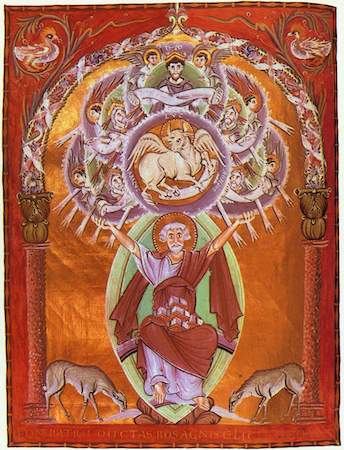 The double page opening of the ruler portrait of Otto III (f.24, above right) and the accompanying image of provinces bringing tribute (f.23v, above left) is taken from the Gospels of Otto III (Munich, Bayerische Stattsbibliothek, Clm.4453), one of the most magnificent manuscripts to have come down to us from the early medieval period. It is thought to have been made about the year 1000 at the Benedictine monastery of Reichenau on Lake Constance where Austria, Switzerland and Germany converge and belongs to a group of stylistically related manuscripts from the monastery known as the Liuthar group. The monk Liuthar is represented in another gospel-book made for Otto III that is now in the cathedral treasury at Aachen (Aachen, Domschatzkammer, G25). Liuthar is now thought to have been a scribe rather than an artist but the scribe was usually the main co-ordinating figure for a manuscript project.

The pages of the Gospels of Otto III manuscript measure 334 by 242 millimeters and are made of parchment. The script is written in ink, with gold initials, and the manuscript is extensively illustrated with portraits of the four evangelists (the authors of the four gospels), and scenes from the life of Christ as well as the ruler portrait. The front cover is decorated with precious jewels and inset with a Byzantine ivory representing the dormition or death of the Virgin Mary. The double-page is near the beginning of the manuscript before the gospel texts. 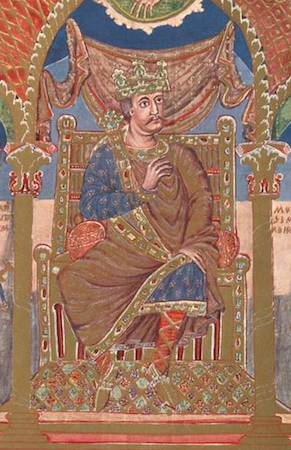 We do not know the name of the artist (as is the case for most of the painters from this period) but he most likely belonged to a team of craftsmen working on the manuscript. In devising the double opening, he appears not to have worked from his imagination but to have followed an earlier source such as the ruler portrait of Charles the Bald in the ninth century manuscript known as the Codex Aureus of Saint Emmeram (Munich, Bayerische Staatsbibliothek, Clm.14000, f. 5 v.).

Otto III looks out at us with hypnotic eyes, and is dressed in green and the imperial purple. He was the son of Otto II, who died when he was three, and a Byzantine Princess called Theophanu, and we know that he was an educated man. 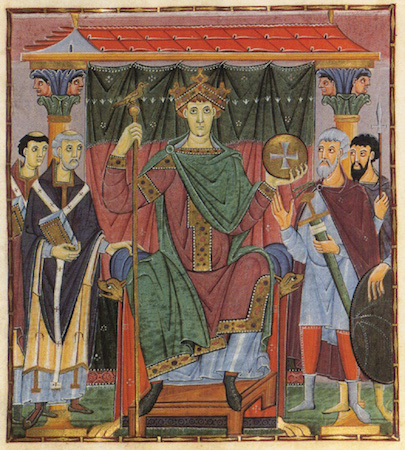 The pendant image depicts four personifications of the territories over which Otto ruled and who are shown bringing him tribute. They are identified as: Sclavinia (Slavic east), Germania (roughly Germany), Gallia (roughly France), and Roma (Rome). The device of the personification (whereby an abstract idea is represented by a human figure, usually a female one) goes back to classical art. There is a parallel between this scene and that of the adoration of the three magi (represented as crowned kings, a tenth century innovation) bringing gifts to the infant Christ (represented on f.29 of the manuscript), which underlines the quasi-divine nature of the Emperor. 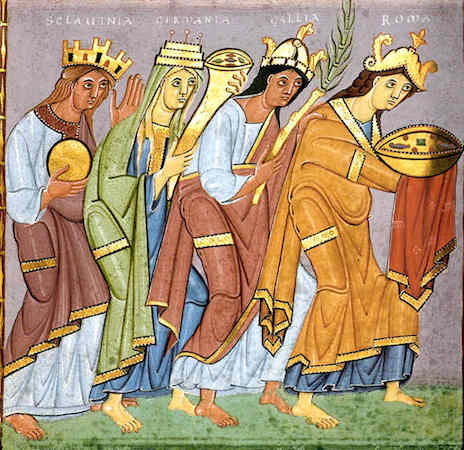 This is not a portrait in the conventional sense of a likeness and gives us very little idea of what Otto III must have looked like. Otto III is represented out of proportion with the much smaller figures that flank him—indicating his status. The opening pages probably represent an ideal of Otto III’s rule rather than the reality of his situation as his rule was fraught with division. The style of the opening looks back to late antique illusionism (note, for example, the lozenge-shaped ornament in the borders, and the atmospheric backgrounds which recall, for example, such manuscripts as the Vatican Vergil made in about 400) but has an extraordinary flatness to it as if the scene has been pressed between two panes of glass. 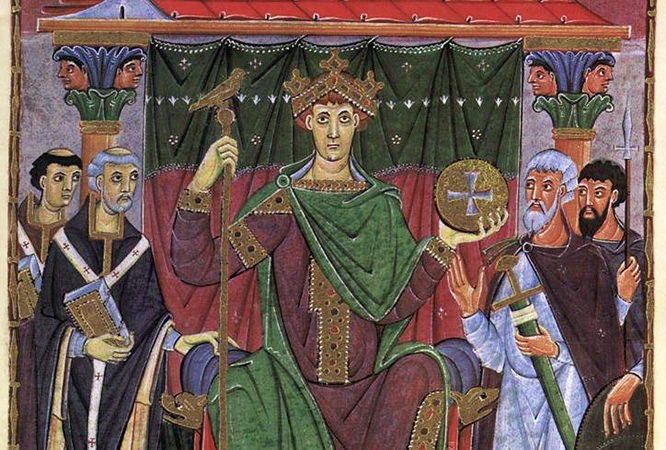 This style is known as Ottonian, a period style concept that covers both the reigns of the three emperors bearing the name Otto and of their immediate successors through the late eleventh century. It both precedes and anticipates the Romanesque style.

After Otto’s death, the manuscript passed to his cousin and heir, Henry II, who gave it to the cathedral of Bamberg which he founded, where it remained until 1803 when during the secularisation of the church it was transferred to the Bavarian State Library. The manuscript is rarely exhibited but a facsimile of it has been made.