For many of us, “Byzantine art” evokes gold icons with sacred figures or splendid church interiors. But the Byzantines also created art and architecture with no religious imagery and without explicit religious functions in mind.

Admittedly, classifying medieval art in tidy categories of the “religious” or “secular” is a bit anachronistic, especially in the arts of the Byzantine court, where religious and political elements were often seamlessly blended. For example, the Book of Ceremonies, compiled in the 10th century, describes the elaborate protocols that shaped life in the Byzantine palaces, and many—such as the coronation of a new emperor or empress—involve aspects that we would today call both religious and political.

The Book of Ceremonies describes the patriarch (a bishop who was the highest-ranking church official in Constantinople) crowning the emperor in the cathedral of Hagia Sophia:

[The patriarch] says a prayer over the ruler’s imperial crown, and having completed it, the patriarch himself takes the crown and places it on the ruler’s head. Immediately the people cry out, “Holy, holy, holy! Glory to God in the highest and peace on earth,” three times. Then: “Many years to so-and-so, great emperor and sovereign!”

Book of Ceremonies I, 38 An image in the twelfth-century Madrid Skylitzes, which shows the patriarch crowning emperor Constantine II, offers us a glimpse of what such a coronation event might have looked like. Such texts and images demonstrate that the sacred and secular often mingled in Byzantium. Acknowledging this, let us nevertheless consider Middle Byzantine “secular” artworks that display non-religious images and motifs. 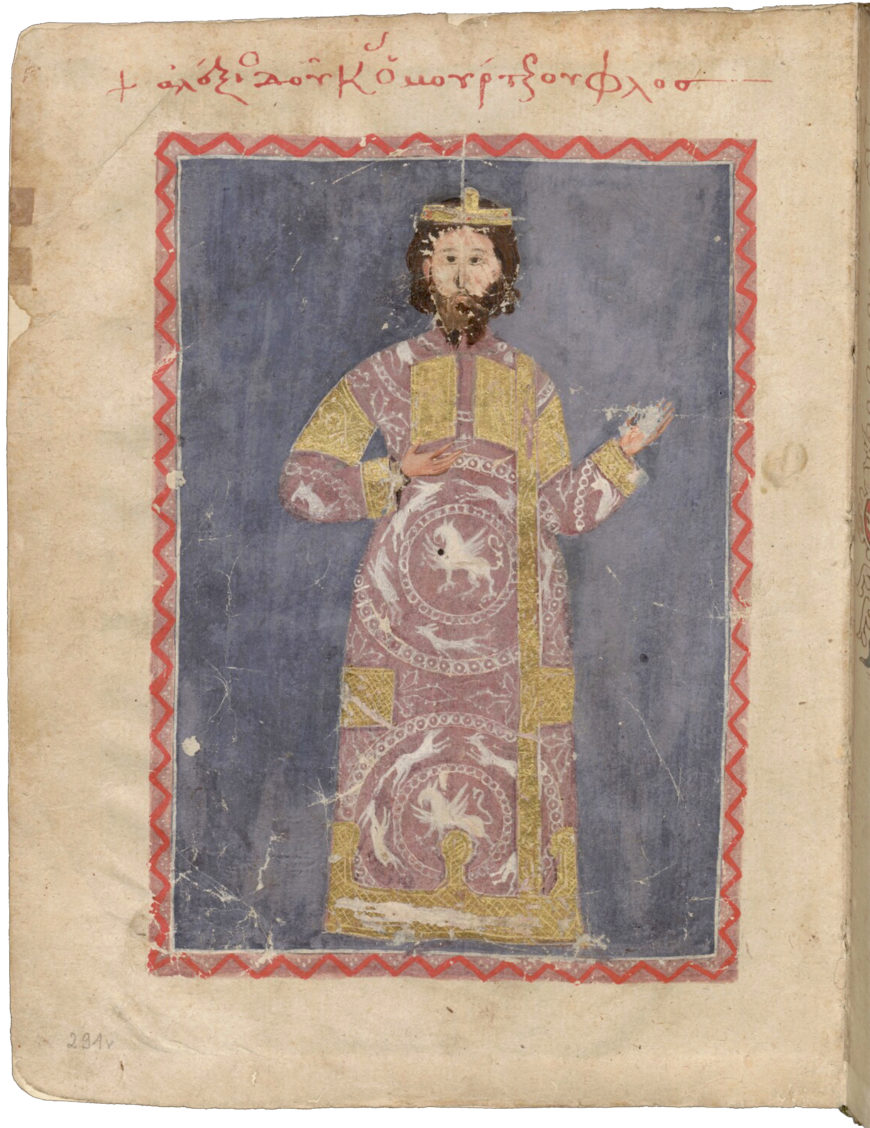 Manuscript illuminations show the gorgeous silk ceremonial garb of the court, as seen in this depiction of emperor Alexios V, whose brief reign ended with the Fourth Crusade‘s conquest of Constantinople in 1204. The emperor wears deep purple silk, not decorated with religious motifs, but with white medallion patterns that display a griffin at the center. Similar textiles survive, including an example at the cathedral treasury in Sion, Switzerland. 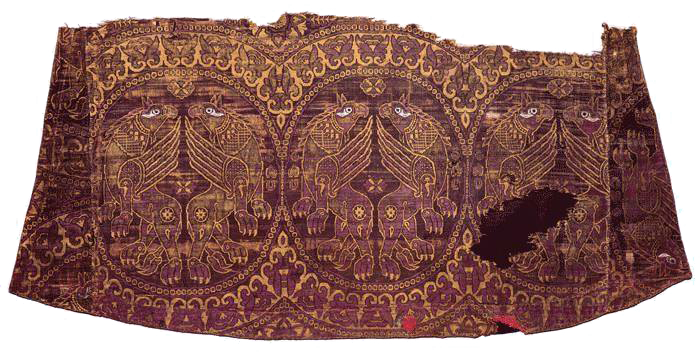 Although brownish-looking now, chemical analysis shows this Byzantine textile once had the rich purple hue seen in the manuscript since the silk was dyed with “murex,” an extremely expensive purple dye whose use was tightly restricted to the highest echelons of Byzantine society. The shared griffin imagery on both the manuscript illumination garment and Sion textile is typical of luxury goods, which often featured exotic and fictive creatures. The griffin is a mythical creature with the head and wings of an eagle, the body of a lion, and sometimes a snake for a tail, which originated in the ancient world and appears in the arts of many cultures.

A menagerie of strange beasts also populates Byzantine ceramics. A twelfth-century plate, recovered from a medieval shipwreck, shows a cheetah attacking a deer. Other Byzantine ceramic vessels featured abstract ornaments or even scenes from popular stories, such as this thirteenth-century plate that might render a scene from the tales of Digenis Akritis which roughly translates as “biracial border lord.” The Digenis Akritis is a Byzantine poem of the twelfth century that narrates the exploits of a fictional hero of Byzantine and Arab descent named Basil on the eastern frontier of the Byzantine empire. The plate shows a woman perched on the lap of a young man. It includes details such as the rabbit on the right, which broadcasts the amorous intentions of the central figures, since this animal symbolized fecundity and sex to its medieval audience.

A similar playfulness is seen in the imagery of Middle Byzantine ivory and bone boxes, or caskets, of which over forty survive. Additional panels also survive, detached from boxes that are now lost. While some caskets display Biblical figures such as Adam and Eve, many instead portray an eclectic array of figures that seem calculated to delight rather than edify. The tenth-century Veroli Casket includes scenes from classical mythology such as the hero Bellerophon with his winged horse Pegasus. Strips of ivory decorated with rosettes, which frame the scenes on the Veroli Casket, are another common characteristic of such boxes. Carved pieces of bone and wood attach to a wooden armature, which come in a few standard shapes. Earlier scholarship assumed these lavish works were made for women, but there is no imagery or other evidence that suggests they were seen as particularly feminine. Instead, what is clear is the use of classical, pagan imagery to signal the erudition and status of the owners, who may have used such boxes to store a range of precious objects. Various attempts have been made to connect the imagery on the San Marco bowl with specific classical myths, identifying such figures as Dionysus, Hermes, and Mars. But none of those explanations have ultimately been persuasive. The elegantly-posed nudes on the bowl, pictured in dramatic contrast with the dark enamel background, convey a loose sense of the classical rather than recounting a specific myth. A medieval audience would have recognized this object to be of the highest quality in terms of workmanship and value, and the classicizing rendering of figures, which vaguely allude to mythological scenes, further enhanced its status. Perhaps the scenes were inspired by ancient carved gems—such as this carnelian ring stone at The Metropolitan Museum of Art—which similarly show vignettes in silhouette?

Like the Veroli Casket and the Paris Psalter, the San Marco bowl has been attributed to the so-called “Macedonian Renaissance,” a phase of Middle Byzantine art soon after the end of Iconoclasm in which classical subject matter and a more naturalistic style were preferred by patrons of the Macedonian imperial family.

This bowl also references contemporary luxury goods from the Islamic world that were circulating around the eastern Mediterranean at this time. Around the inside of its rim and exterior of its base, the bowl displays pseudo-Arabic inscriptions. These are an imitation of a Kufic script, but they are not actual, readable texts. Alicia Walker has theorized that these classicizing figures and pseudo-Arabic inscriptions indicate that this vessel may have been used for divination, which was associated with ancient gods and eastern cultures. [1] But the significance of these non-Christian motifs remains uncertain. Even after the end of the Byzantine Iconoclastic Controversy that raised religious concerns over images, Byzantine artists and patrons continued to use and enjoy many kinds of non-religious images and subject matter. Sometimes this imagery overtly connected to classical mythology or medieval folktales, but other times—as with creatures both fictive and real—the imagery did not come from a specific story but was derived from a broader visual culture shared around the eastern Mediterranean in both Christian and Islamic artworks.