Some medieval readers preferred pretty pictures and shiny decoration in their books. Not only did the sparkling page appeal to them, it also proved their economic status, or that the gift they gave was special. Undecorated books were also expensive, but decorated copies cost a true fortune, especially if gold was used. In a process called gilding, the decorator would apply an ultra-thin film of flattened gold to the page, which looked not unlike our modern tin foil. 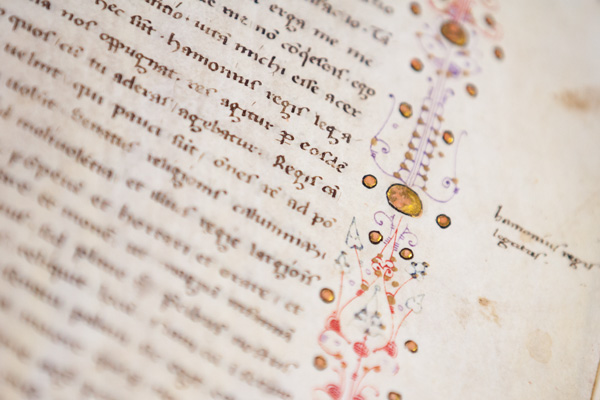 This page shows that the golden shapes were not appended directly to the surface of the parchment, but that they were stretched over little “hills” of plaster (note how the orange primer is shining through). This way the gold would catch the light from different angles, maximizing its dazzling effect. 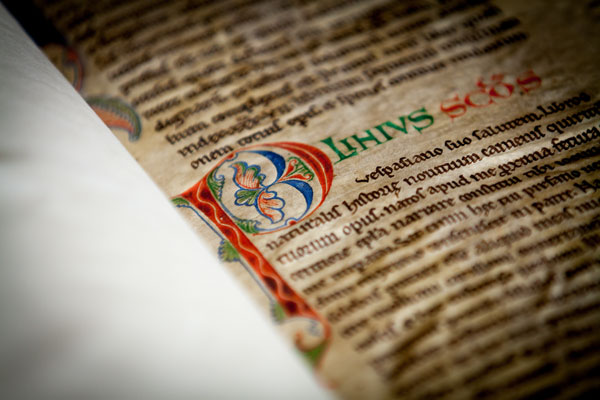 When the quires were filled with text, the rubrics (title or chapter heading, often in red) were in place, and the scribe had corrected his work, it was time for the finishing touches. Many medieval books contain some kind of decoration in addition to the written words, usually executed by a different artisan. There is a considerable variation in style and quality of decoration, and, consequently, in cost. At the lower end of the scale is penwork flourishing, red and blue lines drawn with the pen in various patterns and shapes. Some of these typify local styles, allowing us to tie a manuscript to a specific country, city or religious house. At the higher end of the scale is illumination: often sophisticated little paintings that included color and often gold. While decorated books stand out among their other cousins, on the whole they were not very common. 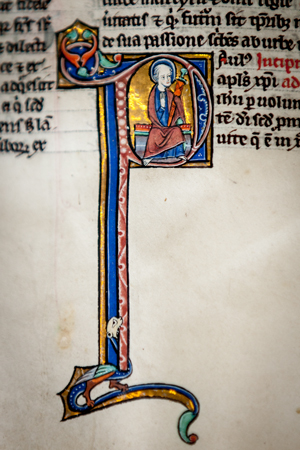 Normally, letters work together to form words that present a story. From time to time, however, we encounter a letter that contains a narrative all by itself. This giant P initiates the name Paulus (Paul), who was the author of the following Bible text. To mark the beginning of the text the decorator extended the P and applied color and gold to it, turning the letter into a visual aid. Contained in the letter is St Paul himself, presented as the soldier of Christ. In his hand there is a large sword, his standard attribute in medieval decoration, and his head is clearly bald, which also aided in his identification.

While in this case the intensions of the decorator are clear, the meaning of some such historiated initials can only be understood by reading the story they initiate. Miniatures contained even more extensive narratives.

In medieval times, penwork flourishing was the quickest and easiest way to add some color to the page. This style of decoration typically involves thin lines, usually in red and blue, drawn with a pen rather than a brush. The swirly lines form lively patterns with unexpected twists and turns, creating miniature mazes in which your eye gets lost easily. If you look carefully you may recognize familiar objects: a tree, the moon, pearls, a smiling face. The central figure attracting all of this artistic attention is the capital letter that needed decorating, in this case the letter “M” (for “Marcus”). The penwork decoration supported an important function of this letter, navigating the reader to the beginning of a new section of text. The specific flourishing patterns can often be pinpointed to a certain city or region, which turns these happy lines into a useful tool for the book historian.