By the beginning of the fourth century Christianity was a growing mystery religion in the cities of the Roman world. It was attracting converts from different social levels. Christian theology and art was enriched through the cultural interaction with the Greco-Roman world. But Christianity would be radically transformed through the actions of a single man.

In 312, the Emperor Constantine defeated his principal rival Maxentius at the Battle of the Milvian Bridge. Accounts of the battle describe how Constantine saw a sign in the heavens portending his victory. Eusebius, Constantine’s principal biographer, describes the sign as the Chi Rho, the first two letters in the Greek spelling of the name Christos. 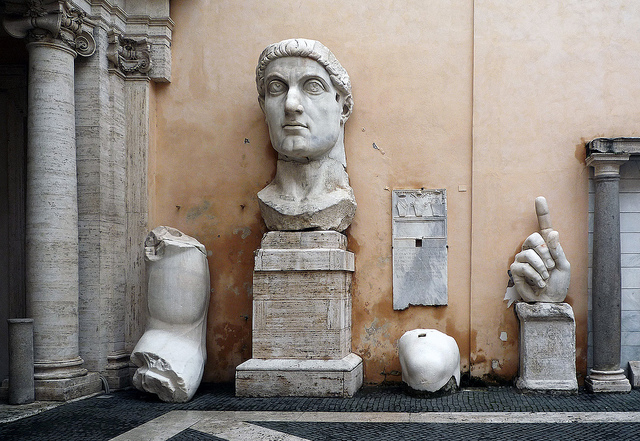 The transformation of Christianity is dramatically evident in a comparison between the architecture of the pre-Constantinian church and that of the Constantinian and post-Constantinian church. During the pre-Constantinian period, there was not much that distinguished the Christian churches from typical domestic architecture. A striking example of this is presented by a Christian community house, from the Syrian town of Dura-Europos. Here a typical home has been adapted to the needs of the congregation. A wall was taken down to combine two rooms: this was undoubtedly the room for services. It is significant that the most elaborate aspect of the house is the room designed as a baptistry. This reflects the importance of the sacrament of Baptism to initiate new members into the mysteries of the faith. Otherwise this building would not stand out from the other houses. This domestic architecture obviously would not meet the needs of Constantine’s architects.

Emperors for centuries had been responsible for the construction of temples throughout the Roman Empire. We have already observed the role of the public cults in defining one’s civic identity, and Emperors understood the construction of temples as testament to their pietas, or respect for the customary religious practices and traditions. So it was natural for Constantine to want to construct edifices in honor of Christianity. He built churches in Rome including the Church of St. Peter, he built churches in the Holy Land, most notably the Church of the Nativity in Bethlehem and the Church of the Holy Sepulcher in Jerusalem, and he built churches in his newly-constructed capital of Constantinople. 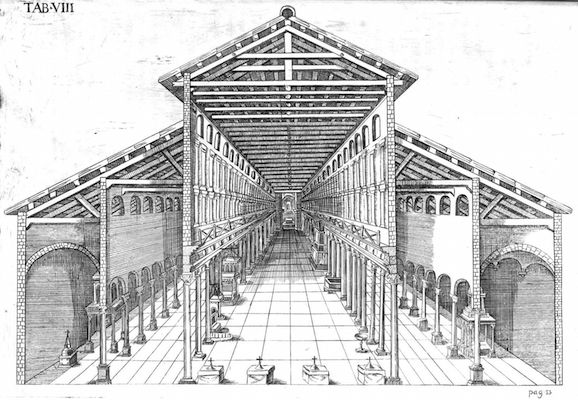 In creating these churches, Constantine and his architects confronted a major challenge: what should be the physical form of the church? Clearly the traditional form of the Roman temple would be inappropriate both from associations with pagan cults but also from the difference in function. Temples served as treasuries and dwellings for the cult; sacrifices occurred on outdoor altars with the temple as a backdrop. This meant that Roman temple architecture was largely an architecture of the exterior. Since Christianity was a mystery religion that demanded initiation to participate in religious practices, Christian architecture put greater emphasis on the interior. The Christian churches needed large interior spaces to house the growing congregations and to mark the clear separation of the faithful from the unfaithful. At the same time, the new Christian churches needed to be visually meaningful. The buildings needed to convey the new authority of Christianity. These factors were instrumental in the formulation during the Constantinian period of an architectural form that would become the core of Christian architecture to our own time: the Christian Basilica. 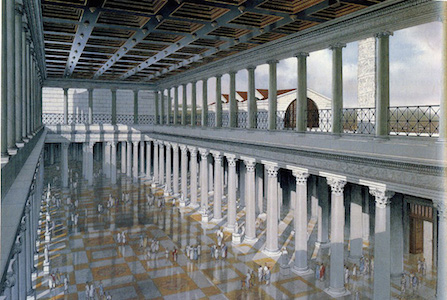 Reconstruction of the interior of the Basilica Ulpia

The basilica was not a new architectural form. The Romans had been building basilicas in their cities and as part of palace complexes for centuries. A particularly lavish one was the so-called Basilica Ulpia constructed as part of the Forum of the Emperor Trajan in the early second century. Basilicas had diverse functions but essentially they served as formal public meeting places. One of the major functions of the basilicas was as a site for law courts. These were housed in an architectural form known as the apse. In the Basilica Ulpia, these semi-circular forms project from either end of the building, but in some cases, the apses would project off of the length of the building. The magistrate who served as the representative of the authority of the Emperor would sit in a formal throne in the apse and issue his judgments. This function gave an aura of political authority to the basilicas. 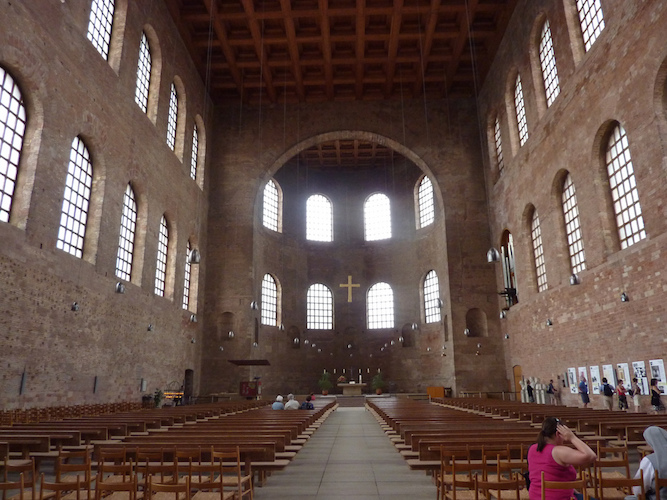 The basilica at Trier (Aula Palatina)

Basilicas also served as audience halls as a part of imperial palaces. A well-preserved example is found in the northern German town of Trier. Constantine built a basilica as part of a palace complex in Trier which served as his northern capital. Although a fairly simple architectural form and now stripped of its original interior decoration, the basilica must have been an imposing stage for the emperor. Imagine the emperor dressed in imperial regalia marching up the central axis as he makes his dramatic adventus or entrance along with other members of his court. This space would have humbled an emissary who approached the enthroned emperor seated in the apse.