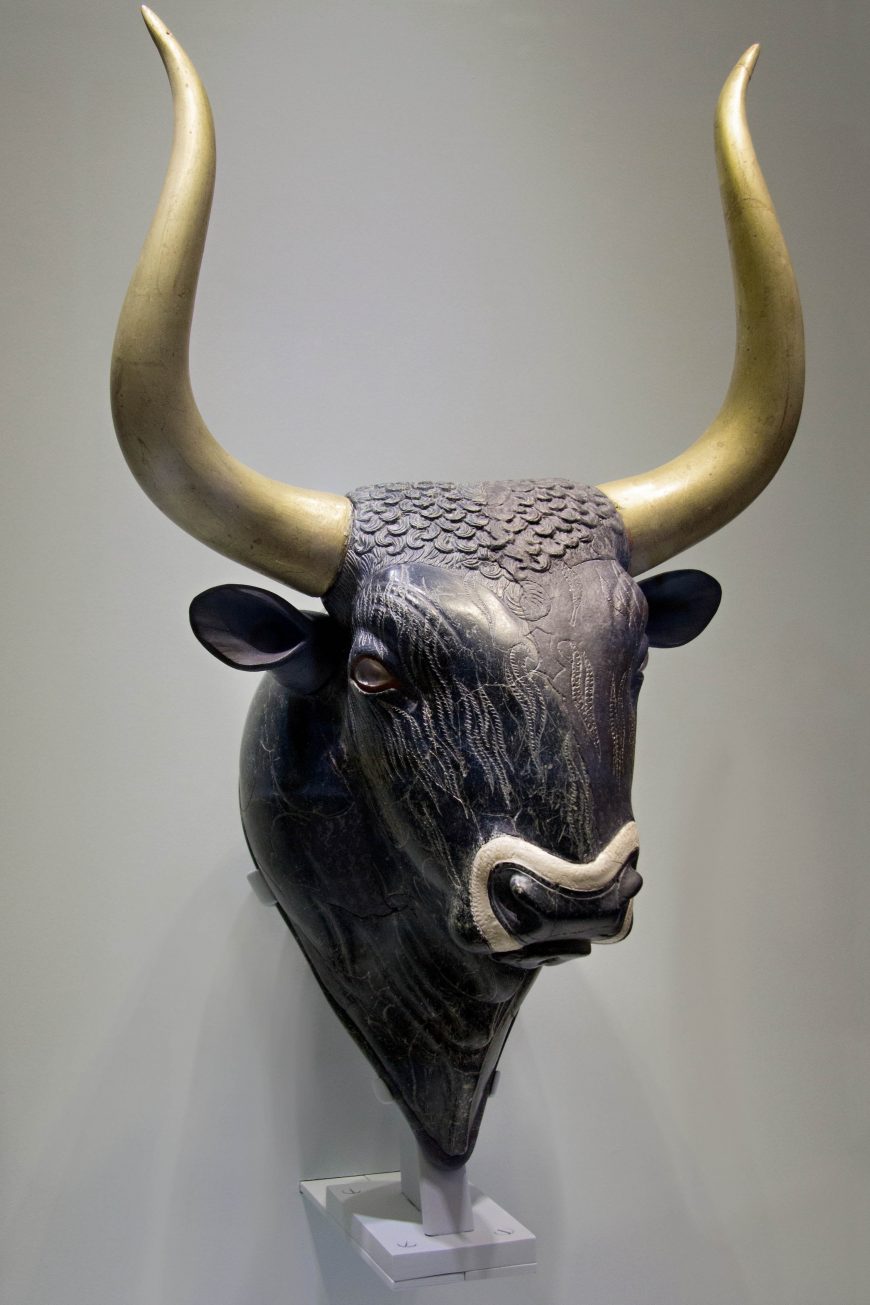 Profile and section of the bull’s head rhyton from the palace at Knossos, from Sir Arthur Evans, Town-Houses in Knossos of the New Era and Restored West Palace Section, with Its State Approach (London: Macmillan, 1928), p. 529 (Universitäts-Bibliothek Heidelberg)

Images of bulls are among the most important in Minoan art and as many as eleven bull’s head rhyta come from the site of Knossos.

A rhyton is a ritual vessel used for pouring liquids, with a hole at the top and the bottom. This rhyton was found in a structure called the Little Palace (it is called a “palace” because of its size and elite architectural elements, not because there was a throne in it), about 200 meters northwest of the palace at Knossos. The rhyton dates to the original Neopalatial period (1600-1450 B.C.E.), when the building was constructed, and was likely purposefully broken before it was discarded. It is heavily damaged—the left side of the bull’s head and left ear, as well as its golden horns, were restored by Sir Arthur Evans.

This bull’s head rhyton was carved from a single block of black steatite and is 26 cm (about 10 inches) in height, as restored. It is hollow, as a rhyton must be, with the hole at the top behind the bull’s horns and the hole at the bottom at its muzzle. The back of the rhyton is flat so that it could be laid down on a surface. Both realistic and stylized

The carving of the bull’s head is remarkable for its combination of vivid realism and stylization. For instance, the eyes of the bull were made of inlaid rock crystal lenses, painted on their flat back with a black iris and red pupil,  surrounded in white. The rim of the eye was inlaid with red jasper, giving the bull a wild, frightening, bloodshot look. 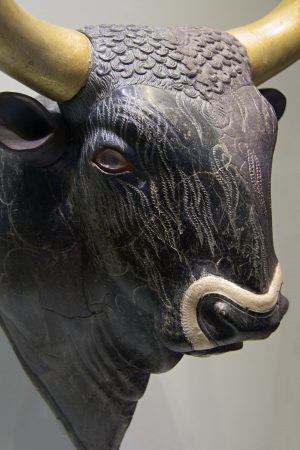 The bull is shaggy, with naturalistic locks hanging down its face, carved with very shallow incisions in the soft stone and filled with ground white stone (perhaps gypsum) for contrast against the black steatite. Also very realistically carved are the rolls of skin at the neck of the bull. However, other parts of the representation of the bull are rather stylized. For instance, the hair whorl at the center of the bull’s forehead looks more like a spiral than a swirled tuft of hair, and this is topped by a patch of stylized fur with curls arranged in rows. Lastly, the patch of white hair around the snout of the bull, rendered with shell inlay, looks graphic in its straight borders.

Bull’s head rhyta such as this one were some of the most valued treasures of Minoan Crete. Images of them appear in 18th dynasty Egyptian wall paintings, where they are shown as pharaonic gifts from visiting Cretans. Many examples of rhyta have been archaeologically recovered; some twenty-three of them have been found at archaeological sites on Crete and the Greek mainland. What is remarkable is that all have been found purposefully destroyed. This has led archaeologists to believe that after the utility of a bull’s head rhyton had expired, it was ritually destroyed. Beth Ann Judas, “Keftiu and Griffins: An Exploration of the Liminal in the Egyptian Worldview,” in Current Research in Egyptology 2014 (Oxbow, 2015)