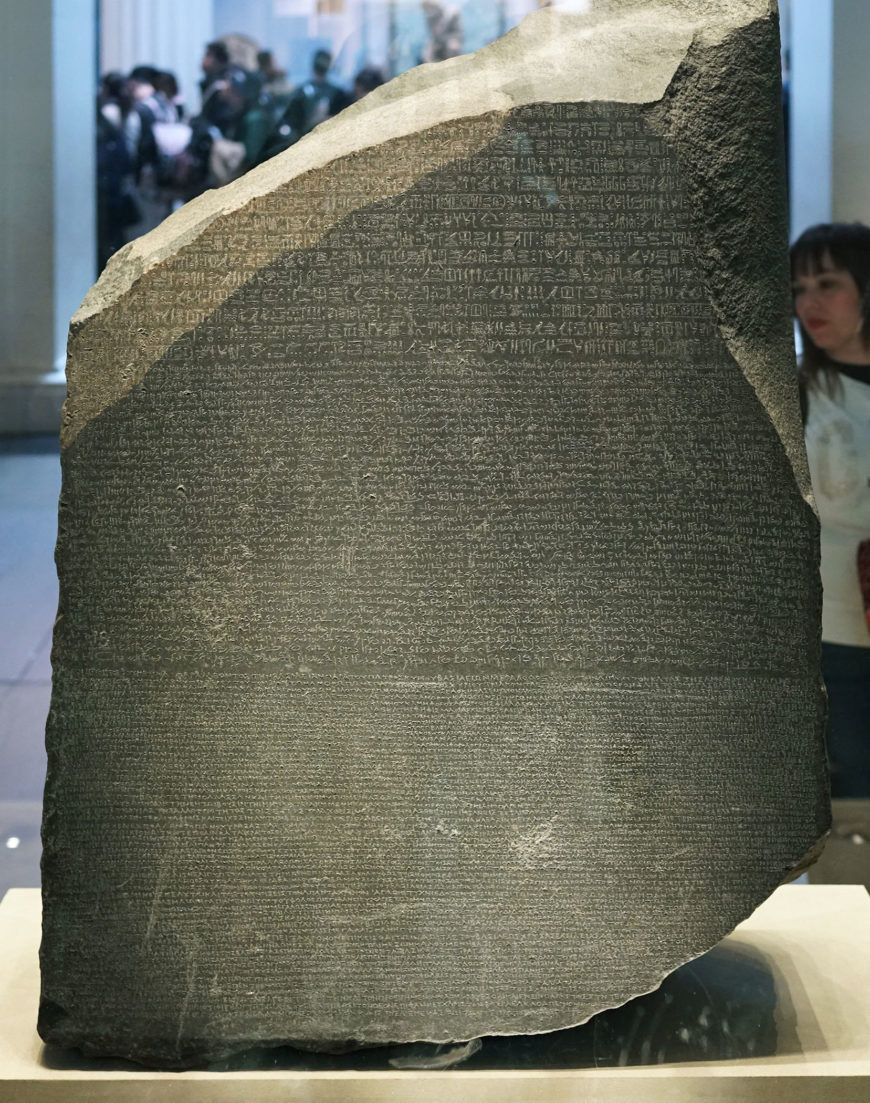 The key to translating hieroglyphics A reconstruction of the stela of which the Rosetta Stone was originally a part (A. Parrot, CC BY-SA 4.0)

The Rosetta Stone is one of the most important objects in the British Museum as it holds the key to understanding Egyptian hieroglyphs—a script made up of small pictures that was used originally in ancient Egypt for religious texts. Hieroglyphic writing died out in Egypt in the fourth century C.E.. Over time the knowledge of how to read hieroglyphs was lost, until the discovery of the Rosetta Stone in 1799 and its subsequent decipherment.

The Stone is a tablet of black rock called granodiorite. It is part of a larger inscribed stone that would have stood some 2 meters high. The top part of the stone has broken off at an angle—in line with a band of pink granite whose crystalline structure glints a little in the light. The back of the Rosetta stone is rough, where it has been hewn into shape, but the front face is smooth and crammed with text, inscribed in three different scripts. These form three distinct bands of writing. 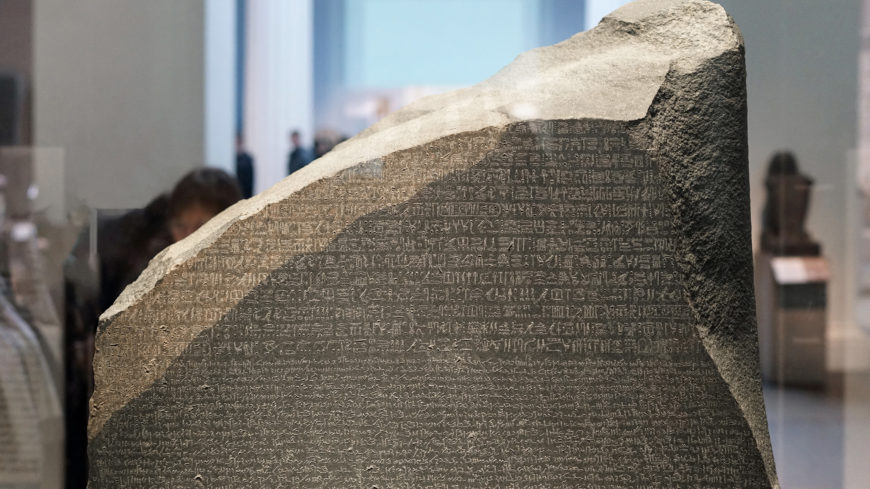 Three translations of the same decree

The inscriptions are three translations of the same decree, passed by a council of priests, that affirms the royal cult of the thirteen-year-old Ptolemy V on the first anniversary of his coronation. The decree is inscribed on the stone three times, in hieroglyphic (suitable for a priestly decree), demotic (the native script used for daily purposes), and Greek (the language of the administration). The importance of this to Egyptology is immense. In the early years of the nineteenth century, scholars were able to use the Greek inscription on this stone as the key to deciphering the others.

Opposition to the Ptolemies

In previous years the family of the Ptolemies had lost control of certain parts of the country. It had taken their armies some time to put down opposition in the Delta, and parts of southern Upper Egypt, particularly Thebes, were not yet back under the government’s control.

Before the Ptolemaic era (that is before about 332 B.C.E.), decrees in hieroglyphs such as this were usually set up by the king. It shows how much things had changed from Pharaonic times that the priests, the only people who had kept the knowledge of writing hieroglyphs, were now issuing such decrees. The list of good deeds done by the king for the temples hints at the way in which the support of the priests was ensured.

The end of hieroglyphics

Soon after the end of the fourth century C.E., when hieroglyphs had gone out of use, the knowledge of how to read and write them disappeared. In the early years of the nineteenth century, some 1400 years later, scholars were able to use the Greek inscription on this stone as the key to decipher them.

Soldiers in Napoleon’s army discovered the Rosetta Stone in 1799 while digging the foundations of an addition to a fort near the town of el-Rashid (Rosetta). On Napoleon’s defeat, the stone became the property of the British under the terms of the Treaty of Alexandria (1801) along with other antiquities that the French had found.

The Rosetta Stone has been exhibited in the British Museum since 1802, with only one break. Towards the end of the First World War, in 1917, when the Museum was concerned about heavy bombing in London, they moved it to safety along with other, portable, ‘important’ objects. The Rosetta Stone spent the next two years in a station on the Postal Tube Railway 50 feet below the ground at Holborn. 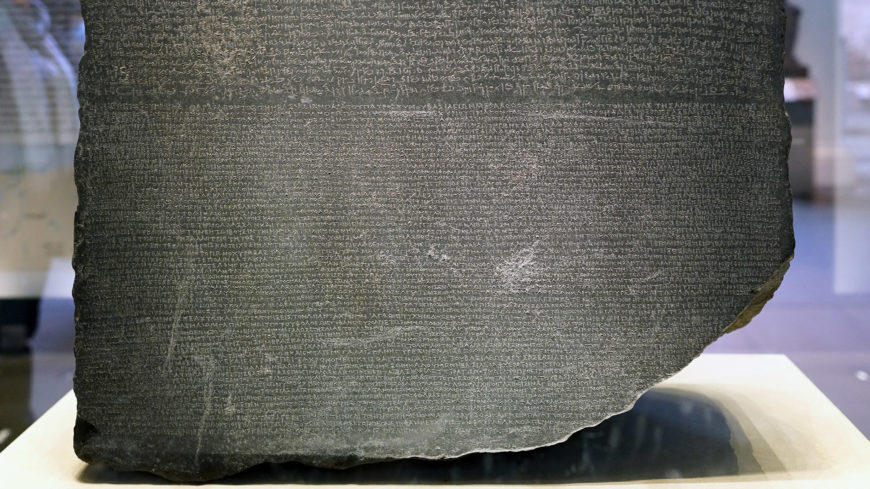 When the Rosetta Stone was discovered in 1799, the carved characters that covered its surface were quickly copied. Printer’s ink was applied to the Stone and white paper was laid over it. When the paper was removed, it revealed an exact copy of the text—but in reverse. Since then, many copies or “facsimiles” have been made using a variety of materials. Inevitably, the surface of the Stone accumulated many layers of material left over from these activities, despite attempts to remove any residue. Once on display, the grease from many thousands of human hands eager to touch the Stone added to the problem.

An opportunity for investigation and cleaning the Rosetta Stone arose when this famous object was made the centerpiece of the Cracking Codes exhibition at The British Museum in 1999. When work commenced to remove all but the original, ancient material, the stone was black with white lettering. As treatment progressed, the different substances uncovered were analyzed. Grease from human handling, a coating of carnauba wax from the early 1800s and printer’s ink from 1799 were cleaned away using cotton wool swabs and liniment of soap, white spirit, acetone and purified water. Finally, white paint in the text, applied in 1981, which had been left in place until now as a protective coating, was removed with cotton swabs and purified water. A small square at the bottom left corner of the face of the Stone was left untouched to show the darkened wax and the white infill.

The Stone has a dark grey-pinkish tone with a pink streak running through it. Today you can see traces of a reddish brown in the text. This material was analyzed and found to be a clear mineral known as hydroxyapatite; the color may be due to iron traces. The mineral may have been applied deliberately, but there is no proof of this. This substance is not known by experts to have been used as a pigment, nor to have been used as a base for painting (a ground) in ancient Egypt.

Translation of the demotic text

[Year 9, Xandikos day 4], which is equivalent to the Egyptian month, second month of Peret, day 18, of the King “The Youth who has appeared as King in the place of his Father,” the Lord of the Uraei “Whose might is great, who has established Egypt, causing it to prosper, whose heart is beneficial before the gods…”

Read the rest of the Rosetta Stone translation here

The Rosetta Stone from the BBC’s History of the World

A.K. Bowman, Egypt after the Pharaohs: 332 BC–AD 642; From Alexander to the Arab Conquest (Berkeley, University of California Press, 1996).

Cite this page as: The British Museum, "The Rosetta Stone," in Smarthistory, August 29, 2016, accessed February 3, 2023, https://smarthistory.org/the-rosetta-stone/.