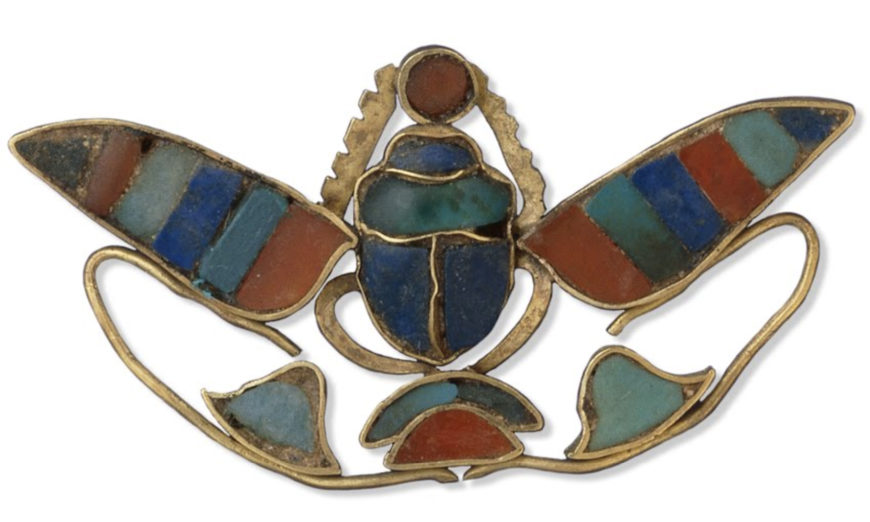 This piece of jewelry is a pendant in the form of a winged scarab. It is made of electrum (a naturally occurring alloy of gold and silver) inlaid with carnelian, green feldspar, and lapis lazuli. Two small tubes on the underside of the object were used to suspend it.

The central ornament forms the throne name of the Middle Kingdom King Senwosret II: Kha-kheper-Ra. The word kha is represented by the hill at the bottom, and the sign kheper in the middle is figured by a scarab. Ra is depicted at the top by a sun disc between the two front legs of the beetle. All royal names have a meaning, and Kha-kheper-Ra can be translated as “The form of Ra is rising.”

The beetle lays its eggs in a ball of dung and pushes it around. The Egyptians used this as an image and metaphor for the passage of the sun across the sky. The young scarab beetles hatch out of the ball of dung which symbolized the concept of new life and rebirth through the sun. Either side of the kha hieroglyph is a papyrus flower, another symbol of rebirth.

Senwosret II was the fourth ruler of the Twelfth Dynasty. We have only a few buildings and inscriptions from his reign but we do know the location of his tomb. Senwosret II built a pyramid at Lahun in the Fayum, south of modern Cairo. Unlike the Old Kingdom pyramids built in stone, the memorial monument of Senusret II and his Middle Kingdom contemporaries were made out of mud bricks with a stone core.