The temple of Athena Nike (Athena as a goddess of victory) is the smallest temple at the Acropolis in Athens, placed at its southwest corner, at the edge of a high cliff (see images above). Its construction was completed in the year 420 B.C.E., during the so called High Classical Period, according to the design of Kallikrates (the same architect who was responsible for the construction of the Parthenon). The temple by Kallikrates replaced an earlier small temple, which got completely destroyed during the Persian wars.

Reconstruction diagram of the Athenian Acropolis

The spot, highly vulnerable to attack but also well placed for defense, was very appropriate for the worship of the goddess of victory. There is some archaeological evidence, that the location was used for religious rituals already in Mycenaean age (Mycenaean was a period of early Greek history, roughly from 1600 to 1100 B.C.E.). Mycenaeans also raised the first defensive bastion on the spot; its fragments are preserved in the temple’s basement. The temple of Athena Nike, built in Ionic order of beautiful white Pentelic marble, has columns at the front and back but not on the sides of the cella; this kind of floor plan is called an amphiprostyle. Because of the small size of the structure, there are only four columns on each side. The columns are monolithic, which means that each one of them was made of a single block of stone (instead of horizontal drums, as it is in the case of the Parthenon). This small and elegant structure is sometimes called the pearl of the Acropolis, since it was designed and decorated with great care. For example, interestingly, its side columns have volutes both in the front and at the side, in order to create a pleasant view from any viewpoint. The Greeks considered their temples as a kind of monumental sculpture, which was supposed to be viewed from all sides and experienced in connection to its surroundings. The Romans later had a different concept—for them, the frontal view was most important (for example, the Roman Temple of Portunus). Amphiprostyle plan of the Temple of Athena Nike

Another interesting detail is that the columns of the temple of Athena Nike are not as slender as those of many other Ionic buildings. Usually the proportions between the width and the height of an Ionic column was 1:9 or even 1:11. Here the proportion is 1:7—and the reason for that choice might have been the intention to create a harmonious whole with other buildings nearby. The temple of Athena Nike stands just next to the Propylaea (below), a heavy, monumental gateway to the Acropolis, built in the Doric order. To visually counteract this massive structure, the architect may have decided to widen the columns, otherwise the building might feel out of place, and too delicate in contrast to the neighboring architectural mass of the Propylaea. We know that the ancient Greeks were very aware of mathematical ratios while constructing architecture or creating statues, feeling that the key to beauty lies in correct proportion. The temple of Athena Nike, as with all Greek temples, was considered a home of the deity, represented in its statue, and was not a place where regular people would enter. The believers would simply perform rituals in front of the temple, where a small altar was placed, and could take a glimpse of the sculpted figure of the goddess through the space between the columns. The privilege of entering the temple was reserved for the priestesses, who held a respected position in Greek society. As the name suggests, the temple housed the statue of Athena Nike, a symbol of victory. It probably had a connection to the victory of the Greeks against the Persians around half a century earlier. Nike usually had wings, but in this case we know that the statue had no wings, hence it was called Athena Apteros (without wings). The ancient Greek writer Pausanias later explained that the statue of Athena had no wings, so that she could never leave Athens. The history of this architectural monument has been quite tumultuous. In the 5th century C.E. the temple was converted into a Christian church, then in the 17th century it was completely dismantled by the Ottoman Turks who needed its material to build fortifications. The temple was later reconstructed after Greece regained independence in 1832. In the 1930s the building was restored again. Very recently, new concerns about the structure’s integrity prompted a new conservation project. First, a team of specialists completely dismantled the temple. Each of its parts was examined and mended, and eventually the entire building was reassembled using the original pieces, with some fill wherever it was needed. These additions can be easily recognized since they are of a lighter color than the original marble. The temple of Athena Nike featured beautiful sculptural decoration, including a typical continuous Ionic frieze, which on the eastern side represented a gathering of gods. On the southern wall, the sculptor decided to show a battle between Greeks and Persians, and on the remaining sides, battles between Greeks and other warriors. Sculptures on the pediments, almost entirely lost, most probably depicted the Gigantomachy and Amazonomachy. Best known are reliefs from the outside of the stone parapet that surrounded the temple at the cliff’s edge. These represented Nike in different poses and could be admired by people climbing the stairs to the Acropolis. Most famous of these is the Nike Adjusting Her Sandal (above) which presents the goddess in a simple, everyday gesture, perhaps adjusting her sandal (or maybe taking it off) as she prepares to enter the sacred precinct. Whatever she is doing, the relief is still charming in its elegance and simplicity. Both Nike Adjusting Her Sandal and parts of the frieze can be admired today at the Acropolis Museum. 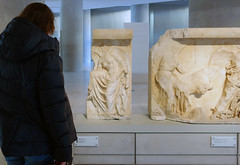 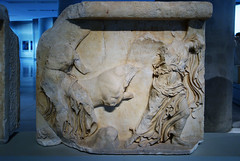 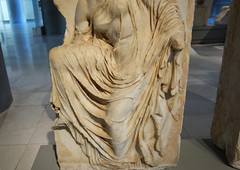 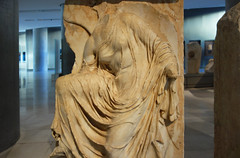 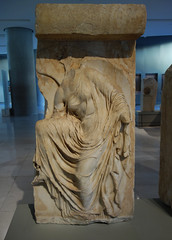 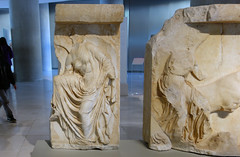 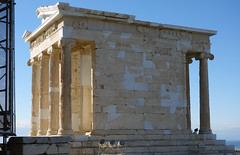 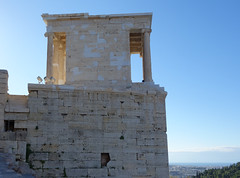 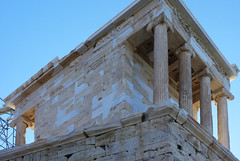 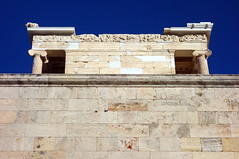 Cite this page as: Katarzyna Minollari, "Temple of Athena Nike on the Athenian Acropolis," in Smarthistory, September 11, 2016, accessed January 27, 2022, https://smarthistory.org/temple-nike/.