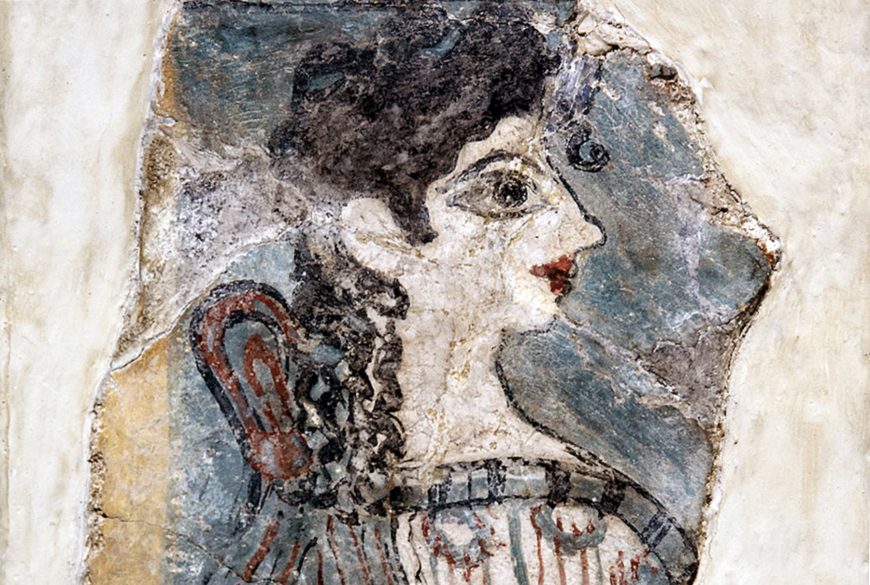 This image of a young woman with a bright dress and curly hair is among the best known images in Minoan art. It is also one of the few representations of Minoan people rendered in color and detail, and it is a beautiful example of Minoan wall painting. Shortly after it was first discovered by Sir Arthur Evans at Knossos, it was seen by Edmond Pottier, a famous art historian of Greek pottery, who likened her charming look to the contemporary women of Paris. She has been known as “La Parisienne” ever since. Only La Parisienne’s head and upper body are preserved. Her hair is black and curly, with one curl springing down onto her forehead and others cascading down her neck and upper back. Her skin is white, which is in imitation of the ancient Egyptian color convention (women painted white, men brown), and her large, darkly outlined eye also reminds us of Egyptian style, but her bright red lips are unique. She wears an elaborately woven blue and red striped dress, with a blue banded edge attached with red flecked loops. Tied to the back of the dress is a “sacred knot,” as Evans first called it. This is a loop of long cloth tied with another loop at the nape of the neck, leaving a length of the cloth trailing down the back.

This is one of only two representations of a woman actually wearing a sacred knot, although the knots themselves are found on seals, painted on pottery, in other frescos, and rendered in ivory or faience. This knot is thought to designate the wearer as a holy person, so this Minoan woman may be a priestess. The western wing of the palace at Knossos (photo: tedbassman, CC BY 2.0) The wall painting of which La Parisienne is a part was discovered heavily damaged and fallen from an upper story in the western wing of Knossos. It was painted in buon fresco (on wet plaster) as most Minoan wall paintings were, and given its archaeological context is likely one of the last painted works of the palace, dating to LM III (around 1350 B.C.E.). Specifically, this fragment was part of a two tiered scene that is about a half-meter (about 1.5 feet) wide, called the Camp Stool fresco (shown below as a reconstruction). Featured on both the top and bottom panels are pairs of men and women in profile sitting and standing and holding up elegant vessels. La Parisienne comes from one of the female pairs.

It has been suggested that the part of the palace of Knossos from which this painted scene fell was used for ceremonies and feasting; if this is true, subject matter depicting toasts being made would fit in nicely. Whatever her original meaning, La Parisienne is an enduring testament to the skill of Minoan fresco painters. 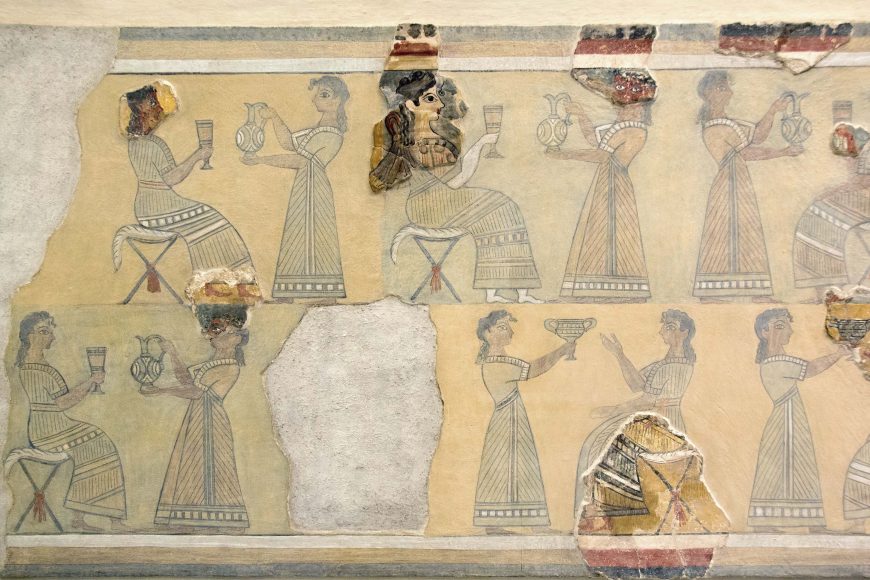 The Camp Stool fresco (reconstruction), c. 1350 B.C.E., from west wing of the palace of Knossos (Archaeological Museum of Heraklion, Crete)

This object at the Archaeological Museum of Heraklion