The wall paintings from Nebamun’s tomb-chapel depict an idealized vision of daily ancient Egyptian life. Much less is known about the lives of the majority of society. The study of human remains in poor cemeteries is often the only way to learn about the short lives of most ancient Egyptians. Many of the objects that remain belonged to the wealthy and survived only because they were buried in tombs. They provide a glimpse of these elite people’s lavish lifestyles.

Glass bottle in the form of a fish 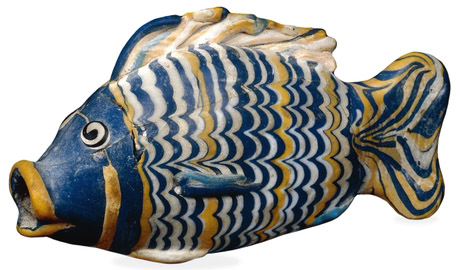 Glass vessels seem to have been primarily functional rather than ritual objects; their main use was as containers for cosmetics or precious oils. However, in this case the fish design might hint at some further meaning, complementing its beauty as an elite personal item.

The fish represented is a Nile tilapia fish, which hatches and shelters her young in her mouth. The emergence of live offspring from the tilapia’s mouth caused it to be used as a symbol of rebirth and regeneration; it was frequently worn as an amulet.

This is the most complete and spectacular example of several surviving fish-shaped glass vessels made around this period. It was found under the floor in a house at Tell el-Amarna, where it may have been buried by its owner.

Glass vessels from the New Kingdom (1550-1070 B.C.E.) are highly colorful objects, and glass was often used as a more versatile and less expensive substitute for semiprecious stones. This fish was made by trailing molten glass over a core made of a clay mixture. Next, colored rods of glass were wrapped around the body and dragged with a tool to create a fish-scale pattern. The body was then smoothed, the eyes and fins added and the core scraped out. 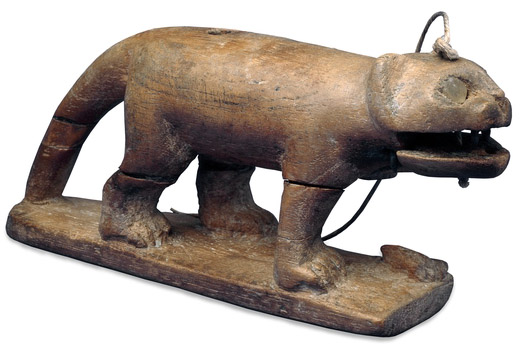 Cats may have been kept as pets as early as the fourth millennium B.C.E. Two wild species of cat lived in Egypt: the jungle cat and the African wild cat. By the late first millennium B.C.E. cats were bred on an industrial scale for use in the cult of the cat goddess Bastet.

From the Twelfth Dynasty, cats are shown in tomb decoration, seated beneath the chair of the deceased, or accompanying him on a hunt in the marshes. There is a fine example of the latter type of scene in the tomb of Nebamun, showing a ginger cat catching birds in its mouth and with all four paws at the same time. Such hunting scenes may also represent the struggle between civilized humans and the forces of chaos, shown as wild fowl.

The cat had a similar role on the divine plane. In the funerary text called the Litany of Re, the sun god appears as a cat and battles the snake Apep. This serpent, a manifestation of the forces of chaos, attacked the solar boat as it passed through the night sky. The god overcame Apep by cutting him in two with a knife, allowing the sun to continue its journey to be reborn at dawn.

Learn more about Egyptian objects on the British Museum website

Cite this page as: The British Museum, "A bottle and a toy: Objects from daily life," in Smarthistory, August 29, 2016, accessed January 28, 2023, https://smarthistory.org/a-bottle-and-a-toy-objects-from-daily-life/.