The Erechtheion is perhaps the most complex building on the Acropolis. It houses shrines to several different deities, including Athena, Zeus and Poseidon. It is named for the mythic King Erechtheus who judged the contest between Athena and Poseidon for who would be the patron deity of Athens.

This caryatid is one of six elegant female figures who supported the roof of the south porch of the Erechtheion (figures who do the work of columns—carrying a roof—are called caryatids). The figure wears a garment pinned on the shoulders (this is a peplos—a kind of garment worn by women in ancient Greece). The drapery bunches up at the waist and pours over the belt. She stands in contrapposto with her left knee bent and pressing against the drapery The folds of drapery on other right side resemble the fluting (vertical grooves) on a column. She looks noble and calm despite the fact that she carries the weight of a roof on her head. The Erechtheion is a highly decorated and elegant Ionic temple. The scroll forms at the top of the column (the capital) and its tall slender profile indicate that this is the Ionic order. The column is formed of four pieces (known as “drums”) and is fluted (decorated with vertical grooves). Just below the scroll shapes (also called volutes) you see decorative moldings, including one called “egg and dart” (egg shapes alternating with V-shapes), and below that a ring of plant-like shapes—an alternating palmette and lotus pattern. 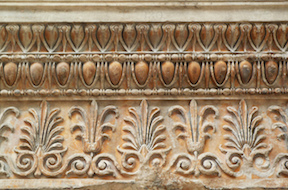 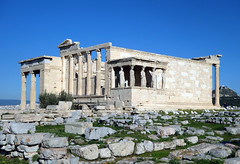 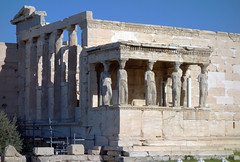 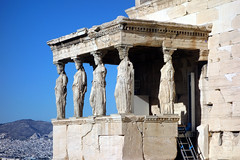 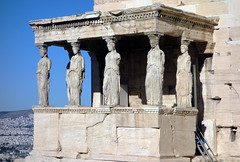 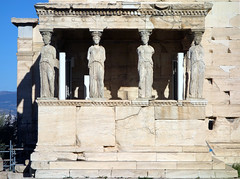 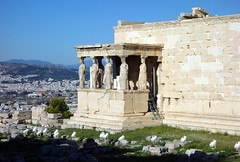 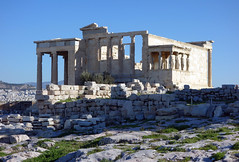 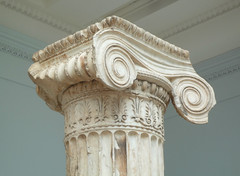 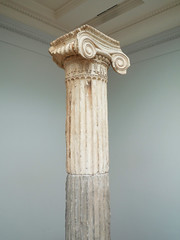 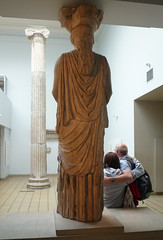 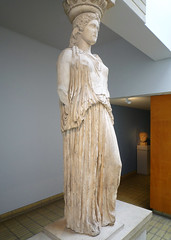 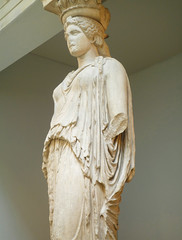