The Assyrian empire dominated Mesopotamia and all of the Near East for the first half of the first millennium B.C.E., led by a series of highly ambitious and aggressive warrior kings. Assyrian society was entirely military, with men obliged to fight in the army at any time. State offices were also under the purview of the military. Indeed, the culture of the Assyrians was brutal, the army seldom marching on the battlefield but rather terrorizing opponents into submission who, once conquered, were tortured, raped, beheaded, and flayed with their corpses publicly displayed. The Assyrians torched enemies’ houses, salted their fields, and cut down their orchards.

As a result of these fierce and successful military campaigns, the Assyrians acquired massive resources from all over the Near East which made the Assyrian kings very rich. The palaces were on an entirely new scale of size and glamour; one contemporary text describes the inauguration of the palace of Kalhu, built by Ashurnasirpal II, to which almost 70,000 people were invited to banquet. Some of this wealth was spent on the construction of several gigantic and luxurious palaces spread throughout the region. The interior public reception rooms of Assyrian palaces were lined with large scale carved limestone reliefs which offer beautiful and terrifying images of the power and wealth of the Assyrian kings and some of the most beautiful and captivating images in all of ancient Near Eastern art.

Silent video reconstructs the Northwest Palace of Ashurnasirpal II at Nimrud. Video from The Metropolitan Museum of Art

This silent video reconstructs the Northwest Palace of Ashurnasirpal II at Nimrud (near modern Mosul in northern Iraq) as it would have appeared during his reign in the ninth century B.C.E. The video moves from the outer courtyards of the palace into the throne room and beyond into more private spaces, perhaps used for rituals. (According to news sources, this important archaeological site was destroyed with bulldozers in March 2015 by the militants who occupy large portions of Syria and Iraq.)

Like all Assyrian kings, Ashurbanipal decorated the public walls of his palace with images of himself performing great feats of bravery, strength, and skill. Among these he included a lion hunt in which we see him coolly taking aim at a lion in front of his charging chariot, while his assistants fend off another lion attacking at the rear. The destruction of Susa In the Central Palace at Nimrud, the Neo-Assyrian king Tiglath-pileser III illustrates his military victories and exploits, including the siege of a city in great detail. In one scene we see a soldier holding a large screen to protect two archers who are taking aim. The topography includes three different trees and a roaring river, most likely setting the scene in and around the Tigris or Euphrates rivers.

Read a chapter in our textbook, Reframing Art History, about new approaches to Ancient Near Eastern art

Assyria from The Metropolitan Museum of Art’s Timeline of Art History.

Art of the ancient Near East from The Metropolitan Museum of Art’s Timeline of Art History. 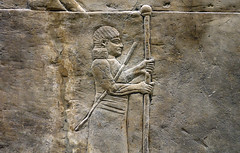 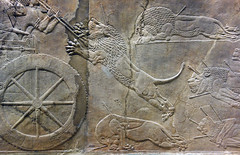 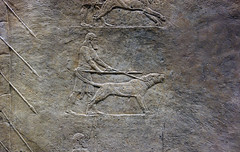 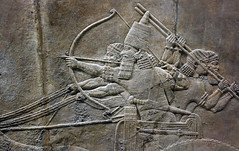 Cite this page as: Dr. Senta German, "Assyria, an introduction," in Smarthistory, May 14, 2019, accessed January 29, 2023, https://smarthistory.org/assyrian-art-an-introduction/.