The Bronze Age culture of Crete, called Minoan, after King Minos of Crete from Greek mythology, is one of the most vibrant and admired in all of European prehistory. The island itself is no doubt part of the story; at the watery intersection of Asia, Europe, and Africa, including snow covered mountain tops, lush agricultural plains, sandy beaches and dramatic gorges, Crete is exceptional for its natural richness and variety. The archaeological site at Knossos, with restored rooms in the background, Crete

The Bronze Age history of the island is one of development, increasing influence, and eventual destruction of a culture centered around sites that have traditionally been called palaces (the most famous and largest one of which was Knossos). Therefore, the historical periods of Bronze Age Crete are called the Pre-palatial, Old Palace (or Protopalatial), New Palace (or Neopalatial) and Post-palatial. Within these historical periods there are more specific designations, largely deriving from pottery studies, which use the terms Early, Middle, and Late Minoan. These then divided again into I, II and III and then into A, B and C. The early Bronze Age history of Crete, the pre-palatial era, began around 3000 B.C.E. This period is marked by large towns, evidence of foreign contacts through trade, as well as very elaborate burial practices: large above-ground multi-use tombs which seems to indicate the existence of elite families. During this period, the skill of Minoan goldsmiths and potters becomes well established, producing finely detailed jewelry and beautiful pottery. By around 1900 B.C.E., at the beginning of the Old Palace or Protopalatial period, the Minoan palaces were established, first at Knossos followed by Phaistos, Mallia, and Chania. Archaeologists have also discovered other smaller palaces at Petras, Galatas, and Monastiraki, although presently these sites are less well excavated and understood. These early palaces are extraordinary not only for the complexity of their construction but their striking similarity to one another, certainly a sign of a central administration of some kind. Built with large cut limestone ashlar blocks, Minoan palaces of the Old Palace period include a large open central court oriented north-south, storage spaces in the west of the structure, and a complex of decorated domestic rooms to the east which often feature elite details such as wall painting and indoor plumbing. Minoan pottery of this period, Kamares ware, much of it produced in palace workshops, was widely traded and has been found in Kahun and Harageh in Egypt, Ras Shamra in Syria, and several sites on the island Cyprus. The ruins at Palaikastro (photo: Panegyrics of Granovetter, CC BY-SA 2.0) The Old Palace or Protopalatial period of Minoan history ends in a dramatic event, an earthquake, around 1730 B.C.E., which was so severe that the palaces had to be rebuilt, which they were, in an even more grand manner (and a new palace is built at Zakros). This era is referred to as the New Palace or Neopalatial period. Lots of big settlement sites thrive during this era as well, such as Palaikastro, Gournia and Kommos, with close connections to nearby palaces. It is from this period that written documents survive. Clay tablets (marked in a script called Linear A) were used to keep administrative records at the palaces, recorded in a language which has yet to be fully deciphered. Pottery changes at this time as well, to feature marine animals, which perhaps reflects the sea power (thalassocracy) of the Minoans. Dating to this period are some of the most remarkable figural frescos of the Aegean Bronze Age, including those from Santorini, an island, very much under Minoan influence. During this era, the Minoans were players in the international politics of the Eastern Mediterranean as recorded in Egyptian tomb paintings of the 18th Dynasty in Thebes, which show Minoans bearing gifts for the Pharaoh.

The New Palace or Neopalatial era flourishes for two centuries. Then, beginning around 1500 B.C.E., Crete saw increasing influence from the Mycenaean culture of mainland Greece. Around 1450 B.C.E., over a period of approximately 50 years, nearly all sites on the island are burned and/or abandoned, including all of the palaces. This dramatic end to such a prominent and dynamic culture is remarkable and still essentially mysterious; was it natural disaster, social upheaval, extended draught, or some combination? 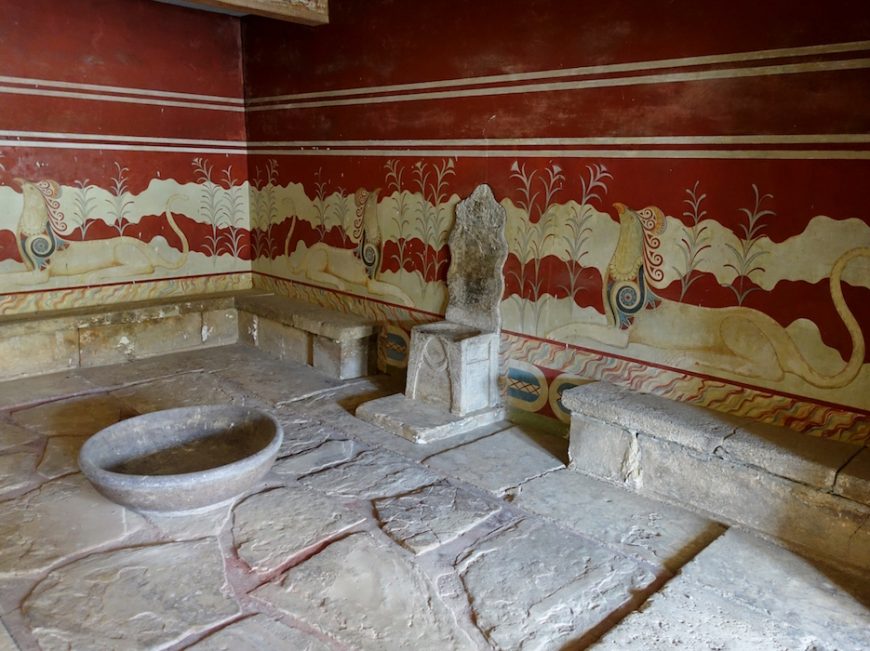 The era following this turmoil on Crete is called the Post-palatial period, which has a distinctively Mycenaean flavor. Knossos and Chania are the only palace sites which are rebuilt although with new Mycenaean architectural forms; this is the period to which the famous throne room at Knossos dates, which looks a lot like the throne rooms at Mycenae, Pylos, and Tiryns on Mainland Greece.

Most importantly in post-palatial Crete, a new script and language is used for administration, Linear B, which records an early form of the Classical Greek language, the same language and script which was used at Mycenaean sites on the mainland of Greece. What the texts describe is a theocratic society with a king (Wanax) and several high officials, priests, and priestesses who oversee religious ceremonies as well as the production of a massive and complex textile industry. This work employed over 700 shepherds harvesting between 50–75 tons of raw wool, woven by nearly 1,000 workers, men, women, and children, who produced some 20,000 individual textile pieces. New to Crete during this period is a warrior grave tradition. We find chamber tombs and shaft graves that include bronze vessels, swords, and daggers with the deceased interred on biers or in wooden coffins. This Mycenaean-influenced period of Crete comes to an end over a period of perhaps 100 years, during which sites are either burned or abandoned. By 1200 B.C.E., the island appears to be radically depopulated with only a very few small and simple settlements high in the mountains with no evidence of writing or even the use of the potter’s wheel.