Home to some of the earliest and greatest empires, the Near East is often referred to as the cradle of civilization. 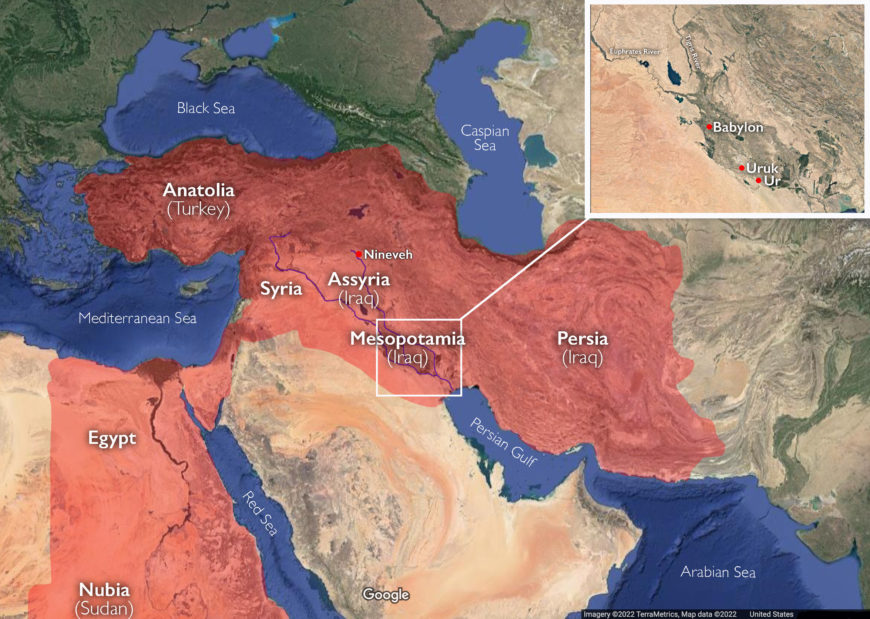 The cradle of civilization

Some of the earliest complex urban centers can be found in Mesopotamia between the Tigris and Euphrates rivers (early cities also arose in the Indus Valley and ancient China). The history of Mesopotamia, however, is inextricably tied to the greater region, which is comprised of the modern nations of Egypt, Iran, Syria, Jordan, Israel, Lebanon, the Gulf states and Turkey. We often refer to this region as the Near or Middle East.

Why is this region named this way? What is it in the middle of or near to? It is the proximity of these countries to the West (to Europe) that led this area to be termed “the near east.” Ancient Near Eastern Art has long been part of the history of Western art, but history didn’t have to be written this way. It is largely because of the West’s interests in the Biblical “Holy Land” that ancient Near Eastern materials have been be regarded as part of the Western canon of the history of art.  An interest in finding the locations of cities mentioned in the Bible (such as Nineveh and Babylon) inspired the original English and French 19th century archaeological expeditions to the Near East. These sites were discovered and their excavations revealed to the world a style of art which had been lost. The excavations inspired The Nineveh Court at the 1851 World’s Fair in London and a style of decorative art and architecture called Assyrian Revival.  Ancient Near Eastern art remains popular today; in 2007 a 2.25 inch high, early 3rd millennium limestone sculpture, the Guennol Lioness, was sold for 57.2 million dollars, the second most expensive piece of sculpture sold at that time.

The history of the Ancient Near East is complex and the names of rulers and locations are often difficult to read, pronounce and spell. Moreover, this is a part of the world which today remains remote from the West culturally while political tensions have impeded mutual understanding. However, once you get a handle on the general geography of the area and its history, the art reveals itself as uniquely beautiful, intimate and fascinating in its complexity. 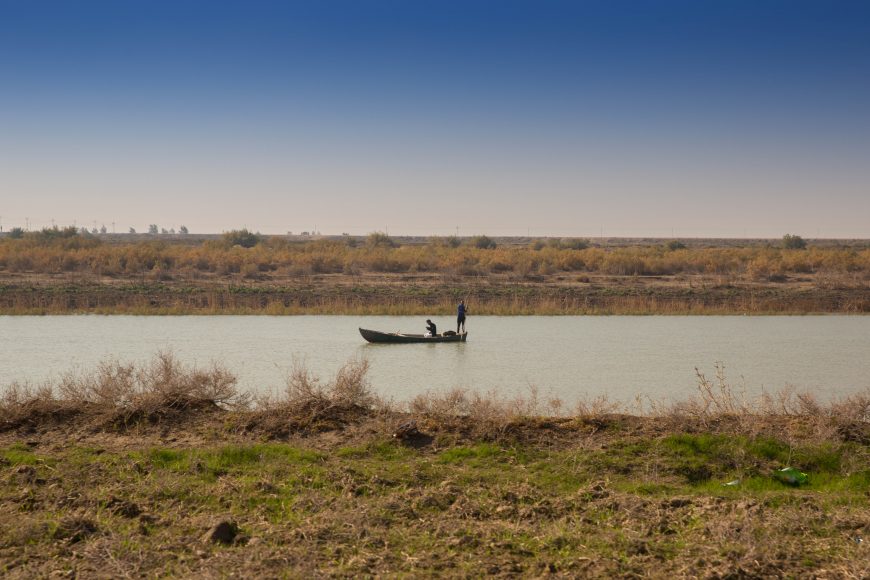 Geography and the growth of cities

Mesopotamia remains a region of stark geographical contrasts: vast deserts rimmed by rugged mountain ranges, punctuated by lush oases. Flowing through this topography are rivers and it was the irrigation systems that drew off the water from these rivers, specifically in southern Mesopotamia, that provided the support for the very early urban centers here.

The region lacks stone (for building), precious metals and timber. Historically, it has relied on the long-distance trade of its agricultural products to secure these materials. The large-scale irrigation systems and labor required for extensive farming was managed by a centralized authority. The early development of this authority, over large numbers of people in an urban center, is really what distinguishes Mesopotamia and gives it a special position in the history of Western culture. Here, for the first time, thanks to ample food and a strong administrative class, the West develops a very high level of craft specialization and artistic production.

Read a chapter in our textbook, Reframing Art History, about new approaches to Ancient Near Eastern art

Ancient Near Eastern Art at The Metropolitan Museum of Art 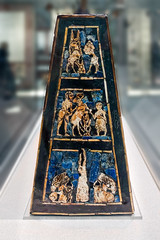 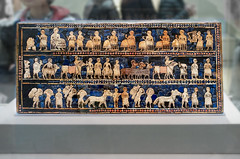 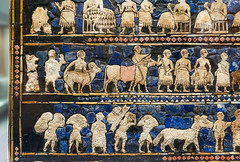